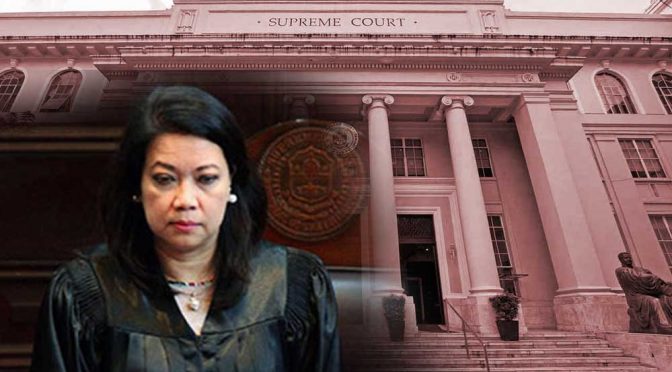 One by one, the Deep State stooges in the Philippines are removed from office, usually in disgrace for fighting it out even from a very weak position. Previously, it was Secretary of Justice Leila Delima, who herself was involved in the proliferation of methamphetamine to finance her 2016 senatorial campaign. This time around, it’s the Chief Justice of the Supreme Court, Maria Lourdes Sereno, who is removed from her undeserved position by her own peers.
Through the Supreme Court, the long arm of the Western Deep State has been removing legitimately elected sitting presidents who were not willing to toe the Western establishment line.
In the case of ex-CJ Maria Lourdes Sereno, her appointment to the Supreme Court was illegal from the very beginning due to her failure to submit the most basic requirement imposed on every government official of the land, i.e. the submission of Statement of Assets, Liabilities and Net Worth [SALN].
In addition to the above violation, among other questionable actions, the outgoing “Chief Justice” failed to pass the psychological examination prior to her appointment as Chief Justice. Her actions as of late even proved some of those findings of being mentally unfit to hold the position being sought after.

The report described Sereno as dramatic and emotional, and that “she appears energetic and all smiles and agreeable, but with religious preoccupation in almost all significant aspects of her life. She projects a happy mood but has depressive markers, too.”

Tria said: “Definitely, I won’t give her (Sereno) a 4 because of her marginal performance.”

“Her position requires diversionary thinking, she is limited on that, and on her personality, maintaining relationships…she has been failing on those. Her being emotional and dramatic affects the workforce,” she added.

Tria, however, said she did not see Sereno’s psychological exam.

“Based on the findings [of the psychologists], she is not recommendable [for the post of chief justice post],” she insisted.

Psychologists Caguingin and de Leon-Jamon, Tria’s former students, agreed with Tria but did not elaborate since they already expressed their opinions during the closed-door session.

The granting of the quo warranto petition was based on these facts, as opposed to sending her to the impeachment court instead, which is especially reserved only for qualified but erring government officials holding higher office in the country.
To put it simply, she is removed due to disqualification and not as a legitimate Chief Justice of the Supreme Court of the Philippines.

Sereno was appointed to the highest position of the judiciary as a mitigating measure of the Aquino-Cojuangco government that has been found to have caused multiple deaths through the midnight decision to purchase Dengvaxia vaccines victimizing 830,000 children, and to ensure the Aquino-Cojuangco family’s continued hold on large swaths of agricultural lands that have been awarded already to the sugar farmers as beneficiaries of the Comprehensive Agrarian Reform Program, which started in 1986.
The Hacienta Luisita Massacre is still fresh in the minds of these local farmers-survivors of the decades old atrocities of the Yellow Cult in the country.

More videos about the Yellow Cult crimes in the Philippines are available from the link below.

The granting of the quo warranto, as filed by the Solicitor General, is the Supreme Court’s way of evading the long process of impeachment, which could have surely put the judiciary again in a very bad light.
It must be understood that the late Supreme Court Chief Justice Renato Corona, whom Sereno replaced, died disheartened after he was unceremoniously impeached due to a supposed highly  questionable SALN after his court rendered a favorable ruling to the farmers in Hacienda Luisita, which eventually earned the ire of the Aquino government.
The remnants of the treasonous Aquino-Cojuangco administration and the Liberal party at large continue to suffer losses from all fronts. The people of the Philippines are winning in their quest for better governance through a peaceful, intelligent revolution.