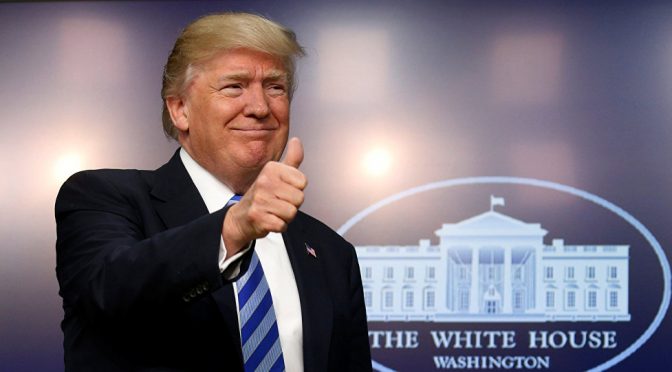 Seriously, would you buy a second-hand car from the American president? Anybody in their right mind would scoff at the unnerving risk of being sold something liable to splutter into a heap or be repossessed.
by Finian Cunningham
Not only that, but dodgy-dealer Trump has surrounded himself with henchmen who have a knack for threatening prospective customers with grievous bodily harm if they don’t cough up.
Farcically, the casino-merchant-turned-president is trying to entice North Korea into betting on giving up its nuclear weapons, with only the vaguest of American guarantees, and lots of sinister riders. These only weeks after Trump unilaterally tore up the American side of the bargain in the Iran nuclear accord.
You do have to wonder about the sanity in Washington. Can people be so unaware of their own incompetence and ineptitude?
Earlier this week, US Secretary of State Mike Pompeo delivered a snarling speech aimed at Iran, which can only be described as an ultimatum for surrender. Pompeo — supposedly America’s top diplomat — warned of the “toughest sanctions ever” that would make Iran struggle for economic survival.

After our withdrawal from #JCPOA, @POTUS asked me to achieve his goals on #Iran: 1. Apply the strongest possible financial pressure; 2. Deter any Iranian aggression; 3. Advocate for Iranian people; 4. Seek bold new steps with not only our allies & partners, but with Iran as well.

​He also said: “Iranian operatives would be crushed”. Given that Pompeo previously said he wanted to make the CIA more vicious that’s a sinister threat.
All this is because Washington, ironically, accuses Iran of “bad faith” over the landmark nuclear agreement.
North Korean leader Kim Jong Un would have to be clueless to do business with the Trump administration. There is absolutely no indication that the Trump White House has any scruples or awareness of legal obligations after it ditched the Joint Comprehensive Plan of Action (JCPOA) earlier this month — the UN-backed accord signed by Iran, Russia, China and the European Union in 2015.
Virtually everyone, including the UN watchdog, the International Atomic Energy Agency, has categorically vouched for the JCPOA as a successful working deal for nuclear arms control. It is only the US and its dubious client regimes in Israel and Saudi Arabia asserting that Iran has violated the JCPOA, citing tendentious claims of Iranian malign activity. Claims, it should be said, which are made by arguably the most malign clients in the Middle East.
The Iran nuclear agreement took years to negotiate. It is said to be one of the most complex treaties ever produced in terms of rigorous checks and balances. Yet Trump thinks he can trash it and come up with something better, like, Iranian surrender to American diktat.

America is blessed with extraordinary energy abundance, including more than 250 years worth of beautiful clean coal. We have ended the war on coal, and will continue to work to promote American energy dominance!

​The false claims made by Trump and Pompeo alleging Iranian non-compliance with the accord, as well as other alleged transgressions of sponsoring terrorism, are so out of touch with facts and indeed are such an arrogant inversion of reality — the US sponsoring terrorism in Syria, for example — it means that this administration is hopelessly bereft of any intelligence or trustworthiness.

Remember how badly Iran was behaving with the Iran Deal in place. They were trying to take over the Middle East by whatever means necessary. Now, that will not happen!

​Trump and his cabinet are woefully misinformed and ignorant about the world. Nothing they say can be taken with any credibility.
Moreover, Team Trump’s attitude is that of a Mafia don. If you don’t like our insulting terms, then expect the boys coming around soon with some rough action, like having your nation “totally destroyed”.
Indeed, Kim’s belated casting of doubt on whether to meet Trump for a supposedly “historic summit” next month in Singapore is for the sound reason that the North Korean leader has simply lost trust in the American agenda, not as American media make out due to “typical” North Korean backtracking.
Last month, Trump’s National Security Advisor John Bolton brazenly referred to the “Libyan model” as a guideline for how the Trump administration was approaching negotiations with North Korea. That is, for complete capitulation on nuclear weapons with nothing in return from the American side. We all know what happened to Libyan leader Muammar Gaddafi. Only a few years later, his nation was destroyed by a seven-month US-NATO blitzkrieg and he ended up murdered with a bayonet.
That shows how criminal and arrogant the planners in Washington are. They have the gall to publicly cite the “Libyan model”.
It also shows how conceited they are. The Americans must think that North Korea’s Kim is ready and willing to prostrate himself in front of the president and “cry, Uncle Sam”.
Washington has totally misread Pyongyang — and not surprisingly given the former’s delusional self-importance.
North Korea is not going to give up its nuclear weapons without the US side also rightly making some major concessions, primarily scaling back its military presence in the region and giving up its decades-old threats of regime change.
Used-car salesman Trump tried to do some damage limitation after his henchman John Bolton flexed the rhetorical knuckles. Trump claimed the US was “not following the Libyan model”. Well, would you believe that from a wheeler-dealer president who has lied through his teeth about paying off a porn star? And who has spewed a load of lies to justify ripping up the Iran deal?
Call it incompetence, stupidity or downright arrogance, but Trump then blew his “assurance” to North Korea by blurting out that if Kim doesn’t play ball on denuclearization then his country would be “completely decimated”.
No wonder the world is shuddering with contempt and derision for American politics. After decades of waging illegal wars and murdering millions of people, destroying once stable nations and spawning terrorism, the Americans have the audacity to lecture others about “destabilizing activities”.
The Americans have even taken to threatening their supposed European “allies” with punitive sanctions if they dare to do business with Iran or Russia.
Washington is an out-of-control rogue regime that has not a scintilla of shame for the way it is ransacking international law and obligations. The only country to have ever used atomic weapons on civilians has the brazen, deluded temerity to demand that others surrender in the name of “peace”.
Ripping up accords is a specialty of the US rulers from the time that Native Americans were driven off their lands into oblivion.
Now we have The Donald supposedly proffering “deals of the century” in the Middle East and to North Korea. This is the same conman who notoriously rips off cleaning maids, barmen and other workers who have been employed in his gaudy hotels.
Washington’s credibility or integrity has never been too reliable. But now under Trump’s “dealership”, the American vehicle has no wheels, no brakes, no warranty, faulty airbags, and is liable to run over a cliff edge.

Trump’s dumping of the Iran Nuclear Deal is to extract more concessions from the global dollar dumping efforts led by the Eastern Alliance. His position in the genocidal operations in Palestinian lands and Yemen by Israel and Saudi Arabia respectively is meant to achieve the same goal.
Tearing concluded agreements apart is what bullies do when the situation after the fact turned out to be adversarial to them. Unfortunately for the US president and the Deep State, while the Eastern Alliance is only aiming for multipolarity and not another hegemony, the latter also has all the geopolitical, geo-economic and military advantage.

14 thoughts on “Trump Sells Peace Like a Dodgy Dealer”