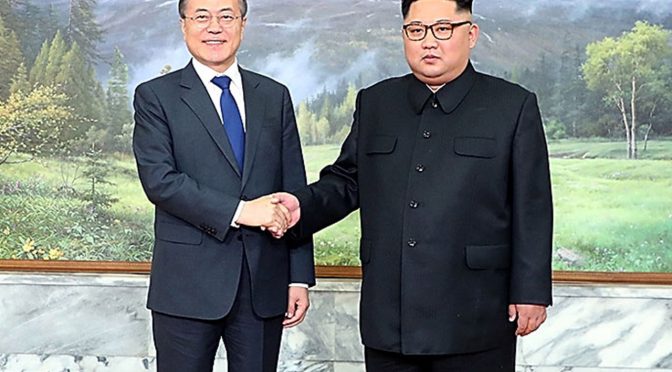 While the non-essential parties are busy trying their best to stop the official Korean Reunification, the two leaders of both sides in the Korean Peninsula are holding talks like this will be the last time that their people can have a long lasting peace across the two Koreas.
According to Adam Garrie on 2018-05-26:
It is being reported that DPRK head of state Kim Jong-un has held a private meeting with South Korean President Moon Jae-in on the 38th parallel which divides the two Korean states. Unlike their first meeting which was an incredibly public affair complete with pomp, ceremony and scores of cameras, today’s meeting was held in private in the aftermath of both the DPRK’s destruction of its former nuclear testing facility and Donald Trump’s infamous “cancellation” of talks with Kim Jong-un.
Today’s meeting is indicative of two things which are not mutually exclusive. First of all, it demonstrates that the Asian authored, owned and executed peace process can and will move forward in spite of the obvious internal divisions in the US regarding support (and lack there of) for the peace process. Secondly, with Donald Trump yesterday dropping a hint that all sides are “playing games” and that the Singapore summit between the two leaders may still be conducted, it could well be that the 12 June meeting between Trump and Kim or one held around the originally proposed date may in fact still happen.

South Korea was quick to nominate itself as a mediator between Pyongyang and an increasingly hostile Washington dominated by the arch-hawk John Bolton along with fellow neocons Vice President Michael Pence and US Ambassador to the UN Nikki Haley. South Korea gave every indication that it was as disappointed with John Bolton’s threat to turn the peace process in Korea into a “Libyan scenario”, as was the DPRK, China and Russia, all of whom rejected the provocative threat issued by the infamously unreasonable and undiplomatic Bolton.
As I predicted, Moon Jae-in’s dignified handling of “Libyagate” has paid off as Seoul’s sincerity in support of a peace process which stands to benefit South Korea more than any other state, has now been proved in spite of US dithering. This helps establish the fact that both Korean states seek to work together in pursuit of the penultimate aim of singing a formal treaty to end the Korean War/Fatherland Liberation War, while also actively pushing for a situation on the Korean peninsula where caution and distrust give way to economic, cultural and diplomatic cooperation between a single Korean people.
That being said, it is also highly likely that behind the scenes, the technically “cancelled” summit between the leader of the DPRK and his US counterpart may in fact be back on. It always appeared to be the case that Donald Trump wanted his moment of geopolitical glory in being the first sitting US leader to shake hands with a DPRK head of state. In so far as this is the case, it would appear that Bolton and his fellow neocons sabotaged the meeting against the wishes not only of the DPRK, South Korea, China and Russia, but against the wishes of Trump himself, even though Trump may yet get his much coveted Kim Jong-un selfie.
According to a report from South Korea’s Presidential spokesman,
“The two leaders exchanged their opinions candidly to implement the April 27 Panmunjom Declaration and to have a successful North Korea-U.S. summit… Moon will announce the result of today’s meeting at 10 a.m. [01:00 GMT] Sunday”.
It would appear therefore that the world is now hours away from what is highly likely to be a positive announcement from Korea regarding a peace process in which the US is increasingly a passenger rather than a driver, thanks both to the fact that the peace process is being managed and conducted by Asian powers themselves, in addition to the fact that while Donald Trump wants his moment of symbolic victory, other figures in Washington want no victory at all – symbolic or otherwise.
After the meeting, South Korea released an official video of the two leaders exchanging greetings, complete with DPRK soldiers in uniform on the southern side of the border, in an indication of the willingness of both countries to open doors to one another.
https://www.eurasiafuture.com/2018/05/26/kim-jong-un-and-moon-jae-in-hold-second-meeting-away-from-cameras-as-peace-process-moves-forward/