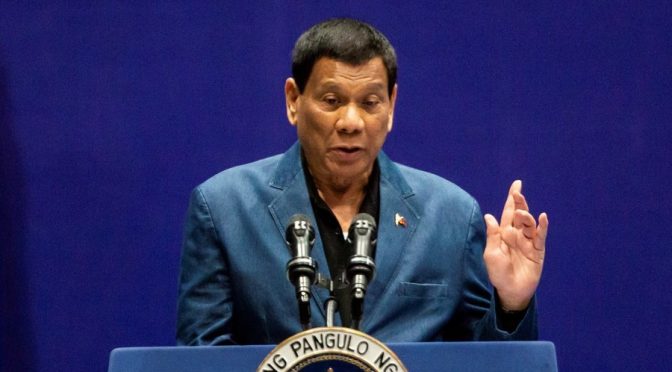 While the Philippines is undergoing its own brand of peaceful reforms, it cannot be denied that the defeated agents of the Imperial Crown and the Puppet Masters are still inside the country, trying their best to malign the president from time to time. Fortunately, the president is not letting every shot in the bow unanswered.
He recently asked the most fundamental question, “Who is this stupid god?,” which reminds us of the good old George Carlin…

This latest tit for tat is sure to occupy the airwaves for some time, but it is always good to remind the country of how the Jesuits operate through the CIA and various NGOs to undermine even the most popular government in the country to date.
There is an ongoing effort to forge a unified action between the Vatican Church and the Communists to topple Duterte from power. That should not come as a surprise looking back the country’s history with the foreign occupiers. This should also explain why the CPP founder, Jose Ma. Sison, is enjoying his retirement in Europe instead of North Korea or China, while his cadres provide the funding through the “revolutionary taxes” regularly collected through banditry in the countryside.
It is not too far fetched to say that the church is providing support to the communist organization considering the fact that several of its priests have acknowledged themselves to be members of the movement.
The Philippines’ most popular president ever is doing his best to wake up his people to the true nature of the enemy by shaking the foundation of the country’s subservience to the Vatican. Will he survive the last 4 years of his term?

Covert Operations and the CIA’s Hidden History in the Philippines

Together with the National Security Agency, the CIA also maintains “Project Echelon,” the most sophisticated and the most technologically advanced eavesdropping system that has ever been devised. Through a relay system of satellites and spook stations in Australia, New Zealand, United Kingdom, Canada and United States, the US intelligence system is able to intercept all telephone, fax, e-mail, Internet and cellphone transmissions worldwide. Its nerve center is located at Fort Meade in Maryland where the NSA maintains its headquarters. This has grave implications for both our public and private security.
The National Security Agency (NSA) of the United States has developed a global surveillance system, Echelon, which is a powerful electronic net operated by super-computers that intercept, monitor and process all phone, fax, e-mail and modem signals. The European Parliament in a 1998 report entitled, “An Appraisal of Technologies of Political Control” has listed serious concerns and has recommended an intensive investigation of US-NSA operations. The NSA Echelon system provides awesome potential for abuse against civilian targets and governments worldwide, even against allies of the United States.
It can be recalled that under the 1999 Visiting Forces Agreement (VFA), the coverage for special privileges and criminal immunity includes not only US armed forces personnel but also “civilian personnel who are employed by the US armed forces and who are accompanying the US armed forces.” These US “civilians” include technicians of the secretive US National Security Agency which, during the existence of the US bases here, operated the spy communications facilities at Clark, Subic and Camp John Hay, among others. (Simbulan, 1985) All private citizens’ and government communications are intercepted and monitored by the Echelon System.
According to Nicky Hager’s book, Secret Power (1986) which deals with the international electronic spy network, the US has not only been using its NSA Echelon system to collect political, military and economic intelligence against its enemies, but it also targets its own allies. According to Hager:
“…there is extensive interception of the ASEAN countries, including the Philippines….ASEAN meetings receive special attention with both public and private communications of these countries being intercepted to reveal the topics discussed, positions being taken and policy being considered.”
Through the Visiting Forces Agreement (VFA), the US plans to fully restore its Echelon system in the Philippines which was greatly interrupted by the pullout of US military facilities and bases in 1992. The CIA heavily relies on the Echelon Project for its technologically advanced Signal Intelligence or SIGNIT, which is managed by the US National Security Agency (NSA).

Every CIA station is virtually an infrastructure for political, military, cultural and even economic intervention. In the Philippines, the CIA has not only functioned as a listening post but has been actively used to engage in covert operations, sabotage and political intervention to undermine Philippine sovereignty and self-determined national policies. Former CIA operatives in the Philippines confirm the use of official “diplomatic covers,” especially in the political section of the US Embassy where they are given secure communications, protected files and diplomatic immunity. They have also used “non-official covers,” disguised as businessmen in US firms. Covers under the guise of US naval or air force personnel are now minimal after the US bases and military facilities in the Philippines were dismantled. But as we can now see, the CIA has long been operating with virtual impunity and has always gotten away with its deep involvement in Philippine domestic affairs. Shall we allow this continued intervention in Philippine political and economic life?
Bibliography
Books

Thank you very much, Wilson.

10 thoughts on “Will Duterte Survive vs. the Jesuit, CIA and Communists?”