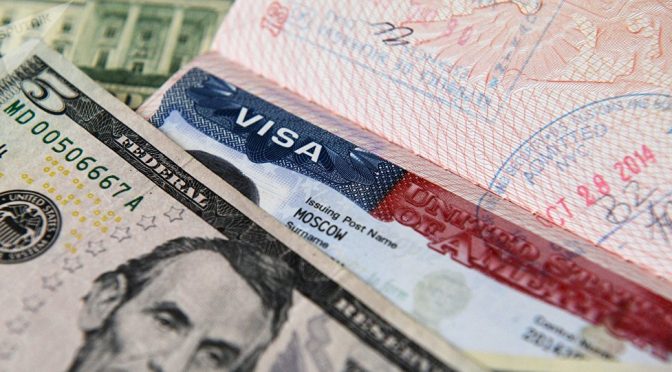 The US economy is by no means facing a “doomsday,” so says Wall Street analyst Charles Ortel, commenting on the reports about the steadily increasing US national debt and trade deficit. According to the analyst, the system could be fixed and President Donald Trump knows how to do it.
by Ekaterina Blinova
The soaring US national debt is triggering concerns among US businessmen and officials, who call it nothing short of the “biggest domestic threat.”
“I think we’re headed over the edge,” Andy Biggs, a conservative Republican congressman told Fox News in mid-June. “Think of it as a waterfall, we’re in the boat, and now we’re almost at the point where we can’t get out of the flow. We’re heading over unless we do something immediately.”
Meanwhile, the Congressional Budget Office (CBO) and the US Office of Government Accountability (GAO) has warned the US Congress that the country’s federal deficit is likely to reach $1 trillion by 2020, adding that the country’s debt-to-GDP ratio may skyrocket to 106 percent within 14 to 22 years.
Admitting that the aforementioned fears are not groundless, Wall Street analyst, investor and investigative journalist Charles Ortel asserted to Sputnik that “doomsday” is nowhere near.
According to the analyst, the Trump team knows how to fix it.
“Compared to other nations, the US position in 2018 is far less precarious, particularly given steps taken since January 20, 2017 and continuing by the Trump Administration,” he stressed.
Ortel explained that the Trump administration inherited challenges that President Obama had failed to address during the eight years of his rule while simultaneously weakening what remained of the US’ international standing, and almost waging a “war on capitalism” itself.
“Yes, Americans need to wean ourselves from borrowing, and yes, we need to introduce fiscal discipline particularly to our slew of federal, state, and local governments that spend more than $6 trillion per year,” Ortel highlighted.
The analyst has drawn attention to the fact that even before Trump’s inauguration, investors showed their support for reversing Obama (and Bush Senior/Bill Clinton/Bush Junior) policies “by bidding prices of most equity securities up substantially.”
“Quickly, investor enthusiasm then proved well founded, as the Trump team tore through and tore up the damaging and ill-conceived regulatory/administrative state, and achieved historic reforms especially including with our cumbersome tax system,” the investor elaborated.
Time to Bring an End to ‘Unregulated Globalism’
According to Ortel, the roots of the current economic problems go deep into the 2000s and the 1990s.
“Since 2001, the United States government has squandered several trillions of dollars on foreign military initiatives, and wasted even more money on ill-conceived domestic spending programs,” the Wall Street analyst explained. “Meanwhile, American private borrowers (households, companies, financial institutions) have changed their attitudes towards debt, becoming far more comfortable maintaining high and increasing levels of debt in an environment where US dollar interest rates declined and still remain low.”
The analyst believes that to get out of the danger zone, the US must disrupt its dangerous adherence to “unregulated globalism,” promoted by neoliberal economists.
He highlighted that “this [globalist] project, begun around 1988, has created an international network of current and former political leaders who seem interested to weaken influence of national governments, while promoting regional and international bureaucracies.”
The scheme was aimed at enriching multinational conglomerates and their political cronies, by no means benefitting the middle and working classes.
Trump’s Opponents Throwing Sand in the President’s Gears
Commenting on the alarm raised by left-leaning MSM regarding the US economic difficulties and the Trump strategy, the analyst remarked that “what the corporate-owned mainstream media should have noticed were [the] origins of our present woes.”
“Root causes include: the internet bubble, the housing bubbles, and the ill-advised decisions by the U.S. central banking system and foreign counterparts to suppress benchmark interest rates since January 1, 2009. Central bank intervention gave the illusion of progress and recovery, when private sector incomes (per person) have not grown since 2001 anywhere near the rates seen during the greatest boom ever (1982 through 1998/9),” he pointed out.
According to the investor, it is quite probable that Trump opponents will use the present economic problems as arguments against Trump and Republican candidates in the looming November 2018 elections.
“Here, I would note that speculators including George Soros and other Trump-haters have reaped billions in profits before betting against governments around the world,” he said. “It would not surprise me at all that many are now betting against Donald Trump’s recovery plan.”
However, “freed from yokes placed on entrepreneurs and job creators by past administrations, Americans are stepping up and building back stronger than ever,” the Wall Street analyst concluded.

9 thoughts on “Why Soros is Betting Against Trump's Recovery Plan”