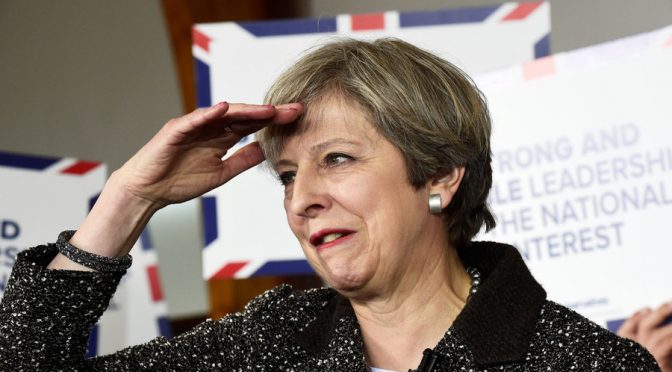 The UK govt is falling apart, but as PM May sinks, she still calls out ‘look over there’ at Russia.
“One must have a heart of stone to read the death of Little Nell without laughing,” Oscar Wilde said on the Dickens story. The disintegration of this incompetent administration makes me laugh – clearly my heart isn’t hard enough.
And this even as I agree with Mrs. May’s departing cabinet heavyweights: Boris Johnson the foreign secretary, David Davis the Brexit secretary, Steve Baker the Brexit minister  – whilst despising them on every other matter. Even a stopped clock is right twice a day.
It is true that Mrs. May has supported the Brexit decision by 17.4 million people, the largest vote for anything or anyone in British history, as the rope supports the hanging man. And she hopes to see it dangle to death.
It is true that her elaborately constructed ‘Chequers Agreement’ (Chequers is the Country House of British prime ministers) would have left Britain a Vassal State of the European Union, a rule taker forever, from a sclerotic neo-liberal protectionist bankers ramp which has impoverished half of Europe and enraged maybe most of the other half.
It would have left Britain effectively in the Customs Union effectively tied to the single market and subject to endless harassment by the European courts on trade matters. It would have neutered the possibility of a new British internationalism which an incoming Jeremy Corbyn Labour government would want to advance. And perhaps above all, the British would continue to be dominated by a financial and economic orthodoxy presided over by people we didn’t elect and cannot remove.
Events are moving fast and this article may have to be updated. Three cabinet members (and counting) have resigned. Other minsters and their aides, too. The prospect of a leadership challenge are now more likely than not, even though the clock is ticking steadily toward Brexit Day next March.
I have been here before.
On November 13, 1990, I sat on the green benches of the British Parliament and watched a previous foreign secretary, Sir Geoffrey Howe, in his resignation speech, snap Prime Minister Margaret Thatcher – the Iron Lady – like a twig with a series of devastating metaphors which had the whole House wincing and laughing in equal measure.
The whole House – that is, except Mrs. Thatcher, who left the chamber that day a broken woman – opened, wide open, to an inevitable leadership challenge, which duly forced her from power after a decade of unassailability.
The resignation letter from Boris Johnson – the speech is yet to come – is equally devastating. And may well lead to the same outcome. And Mrs. May has not the mettle of Mrs. Thatcher – more ‘tinfoil’ lady than ‘iron’.
As the government sinks in a morass of its own making, however, it has become increasingly reckless with its ‘look over there!’ tactics of diversion.
Discombobulated by the surge of respect, even affection for Russia in Britain (always far higher than the elite were ever prepared to acknowledge) as a result of the best World Cup in living memory, the Theresa May government has doubled down on its discredited state narrative over the Salisbury-Skripal affair.
The death of an indigent homeless woman in nearby Amesbury has seen ministers, press, and even Blairite Labour MPs return to their anti-Russia campaign like a dog returning to its own vomit.
The 44-year-old mother of three, Dawn Sturgess, was both an alcoholic and a heroin user, living in a hostel, but with a boyfriend – Charlie Rowley. He, too, is literally clinging to life in intensive care.
This sorry, tragic story has been the casus belli for a new wave of attacks upon Russia and even President Putin.
Grown men and women, educated men and women, working in media and politics in Britain are actually seriously speculating that Russian assassins sought to murder this tragic couple. And that the president of Russia, in the closing stages of Russia’s triumphant World Cup, ordered the hit!
The Amesbury story has even more holes than the Skripal story – and that is saying something.
I will return in depth to those holes and that story on another day, but I wanted to leave you with, if you will pardon the pun, a taste of it.
Such was the parlous lifestyle of this poor couple we are told that they were often seen raiding dustbins and skips for what they could use or sell. But also that they were in the habit of picking up discarded cigarette butts in the streets of Salisbury.
For three full days last week, the Daily Mail – Britain’s most successful newspaper – actually ran the story that one of those cigarette butts may have been laced with “Russian” Novichok. The whereabouts of the dead body of the smoker of the rest of the cigarette is presumably still in the Salisbury undergrowth!
George Galloway was a member of the British Parliament for nearly 30 years. He presents TV and radio shows (including on RT). He is a film-maker, writer and a renowned orator.

9 thoughts on “The UK Gov’t is Falling Apart”