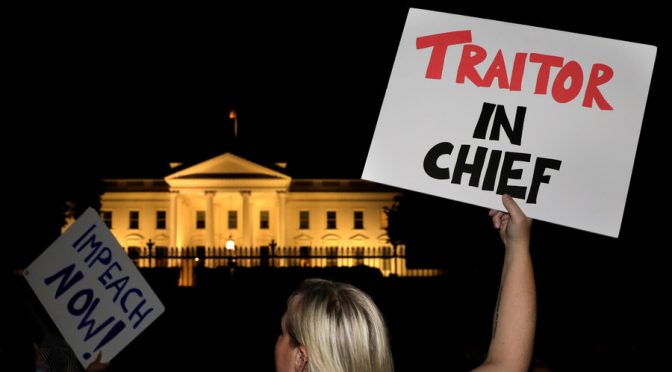 The unhinged rhetoric of American liberals and neocons over Donald Trump’s meeting with Vladimir Putin in Helsinki is deeply repugnant and strangely disorienting.
This is especially the case for someone my age, born less than a decade after the United States Air Force vaporized hundreds of thousands of civilians at Hiroshima and Nagasaki, a year after the US had killed almost a quarter of North Koreans, who watched as a teenager the US scald and incinerate millions of people in Indochina.
“The darkest hour in the history of the American presidency,” Garry Kasparov crystalizes the madness of US politics at this hour as the liberal classes collectively lose their minds. Darker therefore than Pearl Harbor, darker than 9/11?
Let it be imagined that Kasparov’s moves are but those of an embittered exile, let’s compare his words with those of Anderson Cooper of CNN who tweeted the words of Sen John McCain: “No prior president has ever abased himself more abjectly before a tyrant.”

"No prior president has ever abased himself more abjectly before a tyrant" – @AndersonCooper reads @SenJohnMcCain's powerful statement in the aftermath of the Trump-Putin summit https://t.co/R1KnUV9ne4 pic.twitter.com/jMFmhnLIe3

Or faded entertainment star liberal Bette Midler, who tweeted: “He (Trump) should be arrested as soon as Air Force One Disgorges him.” All written in capital letters in proverbial green ink.

HE SHOULD BE ARRESTED AS SOON AS AIR FORCE ONE DISGORGES HIM.

From the crazed neo-cons embedded in America’s deep state, all the way to the pussy-hat liberals of the left, a hysterical peal of rage has emerged in the wake of Helsinki with the hashtag #TreasonSummit trending all day in the Twitter-sphere.
No historical memory seems to exist amongst the teenage scribblers of the warm meeting between US President General Dwight D. Eisenhower and Nikita Khrushchev in 1959 just three years after the Soviet intervention in Hungary, or Leonid Brezhnev and Richard Nixon four years after the events in Czechoslovakia (let alone Nixon and Chairman Mao Tse Tung).
No-one seems to remember either Ronald Reagan’s “Walk in the Woods” with Mikhail Gorbachev which averted a race towards nuclear conflict between the superpowers.
True, all three of these were Republican presidents but the difference is that liberals and progressives were cheering the counter-intuitive peace-making efforts of their right-wing presidents. Then.
So, what was the proximate cause of this collective shriek over Helsinki which emanated from the US, but had its echo in the halls of liberalism everywhere?
That Trump said that it is better that the US and Russia, the two predominant keepers of the world’s nuclear weapons, “should try to get along”? Or was it that he said that maintenance of such nuclear stockpiles “was a bad thing not a good thing”?
What sane human being could possibly disagree with these two statements, never mind a liberal, a progressive, a leftist?
Was it his evident disbelief in the righteousness of the CIA and the FBI? Again what kind of leftist elevates the deep-state agencies in America to sainthood? In decades gone by (as late as the George W Bush era, with his Patriot Act et al) it was an article of faith on the left side of politics that these very agencies were the enemies of democracy in America.
Indeed Michael Moore in his epic movie ‘Fahrenheit 911’ included a long section on the very same agencies and their domestic spying and internal subversion of peaceful opposition movements in America. Today’s Moore wants Trump to be arrested by the agencies he so recently excoriated. He tweeted – and I’m not making this up – “The Commander-in-Chief is a traitor” and stopped just a fraction short of calling for a military coup.

Trump is asked, Who are you going to believe—the Russians or your own officers? And he refused to choose! Do you support your troops or Putin — and he wouldn’t choose! So my first thought goes out to those who serve this country— I’m so sorry the Commander-in-Chief is a traitor.

All of this stems from the deep sense of denial on the left side of US politics. Denial and guilt.
Their denial of a truth self-evident – that the Democrats fielded the only candidate in America who could possibly have lost to Donald Trump. Their guilt – that they colluded before or after the fact to rob the electorate of the chance to vote for the candidate most likely to have won them the presidency, Bernie Sanders.
That their sordid maneuvering in the dark was revealed via WikiLeaks is something they have never forgiven. Their rigging of the Democratic Primary process on behalf of Hillary Clinton is now scarcely denied but like Lady Macbeth’s damned spot it will not out. And all the expensively donated perfumes of Arabia will not expunge it.
No-one can tell how this most bizarre of chess games in Washington will play out, least of how it will end. With the monkey of Mueller on his back, Trump can do nothing meaningful on the international stage, neither in pulling back from expensive and dangerous conflicts around the world or bringing the era of ‘nation-building’ and ‘regime-change’ to a close as he said he would during his election campaign.
The big question is “How will it play in Peoria”? In fly-over country, in the rust-belt, across the prairies in two years’ time (if Trump can get there) when he seeks re-election as he confirmed he will during his visit to Britain last weekend.
As the first, and for a time the only, man in public life who predicted Trump’s presidential victory, I am in no doubt at all. They shouldn’t throw away their pussy-hats and their blow-up dolls because they will be marching against President Donald Trump for a long time to come.
George Galloway was a member of the British Parliament for nearly 30 years. He presents TV and radio shows (including on RT). He is a film-maker, writer and a renowned orator.
https://www.rt.com/op-ed/433498-helsinki-trump-treason-summit/

8 thoughts on “Denial & Guilt: US Liberals Losing Their Minds Over #TreasonSummit”