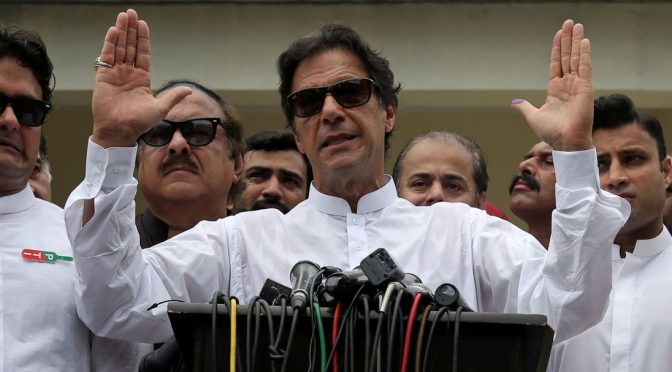 Pakistan has for decades been a victim of the classic “divide and conquer” tactics of the West through the scourge of religious extremism and as a launching pad for the corporate US military invasion in Afghanistan, with little to no benefit to the Pakistanis.
The outgoing pro-US center-right conservative party, Pakistan Muslim League led by Shehbaz Sharif has been accused of plundering the wealth of the nation by both Khan’s political party and the Pakistan Army itself.
It is expected that Imran Khan’s government will continue Pakistan’s economic cooperation with China, while prosecuting all corrupt officials of the oligopoly through the judiciary that has grown tired of corruptions over the years.
According to the former Pakistan President, Pervez Musharraf, the Sharif’s family has been hoarding their loot into Dubai and London. Of course, we all know that once the plundered sovereign assets reached the shores of the Anglo-Saxon Empire, it will never be expected to be expatriated soon.

Incoming Prime Minister Imran Khan is truly a breath of fresh to Pakistan’s political landscape as he is one of the rare personalities who is not marred with allegations of corruption like many of his peers. Most importantly, he understands the true face of the enemy.
“There is a problem, unfortunately, that the American policy of using a one-dimensional military solution to problems in Afghanistan has led not only to the longest war, but it has caused immense problems to Pakistan…
I started this struggle 22 years ago and thankfully today I have been given a chance to fulfill what I dreamt for the country.” “We will run Pakistan like it’s never been run before.”
As a snapshot to who Imran Khan is, the soon to be repatriated Wikileaks founder, Julian Assange, interviewed the man of the hour back in 2012…

As usual, you will know it when the Deep State is in panic when the Western controlled media starts spewing vitriol over to someone that they are not happy with.
Khan is now being labeled as a mere puppet of the Pakistan Army – a puppet who is not planning to go along the Western military solution to their own created problem euphemistically as global terrorism.
So, our sincerest gratitude goes to the people of Pakistan for helping decapitate the Deep State’s influence in the region.
Congratulations!