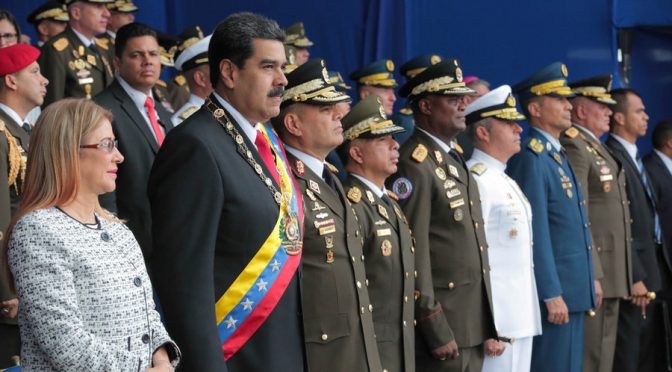 Venezuelan President Nicolas Maduro has been targeted in an attempted attack during a televised public address, officials confirm. Several explosives-laden drones detonated as he was speaking at a military ceremony.
Venezuela’s Information Minister Jorge Rodriguez has confirmed that an attack on Maduro took place at the event. Several drones rigged with explosives went off close to the presidential box during the address.

“All the investigations have indicated that (the explosions) were an attack on President Nicholas Maduro,” Rodriguez told media.
Maduro has been moved to safety and is carrying on with his duties, he said. Seven National Guard soldiers have been injured as a result of the failed assassination, according to Rodriguez. The extent of their injuries has not been revealed.
“It was an attack to kill me, they tried to assassinate me today,” Maduro himself stated following the assault.
“That drone was coming for me.”

In the video from the scene, the leader and the officials standing beside him could be seen looking up in the air seconds before the address was cut off. The feed then cuts to a wide shot of the gathered servicemen, who break formation and start scattering.

Providing details of the incident, Rodriguez specified that the explosions struck at 5:41 local time, and several flying devices loaded with explosives were shot down by the presidential guard.
Maduro was speaking at the event marking the 81st anniversary of the Bolivarian National Guard (GNB), a branch of the country’s armed forces, when the incident took place.
Later in the day, unconfirmed media reports indicated that a splinter group called ‘Flannel Soldiers’ claimed credit for the attack. Spain’s El Mundo newspaper cited a Twitter account under a similar name which alleged “the operation was to fly drones loaded with C4,” but said they were shot down by the presidential guard before reaching their target. The account also uploaded what it said were photos of the attack. There is no official confirmation that the claims are true.
According to Gregory Wilpert, co-founder of Venezuelanalysis website, those who orchestrated the plot hoped that “the military would rise up against the president and would take it as an opportunity to organize a coup and overthrow the government.”
In a televised address delivered earlier on Sunday, Maduro pinned the blamed on the “Venezuelan ultra-right,” who collaborated with Colombian rightists. He also accused Colombia’s president, Juan Manuel Santos, of being behind the attack. Sponsors of the assassination attempt reside in Florida, according to Maduro. Colombia’s ministry of foreign affairs has brushed off the allegations.

The Deep State’s insatiable thirst for Venezuelan oil has gone worst while watching how Venezuela survived its financial attack against the local currency with Russia and China’s help.