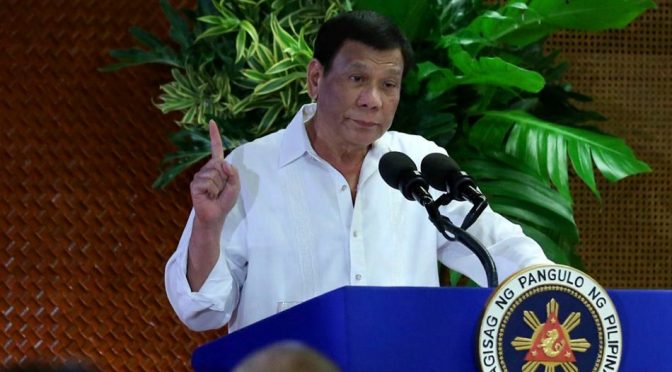 “It’s hard to say we are friends. We are friends but remember we are friends because you made us a colony years ago…It was not a friendship agreed-upon, mutually satisfying… It was a friendship imposed on us,” Duterte said in Davao City after reading out a letter he received from Secretary of State Mike Pompeo, Defense Secretary James Mattis, and Commerce Secretary Wilbur Ross.
In the letter, the US top officials praised the “enduring partnership built on shared history and values” and urged a meeting with the Philippines leader to convince him to buy American defense equipment. In particular, they brought up the potential sale of F-16s and helicopters, which the US officials believe the Philippines army desperately needs.
Duterte, however, slammed US bureaucrats for “dangling” their “advanced” military technology which has no use for his country. “What I need are just propeller-driven planes for anti-insurgency. We don’t have any other enemies – NPA, ISIS, Abu Sayyaf. We don’t need F16 and yet they dangle [it] before us after they insulted us,” he said.
Noting that the US often supplies refurbished, used and written-off arms to their “partners,” Duterte recalled how they once sold Manila a batch of six helicopters, three of which crashed and killed soldiers. “We bought six helicopters. They said they’re refurbished, they were used by NATO. Apparently, they were overused,” the Philippine president said. “Three of the helicopters crashed, killing all my soldiers…now you are talking about procurement.”
“Prove to me first that you are in utter good faith,” Duterte added, noting, however, that hardly any guarantees would be good enough when US lawmakers can block arms supplies whenever they please. “I would like to remind America all of them…how sure (are they) that I will be able to get what I bought?”
The president agreed to meet the trio, but refused to travel to the US, stressing there “will never be a time I would go to America.” But any talks, Duterte said, would only be possible when Washington returns three Balangiga bells, taken by the US Army as war trophies following the Balangiga massacre in 1901, during the Philippine-American War (1899-1902). After Spain ceded its longstanding colony in the Philippines to the United States, Washington only granted independence to Manila in 1946, following World War II. This month US lawmakers reportedly assured the Asian country that the bells will be returned.

“If the Balangiga bells are not returned, we don’t have anything to talk about,” Duterte said, stressing that the memory of the bells “still haunts everybody here because it was taken with blood and lives.”
Washington’s refusal to sell assault rifles to Manila, under the pretext of concerns about the country’s human rights record amid its ongoing war on drugs, has forced Duterte to seek new suppliers. Manila, which has long depended on the US for weapons, turned to China and Russia to fill the gap. While both countries already supplied Manila small arms, Duterte’s government is also shopping on the market for patrol boats, helicopters, armored vehicles and even submarines.
Defense Secretary Delfin Lorenzana was reportedly in Russia this week, where he discussed the possible purchase of subs and other defense equipment. Noting that Manila is still “shopping and has yet to decide where to buy [submarines],” Lorenzana told reporters on Thursday that South Korea “is a candidate too.”
“But the Russian-made is better and more expensive,” Lorenzana said. “We are not a very rich country, we may opt for a more affordable platform. We’ll see, the jury is still out.”
The Mattis-Pompeo-Ross reconciliatory letter was sent after Assistant Secretary of Defense, Randall Schriver, carelessly warned Manila to think “very carefully” about the consequences of acquiring Russian weapons. “You’re not just buying capability, you’re investing in a relationship,” Schriver said earlier this month, triggering uproar from Duterte.