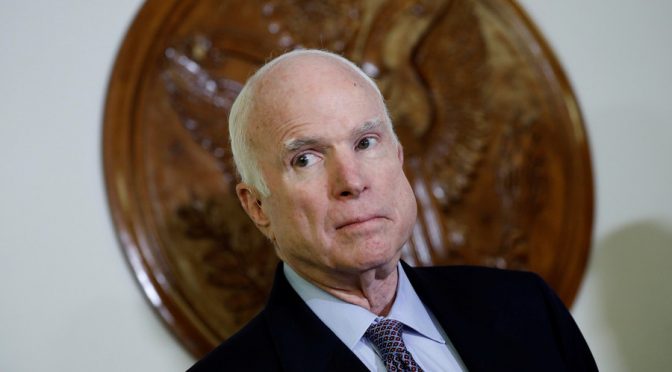 ISIS Godfather John McCain succumbed to his brain cancer few hours ago after he refused any more of those toxic chemical treatments which made his brain more toxic. In his last breath, he accused Russia of having “assaulted the foundation of democracy” aka regime change efforts everywhere.

“According to a statement from his office, Mr. McCain died at 4:28 p.m. local time. He had suffered from a malignant brain tumor, called a glioblastoma, for which he had been treated periodically with radiation and chemotherapy since its discovery in 2017.” – NYT

John McCain was one of those GI Joes who burned Vietnam in an effort to spread democracy in Southeast Asia. McCain came from a family of heroes.

“John Sidney McCain III was born on August 29, 1936, on a US Naval base in Panama, which at the time was under the control of the United States. In joining the navy, McCain followed a family tradition –both his father and grandfather were admirals– though he proved a less-than-model pupil, finishing fifth from bottom in a class of 895.
McCain went on to serve as a combat pilot in the Vietnam War, where he was captured and detained –at one point in the notorious Hoa Loa prison, nicknamed the ‘Hanoi Hilton’– as a prisoner of war. McCain endured unspeakable torture and deprivation until his release in 1973. After release, he was awarded the Silver Star, Bronze Star, Purple Heart and Distinguished Flying Cross.”
https://www.rt.com/usa/436861-senator-john-mccain-dies/

McCain leaves behind a battery of failed or tattered states, e.g. Libya, Syria, Iraq, Afghanistan, Ukraine, through his deep involvement in the Islamic State’s terror and plunder operations against those countries.

Important visit with brave fighters in #Syria who are risking their lives for freedom and need our help pic.twitter.com/tx4uX572ZP

McCain has been very loyal to the exceptionalist hegemonic ambitions of the Bush-Cheney-Clinton-Rockefeller faction within the Deep State.

George W. Bush on John McCain: "Some lives are so vivid, it is difficult to imagine them ended. Some voices are so vibrant, it is hard to think of them stilled. John McCain was a man of deep conviction and a patriot of the highest order." https://t.co/Spx9rmHGoy pic.twitter.com/7NPGdKYtAM

May the Bushes and the Clintons be the next ones to bite the dust soon.