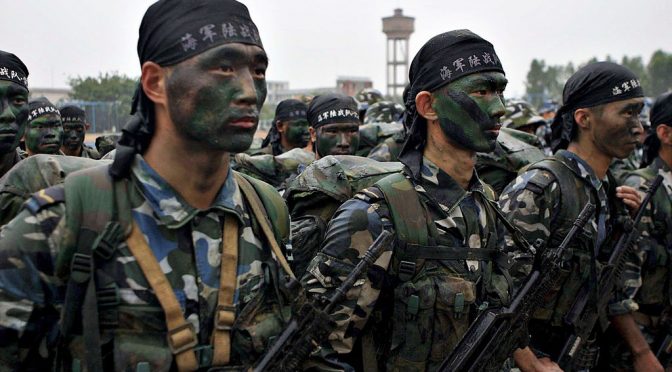 Right now, the Syrian Army is surrounding the last ISIS stronghold in Idlib province, where an estimated 100,000 militants are using trapped civilians as human shield. Some of the civilians have already escaped through the humanitarian corridor, while others are arming themselves to fight it out until the last terrorist is rooted out from Syria.
In more than one occasion, the Syrian government has allowed all defeated ISIS militants to find temporary shelter in Idlib as part of a reconciliatory effort to reduce civilian casualties. But as can be expected when dealing with foreign terrorism benefactors, only a few of the VIP terrorists were actually airlifted from the Syrian battlefield and moved into Canada and Europe.
Most of those terrorists who survived the Syrian Alliance counteroffensive are still holed up in Idlib to make their final stand. Trucks loaded with chemical warfare were seen entering into the last ISIS stronghold, which prompted Russian to send its largest armada ever deployed in Syrian waters.

The Russian military has received information from several sources in Idlib Province that “a large supply of poisonous agents has been brought to the city of Saraqib on two trucks from the village of Afs,” Major-General Aleksey Tsygankov, head of the Russian Center for Reconciliation of the opposing sides in Syria, said in a statement.
The chemicals were delivered to an arms depot, used by the militant group Ahrar al-Sham, “accompanied by the eight members of the White Helmets organization,” Tsygankov said, adding that the cargo was met by two high-ranked Ahrar al-Sham commanders.
“Later, a part of the load was put in unmarked plastic barrels and transported to another militant base in the southern Idlib in order to stage the use of chemical weapons and subsequently blame the government forces of employing poisonous substances against civilians,” the statement read.
https://www.rt.com/news/437091-militants-syria-chemical-weapons-provocation/

The only question now is, where should these terror-hardened 100,000 ISIS militants go after they are defeated in Syria?
According to high ranking intelligence sources, the Americans, Turks and Saudis are actually making plans to redeploy the surviving terrorists to Central Asia and the Xinjiang province in China.

“It is estimated that there are 100,000 terrorists in #Idlib…I have been told by some high-ranking sources that the Americans, Turks and Saudis are making plans to redeploy the terrorists to Central Asia and the Xinjiang province in China.” https://t.co/HyOmbXpNNZ pic.twitter.com/S8gyOCWaH1

It is for this reason that the Chinese military is also sending military personnel assistance to the Assad government and augment the Russian, Iranian and Hezbollah forces that are already on the ground.

This may be the first overt entry of the Chinese military in the Syrian theater, but it has already sent its special forces last year specifically to suppress an estimated 2,500 Islamic East Turkistan Movement militants operating in Syria.
Most recently, China is also establishing military bases in Afghanistan to protect its mining interests in the country. Afghanistan is home to a large deposit of rare earth metals that the Chinese electronics, optics, and military arms industry badly needed, and for which the Western Deep State is actually rooting for beyond opium. That’s the primordial reason why they simply cannot leave the Afghans on their own.

13 thoughts on “Final Showdown: Retaking Idlib from ISIS May Involve Chinese Military, too”