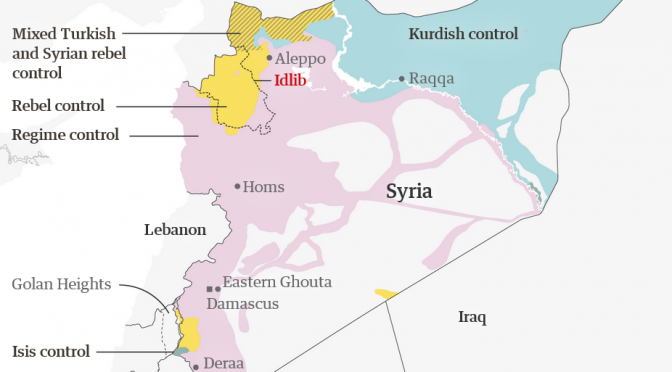 The Russian Aviation has initiated the battle to recover Idlib province in Syria from CIA-MOSSAD trained terrorist groups with a big bang., as key terrorist installations were reduced to smithereens when Russian missiles hit them with pinpoint accuracy.

This should decapitate the ISIS mercenaries before the combined Syrian, Russian, Iranian and Chinese ground forces start to engage the former in an unconventional battle of their lives. What complicates this operation is the trapped civilians numbering at 2 million, and the two-faced participation of Turkey along its border with Syria.

BEIRUT, LEBANON (4:00 P.M.) – The Russian Air Force has stepped up their aerial assault in the Idlib Governorate this afternoon, following a series of powerful airstrikes earlier today.
Using their Sukhoi jets, the Russian Air Force has launched another another two dozen airstrikes over the southwestern countryside of the Idlib Governorate, a military source told Al-Masdar News.
The Russian jets primarily concentrated these strikes on the Jisr Al-Shughour District, which is controlled by the jihadist rebels of Hay’at Tahrir Al-Sham and the Turkestan Islamic Party.
With these latest airstrikes, the Russian Air Force has now launched over 70 airstrikes above the Idlib Governorate today.
This latest campaign by the Syrian and Russian air forces is the largest aerial bombardment of any part of Syria this year.
While the Russian Air Force continues to bombardment the jihadist rebels, the Turkish military has responded by increasing the size of their forces around the Idlib and Hama governorates.
It appears that a major showdown might take place between the Syrian Arab Army and Turkish military, if the latter does not withdraw from certain observation posts near the jihadist rebels.
https://21stcenturywire.com/2018/09/04/russian-air-force-relentless-in-first-day-of-major-airstrikes-over-idlib/

It’s the presence of the civilians that the Western media is capitalizing on in their criticism against the planned, and now being executed operation.

Two million Syrian civilians are trapped in Idlib province between advancing Syrian regime forces and opposition fighters, including hardline jihadist groups.
But unlike in previous years, the border with neighbouring Turkey is now closed and civilians have nowhere to go as the fighting and the bombing intensifies.
“What’s happening out of Idlib in the north-western area of Syria is an absolute outrage,” Jan Egeland, United Nations Syria special adviser and secretary general of the Norwegian Refugee Council told 7.30.
“It’s a war against civilians, they are caught in crossfire.
“They are caught in continuous air raids, hospitals are being hit, refugees are being hit, people who have fled from war are being hit.”
http://www.abc.net.au/news/2018-02-08/syria-idlib-air-strikes-described-as-a-war-against-civilians/9408578

Earlier on, we have received reports that the civilians in Idlib are actually arming themselves to fight it out alongside government forces to finally end the ISIS scourge, as inspired by the people in Ghouta.
It is also worthy of note that Israel is always ready to turn its back from its own mercenaries where it can, except ISIS leadership. The pawns of the game are always dispensable after the goal has been achieved. To illustrate, in the case of the Marawi Siege, Israel surveillance and intelligence capabilities were used and acknowledged by the visiting Philippine president Duterte to Netanyahu.
In short, it would be acceptable to Israel that its leaderless ISIS  terrorists now [US Air Force have already airlifted the ISIS leadership weeks ago] be decimated now if unsuccessful in its operation reassign them to the borders of China.
The Syrian War may be ending and the Western aggressors completely lost on this one, but the damage has been so great not only in Syria, but also on the European population who need to endure the flood of undocumented refugees from other cultures.
That’s the minimum objective of any war prior to this one, and those who instigated them all are still very much amused of their accomplishments.

The reactive measures taken by governments only further the corporate clout on the already fascist character of the police enforcement and the intelligence community.
Social engineering via multifaceted distractions takes time to unravel, but forced migration and accelerated integration always breed internal conflicts that sustain corrupt governments.
Meanwhile, the biggest military exercise in history is being conducted between China and Russian military organizations, to send a message of deterrence to the other side of the ongoing global conflict.