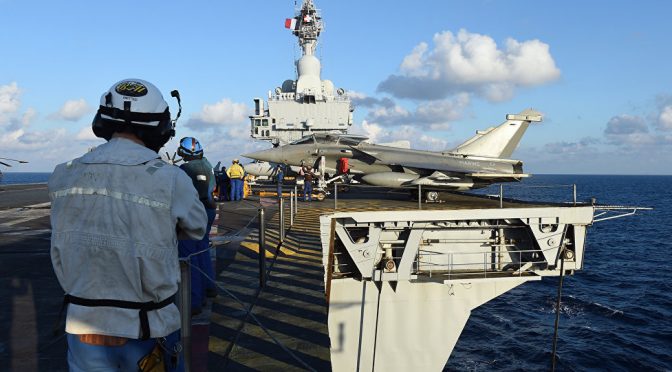 Update: Russia blamed Israel for creating the situation for Syrian Air Defense to shoot down Russian plane with 14 personnel on board. Israel deliberately delayed its notification about its impending operation against Syria.
Russia said that an Israeli war plane was flying in close proximity to its own plane, and as a result the Syrian defense system was unable to see the incoming Russian plane, triggering Syria instead to take defensive measures with an older Russian made S-200 air defense system.
This is the type of a situation that’s been waiting to happen, as the Russians are too lenient about Israeli operations inside Syrian airspace.

Israel had notified Russia about its operation in Syria via hotline a minute before the strike, which did not allow enough time for the Il-20 aircraft to make it to the safe zone, the Russian Defense Ministry stated.
Israel’s Embassy in Moscow has refused to comment on Russian Military’s statement on Il-20 crash.
“We deny any involvement,” spokesman for the French military Colonel Patrik Steiger said responding to the accusations.

Russia is now reserving the right to take appropriate, adequate actions against Israel for using its plane as cover that resulted to Russian casualties. No comment was made yet from the Israeli ambassador to Russia.
Original article:
Just five days ago, French Ambassador to Russia Sylvie Bermann told reporters about the possibility to further develop economic cooperation with Russia, and yet, just a few hours ago, the Russian Defense Ministry reported that it has detected missile launches from a French frigate, and that a Russian Il-20 aircraft went off radar near Hmeymim airbase in Syria. The plane carried 14 servicemen; their fate is unknown.
“On September 17, at about 11 p.m. Moscow time [20:00 GMT], the communication with the crew of the Russian Il-20 aircraft was lost when it was over the Mediterranean Sea, some 35 kilometers from the Syrian coast, on its way back to Hmeymim airbase,” the report said.
Latakia came under fire earlier today in a missile attack military sources said come from the direction of the sea. The Russian Defense Ministry in its statement about the missing plane identified four Israeli F-16 airplanes as part of the attack on Latakia. Personnel at Hmeymim airbase have organized a search and rescue operation.
Israeli Defense Forces spokesperson refused to comment on the plane disappearance. After taking a break for a consultation with the command, the spokesperson said that IDF doesn’t comment on reports from abroad.
Earlier on Monday, Syrian media reported a missile attack on the Syrian city of Latakia. A source told Sputnik that there were drones and missiles involved in the attack. Another source from Syrian military said that the missile attack on the coastal city was made from the sea.

Video from the aggression on #Latakia pic.twitter.com/OIgUVbdbVP

Syrian air defenses have engaged missiles targeting the area of Latakia, a city in the coastal province that is the home of Russia’s Khmeimim Air Base. Seven people were reportedly injured in the attack.
According to the state SANA news agency, the attack targeted the Technical Industries Agency headquarters in Latakia, owned by the Syrian military. Reports from the area refer to “powerful explosions” heard in the city. According to Syrian military sources, the strikes also targeted a power station and an aluminum factory.

Earlier in the day, Russia and Turkey reached an agreement over a partial demilitarization of the Idlib province, which is the last remaining stronghold of anti-government insurgency and al-Qaeda-linked terror groups in Syria.
On Monday evening, local media reported a missile attack by an unknown force on Syria’s coastal city of Latakia. A source told Sputnik that there were drones and missiles involved. Another source from Syrian military said that the missile attack on Latakia was made from the sea.

We are now in the last stages of the global operations against the Nazionist Khazarians hell bent on establishing a dictatorial global government that will enslave everyone through an AI-based control system.
The return to gold and sovereign asset-based currency, the establishment of an alternative to the Western-controlled SWIFT banking exchange system, and the earlier opening of the Shanghai Oil Futures Exchange, and the systematic exposure of the Vatican Pedophiles are just some of the measures taken against the Khazarian Criminal Cabal.
While there are concerns about China implementing the same AI-based social credit system, the jury is still out on that one because contrary to the Western cabal which has criminal interests to protect, China is not known of harboring criminals. In fact, it is the latter, together with Iran, that is known to have sent erring bankers to the gallows.
The combined Russian-Iran-Chinese-Syrian counterterrorism operation to free the last CIA/ISIS stronghold Idlib province will finally end the Greater Israel plan to subjugate the Lebanon, Syria and parts of Egypt in order to wrestle control of the huge natural gas reserves, i.e., 122 trillion cubic feet recoverable gas, in the Levantine Basin.

So, there’s real hope for mankind still, and all those who said otherwise are just serving us with evil intent. Remember, the enemy will only succeed if we do nothing.
Do something.

3 thoughts on “France just initiated War with Russia in Syria”