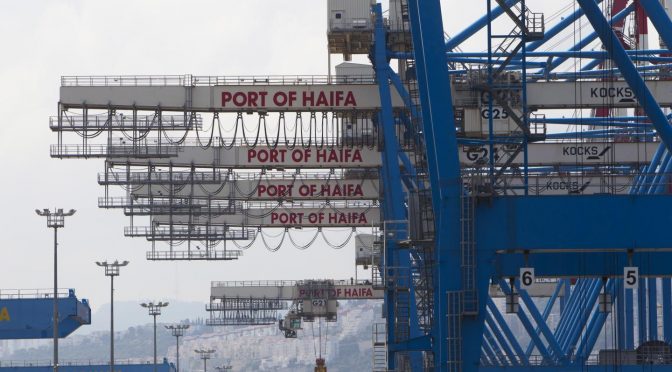 Even when China’s Belt and Road Initiative has been discussed widely in mainstream media nowadays, still this news has sent shockwaves across continents. The port of Haifa will be under the full control of a Chinese company from 2021 through 2046.
Some consider this as proof that China is actually under the Rothschild dynasty’s control, as the State of Israel is.
Superimposing this possibility in the recent incident involving four Israeli fighter jets using the Russian Ilyushin IL-20 recon plane as a cover that would then receive Syrian air defense’s timely respond that resulted in the deaths of 15 Russian personnel on-board from the same Russian made S-200 missiles being used by Syrians, only suggest that Russia and its allies on one hand, and US-UK-France on the other, are just using Syria as a playground, i.e. a theater of simulated war,  for advancing their respective interests.
Remember, every state needs to create and sustain the perceived rationale for their own existence. When every individual has the capacity and enough resources to be self-reliant, governments will no longer have reasons to exist. So, we need to have conflicts from time to time so that government must be there to “protect us from that possibility of having to deal with external threats.”
Having said that, it is equally true that Western economies are experiencing a financial meltdown, although most of the population there has not realized it yet, and China’s entry into their respective economies are being welcomed by their respective governments, US-dependent Israel included, even when some quarters are raising security concerns. Still, the question must be asked, why this is happening at all in the most highly priced territory of the Vatican?

Chinese company is planning to take over management of Israel’s Haifa port as Beijing continues to advance its global influence in the form of economic projects and big commercial deals.
The Haifa port sits close to the hub of the Israeli navy base that is reportedly home to the country’s nuclear-capable submarine force, according to The Times of Israel. Israeli critics are calling for an investigation into potential security issues posed by the Chinese presence along the country’s Mediterranean coast.
At the University of Haifa’s Workshop on Future of Maritime Security in the Eastern Mediterranean conference at the end of August, Shaul Chorev, reservist brigadier general of the Israel Defense Forces (IDF), former navy chief of staff, and chairman of the Atomic Energy Commission, said a new mechanism was required to keep an eye on Chinese investments in Israel.
According to a summary document of the meeting, sent to Newsweek by Chorev, one of the key concerns among those present was that the Chinese Haifa contract could “limit or preclude” regional cooperation with the U.S. Navy, which has become ever more valuable due to political developments in the Middle East.
The Shanghai International Port Group’s management of the newly expanded Haifa port is due to be inaugurated in 2021, noted Ynet, and the contract will run for 25 years. Another Chinese firm won a contract to build a new port in the southern Israeli city of Ashdod, reported Haaretz.
But, as the August conference noted, this project also has political and military dimensions. Chorev and his colleagues warned that Israel lacked a process to analyze economic investments for its national security implications, and must rapidly develop one.
China has been hard at work creating a network of infrastructure to extend its economic reach around the globe. Its mammoth Belt and Road Initiative hopes to establish a 21st-century Silk Road by 2049. Beijing will invest as much as $8 trillion in the undertaking, said the Center for Strategic and International studies.
https://www.newsweek.com/chinese-deal-take-over-key-israeli-port-may-threaten-us-naval-operations-1121780

Who can refuse part of that $8 trillion blood infusion to one’s economy right now?
Just to provide enough context, this development did not happen overnight. In 2016, The Institute for National Security Studies of Tel Aviv University reported in 2016 that:

In the past few years, Israel granted two Chinese firms major concessions in its two principal ports on the Mediterranean cost – Haifa and Ashdod. These add to a growing Chinese maritime presence in the East Mediterranean, Egypt, Greece, and Turkey, in what seems to be a move to facilitate China’s growing trade with Europe. The question arises whether the Chinese enterprise is motivated purely by economic reasoning. Or, might there be long term strategic thinking behind these efforts? This article surveys China’s maritime expansion in the region and questions whether Israel has given sufficient thought to strategic considerations beyond the economic benefits.
https://www.newsweek.com/chinese-deal-take-over-key-israeli-port-may-threaten-us-naval-operations-1121780

This should give the Chinese government a considerable control over the economic trajectory of the Rothschild territory, and may provide a huge leverage on the impending establishment of a two-state compromise between the Khazarian Jews and Palestinians.
Early on, we have laid out the supposed plan of the Eastern Alliance to establish a multipolar world to counter the hegemon that’s been perpetrating endless wars of plunder across the Eurasian continent. Incorporating Israel’s Haifa Port into the Belt and Road economic network could be part of the compromise that needs to be done so that Israel is assured of survival once the Deep State is finally removed from power.
That’s the only explanation why the US presence in Israel must be set aside.

President Xi Jinping has been vocal in his push for what he called the “military civilian integration policy,’ by which the leader intends to combine “the ideas, decisions and plans of military and civilian integration” in “all fields of national economic development and defense building.”
In that light, the commercial contract for the Haifa port would theoretically give the Chinese military a usable facility in the Mediterranean along one of the world’s most vital trade arteries.
The deal could affect the relationship between the U.S. and the IDF. Retired Admiral Gary Roughead, the former chief of naval operations, said he was in favor of increased Israeli-U.S. cooperation generally, but a Chinese-run port in Haifa meant American ships could not regularly use the Israeli naval base nearby.
According to the summary provided by Chorev, Roughead explained, “The Chinese port operators will be able to monitor closely U.S. ship movements, be aware of maintenance activity and could have access to equipment moving to and from repair sites and interact freely with our crews over protracted periods.
“Significantly, the information systems and new infrastructure integral to the ports and the likelihood of information and electronic surveillance systems jeopardize U.S. information and cybersecurity,” he continued. “These factors might not preclude brief port visits, but it would preclude homeporting and other protracted projects and initiatives.”
The U.S. Navy has been gradually pivoting, noted Taylor & Francis, from the European theater and Middle East to the Persian Gulf and Asia, particularly because of the challenge posed by an increasingly powerful China. Europe is no longer the ultimate focus of American foreign policy.
https://www.newsweek.com/chinese-deal-take-over-key-israeli-port-may-threaten-us-naval-operations-1121780

This also indicates the waning power of the Deep State in the realm of military and finance. Remember, it used to be an exclusive topic of a few alternative sites, but the highly coordinated dollar dumping is now undeniable. Even Newsweek above has been very silent about the ongoing anti-Deep State financial attack until today when clearly. allowing China’s encroachment is the only option left.
The great irony here is that therre’s a report that it would be Israel that would provide the escape route for the defeated ISIS militants in Syria, and where should they’d be sent?
To Xinjang Province border of China where Uyghur militants are already holding up.
In short, the impending final showdown in Idlib will provide the Chinese the great opportunity to slaughter the armed pawns in the game, while the West and Israel can start forgetting them, because all of this planned escape route will be just for the latter’s comfort.