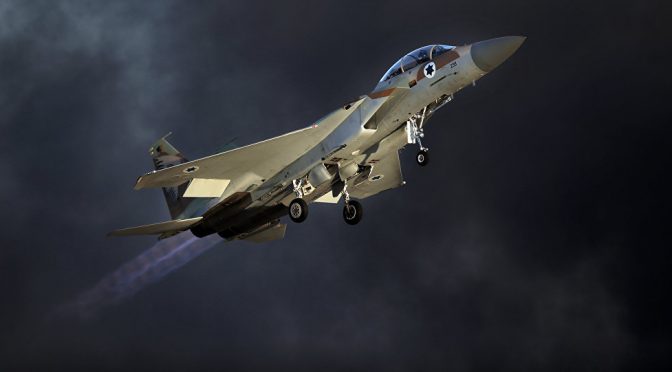 Russia was shocked at the boldness of Israel’s latest aerial acrobatics that resulted in the downing of one Russian reconnaissance plane by its own manufactured S-200 missile over Latakia, Syria, which ran counter to the statement made by the Russian Ministry of Defense.
It is notable that right after the event, which led to the death of 15 Russian servicemen, Putin was shown to be testing the latest sniper rifle as if to send the message that all is not well between Israel and Russia when Russian lives are wasted.

So, it’s still too early to conclude that Putin has folded to the Dark Side. This ongoing move to put the Khazars in their rightful place has been consistently gaining a lot of traction, and raising the white flag for just a single event that exposes the deceptive mindset of the Khazarian Jews.
According to Konashenkov, the Israeli Air Force provided Russia with misleading information on the location of its airstrikes on targets in Syria, which prevented the commander of the Il-20 plane from relocating to a safe zone that led to its destruction.

“During the negotiations via the deconfliction channel, the representative of the Israeli Air Force Command reported that the targets assigned to the Israeli aircraft are located in Northern Syria … As you can see on the map, the Israeli jets delivered strikes in Latakia which is a western province of the country — and not in the north of the Syrian Arab Republic. The city of Latakia is located on the western coast. The misleading information provided by the Israeli officer about the area of strikes did not allow the Russian Il-20 airplane to move timely to a safe area,” Konashenkov said.
https://sputniknews.com/world/201809231068261218-russia-israel-il20/

Russia now has the moral authority to fully repel any Israel presence near Syrian airspace to protect its own troops and military bases.
It is also much clearer at this point that Trump’s role in the whole ball game is to manage the systematic descent of the financial system of the Deep State and provide a soft landing for the US population. Every Trumpian economic rhetoric is met with substantial anti-Deep State countersanctions from the Alliance.

The global effort to dump the Rothschild dynasty’s fiat US dollar is being accelerated as of late, and obviously for countless of justifications. It has not reformed itself in spite of the losses it had incurred so far. The reforms at the Vatican bank is merely optical, and the planned debt jubilee has not been implemented yet.
The Vatican instead aims to penetrate China through its churches, and for some reasons China is acceding to this Jesuit offensive nonetheless. Haven’t they learned anything at all from Jesuit Mao’s genocidal extermination of 30 million Chinese early in the 20th century?
It is worth of note that the EU Parliament continues to deny British people  an orderly Brexit.

Undoubtedly the EU bosses bullied and humiliated Theresa May and the UK yesterday but don’t waste your sympathy on Theresa the Appeaser instead spare a thought for your country, fellow citizens and our forefathers who laid down their lives to save Europe from this tyranny over 70 years ago. We, along with our allies in the USA, saved Europe from becoming an undemocratic, all powerful, megalomaniac run Empire. But what have we got now?
Those men and women were promised a land fit for heroes and what have we got? A European super state without the Germans even having to get the Tanks out of cold storage.
We wanted a common market not the United States of Europe. This is why we voted Brexit. We want to control our borders and make our own laws and regain our sovereignty.
The clear facts are that the Godfathers of the EU are determined to deny us that and people like Theresa May have been acting almost in collusion with them as she never really wanted to leave. The Chequers deal was a remain document in all but name and a clear betrayal of what the British people voted for two years ago.
https://sputniknews.com/columnists/201809211068228670-eu-summit-salzburg-uk/

This is just one of many covert reasons why Israel is taking suicidal missions to drive a wedge against Syria and its allies, to deter Russia and Iran from winning the Syrian war. Establishing the Greater Israel Yinon Plan was their last hope to survive the great awakening of the Goyims.
While the military aspect of the ongoing offensive against the Deep State is being spearheaded by Russia, China is doing its damage to the financial system of the British Empire, as it is now selling US debt right after it abstains from its participation in the trade talks with the US, and is sending ground Special Forces in Idlib.

Where we are today is the result of our collective decision on the way to 2012, when we chose global peace and enlightenment over the end of mankind.
The Alliance could have responded heavily on the multiple attacks against them by the Deep State, e.g. Fukushima Tsunami, Tianjin Nuclear Blast, but the former choose to use soft power to convince the other side that in a multipolar world, the Deep State will remain relevant for as long as reforms are made to rid itself of destructive elements within its organization.
They just poked at Iran during a military parade when its terrorist pawns clad in military uniform fired at civilians so that the Iranians will hate their own government. This is not expected to work considering the level of awareness in the country about how the CIA interfered in their own internal affairs.
When Putin announced about Russia’s upgraded military capability last March 1, it was meant as a warning that the federation is ready to take it to the next level whenever necessary. Israel’s provocation, which manifests the Deep State’s true intention of pursuing violence and conflict wherever desirable, therefore, will be responded to accordingly, and Putin is not known to act hastily. This should explain why he is keeping his cool in the interim.
There will be proper and adequate preparations before Israel will be put in its place with Putin saying these will be “the steps that everyone will notice.” We understand this to mean the reinstallation of S-300 ground to air missile system, and the subsequent establishment of a no-fly zone for Israel near Syrian airspace.
As of now, the Syrian Arab Army is encircling the terrorists’ last stronghold in Idlib without any access to water. It is only a matter of time before the pawns raise the white flag of final surrender in Syria.
The only question that remains is where will this battle hardened terrorists go if not Westward, where they’ll be recycled to keep the population preoccupied with fear?

20 thoughts on “Alliance Tightening Noose on the Deep State”