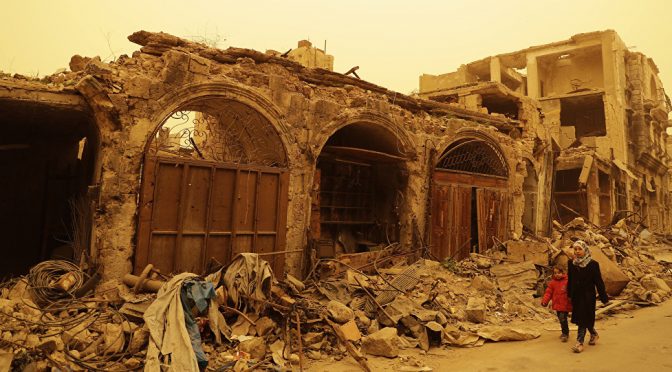 On September 21st, the Russian Minister of Trade and Industry Denis Manturov announced the country’s plans to start production of construction materials and cars in Syria, which are to be exported to third countries.
As cited by TASS during a press conference following the meeting of the Russian-Chinese subcommittee for cooperation in the field of industry, Manturov said that the countries are currently discussing the option of Russian production of construction materials and cars in Syria.
“We have been cooperating with Syria for a long time to supply road construction equipment, construction materials, and to organize the production there,” Manturov said.
The Trade and Industry Minister did not specify what companies will be established, who will be their key participants, under what brand will the products be produced. He did, however, confirm that it will be within the transport and energy construction industry, as well as the automotive one.
“What will come first, in view of restoration will be construction materials. The organization of production there is for the production of construction materials, which are to be used in the local market,” according to Manturov, as cited by RIA Novosti.
Manturov also expressed hope that the construction materials may be delivered beyond the Syrian market, to other countries in the region.
“If these products are to be competitive, they will have to be delivered to neighboring countries from the Syrian establishment,” the Minister said.
Russia is already looking into building its own production bases in Syria. In February, the vice-president of the Chamber of Commerce and Industry, Vladimir Padalko, claimed that Russian companies are discussing projects for the construction of cars and agricultural machinery in Syria.
He also specified that large automotive manufacturers will most likely not enter the country, their dealers will. He also announced that one Russian company has initiated negotiations for the construction of more than a dozen establishments for the production of reinforced concrete products.
Belarus has also announced plans to establish a car manufacturing base in Syria. Mid-January 2018, representatives of the Belarusian company MAZ held the relevant negotiations in the Syrian Ministry of Industry.
In addition to announcement regarding Syria, Manturov also spoke about the development of industry in Russia and China. According to him, Russian and Chinese industrial progress and cooperation draw dissatisfaction from the Western Countries.
“You can see for yourself the difficult geopolitical and economic situation in which our countries are. It is chiefly due to the fact that we produce large volumes of competitive products – it concerns iron and steel industry and nonferrous industry, in particular aluminum,” Manturov said at the press conference.
“The stronger the Chinese and Russian industries become, the more dissatisfaction it draws from our Western colleagues, in particular the US,” he stated.
“However, it only motivates us all the more to cooperate in the areas we discussed today. These are, in particular, metallurgy industry, aluminum, radio-electronic industry, pharmaceutics, automobile industry and new groundbreaking spheres,” Manturov reported.
“Pressure, sanctions and certain bans by the Western countries and the US push us once again toward cooperation and a search for joint solutions and products,” the Russian industry and trade minister concluded.
The announcement of industrial establishments in Syria follows the announcement of Russia’s Export Development Plan on September 12th. Denis Manturov said that the plan envisioned the launching of 4 industrial zones abroad, all of which are to be operational within 6 years.
This is in addition to the one already functioning in Egypt.
“We are developing a program for the creation of industrial zones abroad. We should establish at least four zones in six years. We have one in Egypt, and we must form them in Latin America too – it could be Mexico, Uruguay or Paraguay, in Southeast Asia – Vietnam, Malaysia or Indonesia – and in eastern or western Africa. We will analyze where it will be advantageous,” the minister said.