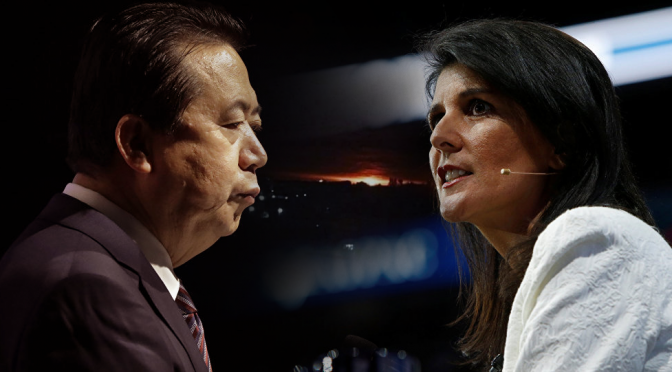 Recent anti-Deep State measures are too hard to ignore. In a follow-up to the installation of S-300 SAM system to tame Israel in Syria, a massive explosion rocked Ukraine two nights ago. This is a message to the West that the ongoing US-NATO-Ukraine joint military exercise is highly provocative to the Russians.
“Up to three blasts per second rocked a munitions depot near the city of Chernigov in northern Ukraine. More than 10,000 people were evacuated from the area, which was put on lockdown for air and land travel.
The first reports of explosions at the arsenal in the town of Ichnia came in at about 3.30am. Five depots of the arsenal were still engulfed by the inferno in the afternoon.
The powerful blasts smashed doors and windows in nearby areas, according to locals’ comments on social media. Terrified people have been posting images of the night sky lit up by the apparent explosions.”

Any radar transmitter capable of sending high powered microwave frequencies could easily heat up the ammunition depot to initiate an explosion.
Prior to the Ukrainian arms and ammunition depot explosion, China has arrested the Chinese national Interpol Chief Meng Hongwei as soon as he landed in the country for various crimes and bribery charges. We suspect that this has to do with possible intelligence leaks while he was headquartered in Lyon, France.


“… French media reported that the Interpol president, Meng Hongwei, has been missing since he traveled to China in late September. Meng’s wife, who resides in France’s Lyon, the same city where Interpol is headquartered, reported to the police her husband missing on Friday, having not heard from him since 25 September when he traveled from France to his native China.
Chinese media said later that Meng, who also serves as the Chinese deputy public security minister, was taken for interrogation soon after landing in China a week ago.
Meng assumed office in November 2016. He has held various positions within China’s Ministry of Public Security in his decades-long career. According to Interpol’s website, Meng Hongwei served as Vice Minister of Public Security in China.”

On the other hand, Donald Trump has finally kicked out the abrasive US Ambassador to UN Nikki Haley, and the mainstream media is bitter:

President Trump praised outgoing U.N. ambassador Nikki Haley for doing “an incredible job,” when he announced her upcoming resignation at the end of the year.
President Trump and Haley held a quickly arranged media availability Tuesday morning in the White House, shortly after Axios’s Jonathan Swan broke the news of her impending exit. Haley said her resignation was simply about needing a break after six years as South Carolina governor and two at the United Nations, and Trump said Haley even previewed a desire to leave as long as six months ago.
The two were obviously eager to downplay the idea that this was hasty. But if it wasn’t, that might make the timing even odder.
If this was long planned, it was apparently one of the best-kept secrets in a very leaky White House. The news reportedly blindsided those in the foreign policy establishment, the White House and even members of Haley’s staff.
Update: Haley’s resignation letter is dated Oct. 3, which would put it before the above allegations became public. The White House hasn’t always been totally accurate with its dates, it bears noting, but that date does coincide with when Haley met with Trump in-person. It was also a day after Trump mocked Christine Blasey Ford at a rally, though there’s no indication this had anything to do with Haley’s departure.

While it’s too early to celebrate whether Haleys’ exit leads to a better UN, the Alliance continues to unload its dollar dominated bonds, and Idlib operations are proceeding as planned with the least civilian casualties.
The US-Saudi alliance is also breaking up due to rising oil prices, while White House battles it out with the Deep State with more revelations, i.e:

We learned from The Hill’s John Solomon that prior to a spy warrant being issued that targeted the Trump campaign, a top Federal Bureau of Investigation official met with Democratic National Committee lawyers. The point is, and what some have already alleged, is that the FBI knew that the so-called Trump dossier was still largely unverified, but it was still used to secure a FISA warrant against former foreign policy adviser Carter Page.
The attorneys in question were part of Perkins Coie, a Democratic law firm the Hillary Clinton campaign used to solicit the services of Fusion GPS, who then hired former British spook Christopher Steele to compile dirt on Trump:
Congressional investigators have confirmed that a top FBI official met with Democratic Party lawyers to talk about allegations of Donald Trump-Russia collusion weeks before the 2016 election, and before the bureau secured a search warrant targeting Trump’s campaign.
Former FBI general counsel James Baker met during the 2016 season with at least one attorney from Perkins Coie, the Democratic National Committee’s private law firm.
That’s the firm used by the DNC and Hillary Clinton’s campaign to secretly pay research firm Fusion GPS and Christopher Steele, a former British intelligence operative, to compile a dossier of uncorroborated raw intelligence alleging Trump and Moscow were colluding to hijack the presidential election.
The dossier, though mostly unverified, was then used by the FBI as the main evidence seeking a Foreign Intelligence Surveillance Act (FISA) warrant targeting the Trump campaign in the final days of the campaign.
The revelation was confirmed both in contemporaneous evidence and testimony secured by a joint investigation by Republicans on the House Judiciary and Government Oversight committees, my source tells me.
“… This is a bombshell that unequivocally shows the real collusion was between the FBI and Donald Trump’s opposition — the DNC, Hillary and a Trump-hating British intel officer — to hijack the election, rather than some conspiracy between Putin and Trump,” a knowledgeable source told me.
It’s been a roller-coaster ride for the Department of Justice and the FBI these past few months. There were credible allegations of bias emanating from within the agency, specifically from former top counterintelligence agent Peter Strzok, whose extramarital affair with lawyer Lisa Page caused much embarrassment to the bureau. They exchanged tens of thousands of texts, all anti-Trump and pro-Clinton.”  – https://townhall.com/

What is good about the US is that there’s much less interracial conflict that were actively instigated by Soros-funded groups right now than in previous administrations.

7 thoughts on “The Alliance May Have Gone Visually Ballistic Recently”