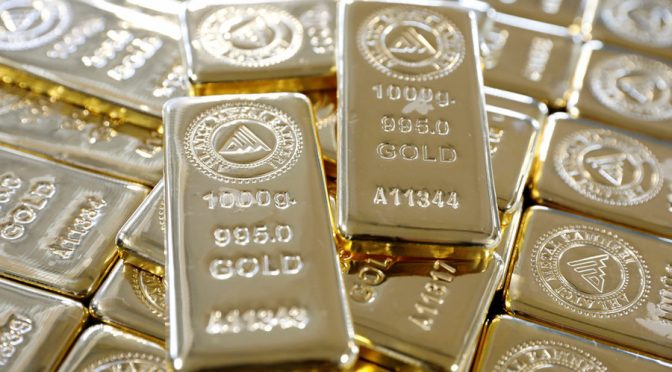 Central banks around the world are turning to gold as an alternative to the US dollar, which they see as being undermined by America’s aggressive trade policy and geopolitical uncertainty.
Demand for gold was up 42 percent year on year in the first quarter of 2018 among central banks, the World Gold Council (WGC) statistics say. Russia and Turkey are the largest net buyers.
Central banks added a net total of 193.3 tons of bullion in the half of 2018, an 8 percent increase from the 178.6 tons bought in the same period last year. This marks the strongest six months for central bank gold buying since 2015, the WGC notes.
As of the first half of 2018 central banks increased their gold holdings to $1.36 trillion, around 10 percent of global foreign exchange reserves, the WGC said. An analyst has told RT that the reason behind the move is a wish to diversify from the greenback.
“The United States has long used the dollar to put pressure on competitors. This has always caused anger in the world community. And now the fight against the dollar has reached Europe,” said Eldiyar Muratov, President at Singapore Castle Family Office.
“Russia has stepped up buying gold in its reserves in the face of new US sanctions and a possible disconnection from the dollar system,” added the analyst.
According to Muratov, a similar strategy is now being observed in many countries in Europe and Asia. China, Turkey, Venezuela, Iran, Qatar and Indonesia, are aimed at de-dollarization of economies and foreign trade. All these countries are significantly increasing their gold reserves, the expert says.
As the WGC notes in its report, gold buying is not only about hedging currency risks. “In an environment of heightened geopolitical tensions, gold is an attractive asset because it is not anyone else’s liability and does not carry any counterparty risk,” the report says.
“Gold is already a familiar asset class for central banks, but the changing nature of the gold market – with ever-growing consumption coming from developing economies – means that gold is increasingly aligned with emerging market economic patterns. Central banks may increasingly recognize that the rules of the game are changing.”

Emerging economies stockpiling gold in expectation of US dollar banking system collapse
Countries around the world are turning to gold as uncertainty about the global economy rises. Trade wars and the aggressive policies of the United States are making emerging economies withdraw from dollar assets, analysts told RT.
“In the near future we can witness a big change in the rules of the game. At the beginning of the year, developing countries were the first to feel investor panic. If a crisis in Latin America and South Asia doesn’t surprise anybody, now is the time to worry about the largest economies of the world,” Mikhail Mashchenko, an analyst at the social network for investors eToro in Russia and CIS told RT.
“The aggressive US policy in recent years has forced some countries to look for an alternative to the dollar and replenish their gold reserves. Worries about the future growth of global economy are an additional incentive for purchases. Many question Donald Trump’s protectionism,” the analyst added.
There are signs that the global financial system dominated by the US dollar could collapse, says financial institute FinIst analyst Denis Lisitsyn. These signs include the uncontrolled emission of money from different countries, an increase in US interest rates, trade wars, the rapid rise in energy prices, geopolitical tensions in Syria, Iraq, the war in Yemen, he says.
“Many countries are buying gold in advance. They understand that paper money is constantly eaten up by inflation, equities will sharply fall in price in case of a crisis, and foreign deposits can be arrested, confiscated or frozen,” he said.
Hungary, Poland, Russia, China, India, Turkey, Saudi Arabia are all hoarding gold, notes Vladimir Rozhankovsky, LIFA, expert at the International Financial Center.
“There are few alternatives to the US Treasury bonds in terms of volumes and market liquidity, but more prudent countries want to boost their reserves. Gold is, in fact, the only alternative. Even for those who do not believe in it,” he said.
Under such conditions, many central banks view gold as a traditional safe haven that allows them to ensure against possible turbulence in the markets, says Mark Goihman, leading analyst at TeleTrade. “After all, gold usually grows in price during periods of crises, and it can serve as additional support for the national currency. Many countries, in particular, China and Russia, turn to gold in opposition to dependence from the domination of the dollar. They are reducing dollar assets in their reserves,” he said.
Not only China and Russia are into gold, notes FinIst’s Lisitsyn. Germany has repatriated more than 300 tons of gold, and the Netherlands returned about 100 tons of bullion. Turkey bought 187 tons of gold last year, and has repatriated gold from the US Federal Reserve.
Iran also used gold to stabilize their economy. “Iran was forced to switch to gold payments. Weak economy and soaring inflation forced Tehran to throw gold money into the domestic market. After that, the economy stabilized, and the currency strengthened,” Lisitsyn said.
“Many neighboring countries, such as Turkey, also benefited from gold settlements with Iran. Turkey got a positive trade balance and saw the lira stabilize,” he concluded.

Interestingly, Trump has a contrasting idea about the dollar…

“I had a great meeting with Vladimir Putin, great meeting. I talked about everything, we will do great. And don’t forget — Russia wants our help economically. We have created such wealth. I have done a really good job – $11.7 trillion. Russia wants us to be involved. Everybody wants our help,” Trump said at a rally in the US state of Illinois.

19 thoughts on “Gold Demand up 42%, Countries Abandon US Dollar Amidst Geopolitical Shift”