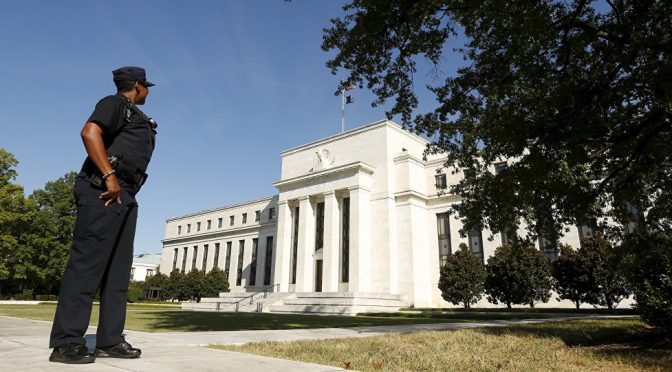 Disaster Awaits: National Debt Will Be 6 Times The Size Of The Economy
by Mac Slavo via SHTFplan.com
Even without changes to the current spending policy, the government’s spending is on an unsustainable path.

By the time a child born in 2018 reaches retirement age, the United States national debt will be six times the size of the economy according to an analysis released this week.

Without making any changes to current policy (in other words, even without the glut of new entitlement spending proposed by some of Bernie Sanders’ acolytes) that’s the trajectory for the national debt over the rest of the 21st century, according to the Congressional Budget Office (CBO), as reported by Reason. It’s an outlook that the Committee for a Responsible Federal Budget (CRFB), in an analysis released this week, calls “frightening and almost certainly unsustainable.”

The CBO’s 75-year budget forecast (its longest of long-term projections) makes it clear that the current budgetary course must change dramatically.  The United States simply cannot afford the size of government it has now, let alone the size of government demanded by socialists.  The spending must be cut, there’s no other way around it.
Unsurprisingly, spending is still the main culprit of the coming fiscal catastrophe. Driven largely by the forced Ponzi scheme of Social Security and Medicare, total government spending under the “current law” scenario will double as a share of the economy in the next 75 years. It’ll go from about 21 percent of GDP today to more than 42 percent.

“While today’s high levels of debt already threaten to slow economic growth, there is literally no precedent for deficits and debt at the levels projected over the next 75 years,” warns the CRFB.
“If policymakers don’t act to avoid such high levels of debt, a financial or inflation crisis would likely force action and severely damage the global economy in the process.”

In other words, as bad as the 75-year outlook appears, it’s actually revealing a bigger and much more immediate problem: spending way too much money.
Of course, all of this means the government is to blame for all of the financial destruction currently occurring.  They’ll also be ones to usher in the global economic crash, but will people learn? Or will they constantly go down the road of large totalitarian and unsustainable government control over vast swaths of what should be free human beings?
http://www.shtfplan.com/headline-news/disaster-awaits-national-debt-will-be-6-times-the-size-of-the-economy_10292018

5 thoughts on “Will Fed Engineer Next Crash to Topple Trump?”