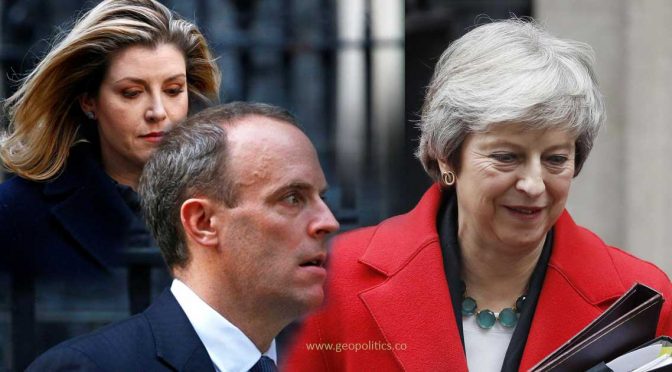 Theresa May is on the way out as her cabinet members resigned en masse. So, the Brexiteers need to wait a little longer, which is really the objective of the whole exercise. Yet, in most parts of the world, peaceful cooperation has held strong, especially between the ASEAN member-countries and China.
Russia’s Vladimir Putin also attended the recently held ASEAN Summit 2018 in Singapore, where the final negotiations for the Code of Conduct in the South China Sea were held with Philippine President Rodrigo Duterte imploring everyone, including China, for “self-restraint,” paving the way for a signed COC agreement in 2019.

This comes as trade between the two blocs stood at US$35.7 billion (S$48.7 billion) last year, an increase of 40 per cent from 2016.
The signing yesterday was witnessed by leaders after the Asean-Russia Summit.
Russia is among five member states of the EAEU, which also includes Armenia, Belarus, Kazakhstan and Kyrgyzstan.
The memorandum of understanding (MOU) signed reinforces Asean and the EAEU’s intent to cooperate in areas such as Customs procedures and trade facilitation; sanitary and phytosanitary measures; technical regulations; e-commerce; trade in services and investment; as well as business development.
At the summit, Singapore’s Prime Minister Lee Hsien Loong highlighted the widening relationship between Asean and Russia, which was formally elevated to a strategic partnership.
PM Lee noted that Asean and Russia have worked together on a broad range of areas. These include the political-security, economic and socio-cultural fronts.
Yesterday, leaders also adopted a statement on cooperation in the field of security, and in the use of information and communica-tion technologies.
“These deliverables highlight the breadth and scope of the Asean-Russia relationship,” he said.
PM Lee said Singapore supports the upgrading of the Asean-Russia relationship to a strategic partnership, and that this will enhance cooperation in areas which are of interest to both sides.
In his opening remarks, Russian President Vladimir Putin said Russia attaches importance to its ties with Asean, and told leaders he is glad these ties are growing.
In recent years, he added, both sides have managed to accomplish a lot, including boosting political dialogue and coordinating approaches to issues faced in the Asia-Pacific region.
“We believe it is important to foster a regular dialogue between Asean and the Eurasian Economic Union,” he added, noting that trade between Russia and Asean has increased in the past year by 35 per cent.
Mr Putin also said Russia is going to join Asean’s plans of establishing a network of smart cities, and invited Asean representatives to attend the St Petersburg International Economic Forum and the Eastern Economic Forum in Russia next year.
At the summit, PM Lee suggested that Asean and Russia can strengthen ties by deepening trade and investment links – an endeavour that is helped by the new MOU.
“Singapore will continue working with Russia and Asean to identify new and innovative ways to deepen and broaden our engagement,” he said.
https://www.straitstimes.com/asia/se-asia/new-mou-to-boost-asean-russia-trade-33rd-asean-summit

And while the EU is playing hardball with its UK counterparts with regards to Brexit, the former is at the same time acceding to Donald Trump’s wishes for the complete banning of Iran in the SWIFT system, as part of his effort to revisit the Iran Nuclear Accord that was facilitated by Russia, China and EU.
Trump’s Art of the Deal is also being applied to gain enough concessions in the new Russia-US START INF Treaty, as it was used in North Korea and China. All negotiations are still ongoing with no missiles up in the air, and that is all good. Right?
Here’s how the new START (Strategic Arms Reduction Treaty) and the Intermediate-Range Nuclear Forces (INF) Treaty proceed in the foreseeable future…

“MOSCOW, November 15. /TASS/. Russian President Vladimir Putin has said among the key issues on the agenda of a possible Russian-US summit will be the fate of the New START (Strategic Arms Reduction Treaty) and the Intermediate-Range Nuclear Forces (INF) Treaty and also regional issues.
“One of key issues, certainly, is strategic stability,” Putin told reporters speaking about possible topics at his meeting with US President Donald Trump at the G20 summit in Argentina in late November. “We should understand what will be with the New START and the INF Treaty, and how events will develop here,” Putin explained.
“There are other issues related to how our bilateral economic ties will develop,” Putin noted. “There are promising areas, and both the US and we are interested in fostering them.”
“And finally, the hot spots – Syria, the North Korean nuclear program and relations with Iran in the framework of the Joint Comprehensive Plan of Action (JCPOA). Both the US and Russia are involved in these issues and no doubt, we need dialogue at the highest and an expert level,” the president said.
The Russian leader said at the recent events in Paris marking the 100th anniversary of the World War I Armistice the leaders held an intense discussion during a working breakfast on the issues of global security and economy. Putin and Trump took part in it.
Preparations for meeting
Russia continues preparing for a meeting with the US president, Putin said. Meanwhile, he admitted that any unfriendly steps such as the widely expected new wave of anti-Russian sanctions slapped by the US could make adjustments to the effort. “Any unfriendly steps somehow impact the schedule of work and the schedule of meetings,” he said.
Putin noted that he has agreed with Trump to hold a meeting during the G20 summit. “In case this works out, we are ready,” he confirmed. At the meeting ahead of the press conference US Vice President Michael Pence said that the US side had been also preparing for the meeting, Putin noted. “Let’s see what comes out of this.” “We are ready to restore full-fledged work as long as the US partners are ready.”
US President Donald Trump said on October 20 that his country would quit the INF Treaty because Russia was allegedly in breach of that agreement. Russian Deputy Foreign Minister Sergey Ryabkov described this as a dangerous move. Washington was also criticized in Berlin and Beijing. In the meantime, London came out in support of the United States and NATO placed the responsibility for Trump’s decision on Russia, because in its opinion Moscow had apparently violated the treaty.
The INF Treaty was signed on December 8, 1987 and took effect on June 1, 1988. It outlawed deployed and non-deployed intermediate range (1,000-5,000 kilometers) and shorter range (500-1,000 kilometers) ground-based missiles. In recent years Washington has repeatedly alleged Russia was in breach of the agreement. Moscow emphatically dismissed the charges and countered them with its own claims over the United States’ non-compliance.
The New START Treaty, which was signed on April 8, 2010, and entered into force in 2011, stipulates that seven years after its entry into effect, each party should have no more than a total of 700 deployed intercontinental ballistic missiles (ICBM), submarine-launched ballistic missiles (SLBM) and strategic bombers, as well as no more than 1,550 warheads on deployed ICBMs, deployed SLBMs and strategic bombers, and a total of 800 deployed and non-deployed missile launchers.
The document is set to remain in effect until February 5, 2021, unless it is replaced with another agreement on nuclear arms reduction. It can also be extended for no more than five years with the consent of the parties.”

So, while the Trump government continues to engage in unorthodox ways to gain concessions in a growing multipolar world, Hillary Clinton has announced yet again to run for the same office denied her by Trump in 2016, if only to prevent possible incarceration.
Her Clinton Foundation has been persistently exposed for billions of unaccounted funds and lost charitable donations most notably those intended for the Haitians in the aftermath of the most devastating earthquake that hit the country in 2011, which resulted to the US military shut down of its main airport and the subsequent plunder of its hard assets inside the Central Bank’s vault.
Over there in the “Holy Land,” the hawkish Israel Defense Minister Avigdor Liberman resigned after a ceasefire was announced between Israel and Gaza. Israel has been put under a virtual no-fly zone with the recent Russian installation of its S-400 SAM defense system in response to the deaths of its 15 surveillance plane crew.
What is sad about all of this is that the Yemeni population are still experiencing famine, diseases and it’s all about a systematic genocidal operation using Saudi military with US-UK-France manufactured arms and ammunition. The media rarely talk about them if any. Are these people the least of our brethren?
Almost everything that the UK touches result in deaths and destruction. But they are now coming home to roost.
The bigger picture, of course, is that we are all subjected to social engineering and the root cause of all the corruption and sufferings, e.g. the monetary based economic system, is not about to be eliminated.
We can only defeat the current paradigm of subjecting even the most basic elements of survival to a mindless competition that has nothing to do with proving who’s the better asshole of us all.

Malta: when the church embraces kleptocratic culture. Parish priest standing in a convertible Porsche Boxster S being pulled through his village by children. Source and video: https://t.co/PRBaxz17HN pic.twitter.com/xjwkL74xr3

Still, the key to our individual freedom is acting and thinking like you are already free. Stop the complaining and the protesting, but do something concrete that will make things happen in your favor.

5 thoughts on “UK in Turmoil, Rest of the World Doing Just Fine”