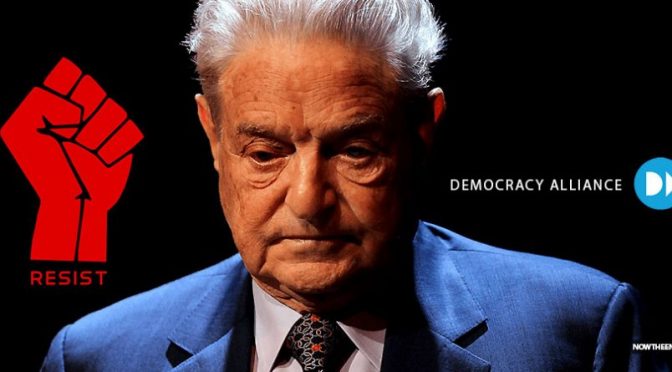 Democracy Alliance held fall investment conference blocks away from White House
A secretive dark money network comprised of powerful liberal donors who help set the Democratic agenda descended on Washington, D.C., to begin plotting strategy for the next two years leading up to the 2020 elections.
by Brent Scher and Joe Schoffstall
November 16, 2018 4:45 pm
The Democracy Alliance, a donors’ club of liberal millionaires and billionaires that counts George Soros as a member, gathered just blocks away from the White House at the Capital Hilton hotel for the group’s fall investment conference to discuss post-midterm election strategy, according to a conference agenda obtained by the Washington Free Beacon.
“Two years ago, on the day after Donald Trump’s surprise victory, we threw out the planned agenda for that year’s upcoming conference and got to work with colleagues and allies trying to understand what hit us,” the agenda reads. “Now we meet at a different moment—still with much work to do, but with the wind at our backs.”
“Everything we need to digest, review, and address cannot be covered in two days alone, which is why this conference is a starting point for the work of the next two years to build an America where everyone can participate fairly in the democratic process, that supports an economy built on inclusivity, that leads to a safe environment and healthy communities, and that is equitable and just.”
The conference—which is not publicly announced—features heavy security in the area where the donors and activists gather for their sessions, which are off-limits to anyone not involved with the group. The alliance additionally warns its members to “refrain from leaving sensitive materials in public spaces” and to dispose of all paperwork in “specifically-identified recycling bins.”
Partners of the alliance, each obligated to spend at least $200,000 a year in support of approved groups, hosted representatives from a number of liberal organizations and Democratic politicians to discuss how to expand the electorate leading up to the 2020 elections, bankrolling and assisting youth voter efforts, and pushing a more progressive agenda in Congress, among other objectives. 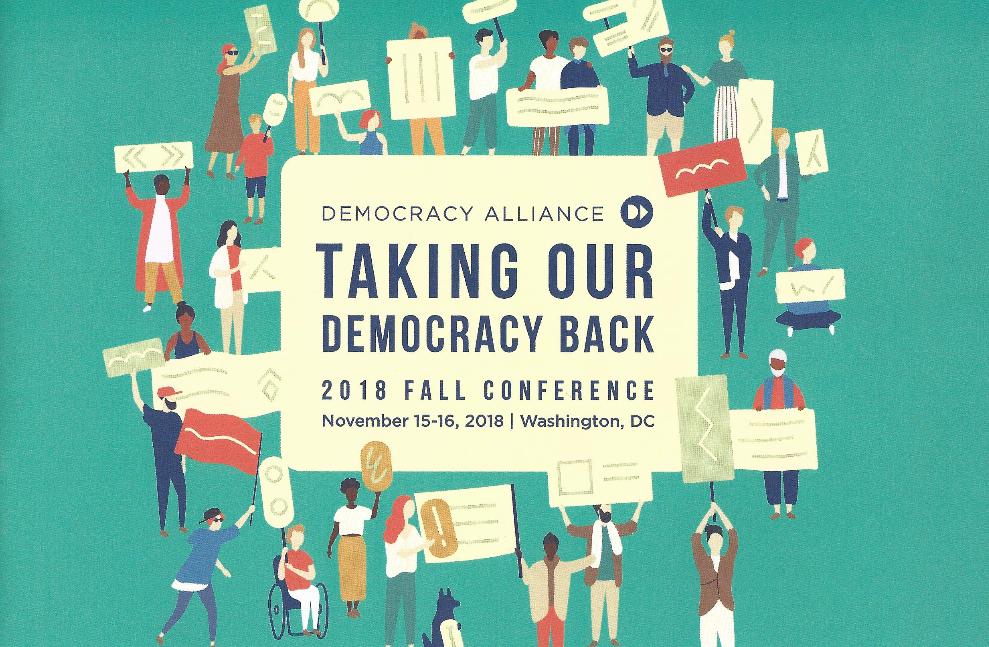 393377199-Democracy-Alliance-Full-Fall-2018-Agenda
Environmental billionaire Tom Steyer, a partner in the alliance who is leading the campaign to impeach President Donald Trump, was listed as the host of a Thursday panel where members were briefed on “how we as a donor community can support efforts to grow more permanent, stronger youth power for 2020.”
Soros’s lobbying group, the Open Society Policy Center, hosted a session called “After Kavanaugh,” where members were briefed on strategies for future judicial nomination fights.
“The fight over the Kavanaugh nomination saw unprecedented grassroots activity to defeat an unpopular and damaged nominee,” the agenda explains. “But as we now know, it was insufficient. With a 6-3 conservative majority on the Supreme Court, how should we prepare for the next vacancy, and what will be needed to bring a similar sense of urgency to the lower federal courts and the state courts?”
Rep. Adam Schiff (D., Calif.), who will soon chair the House Intelligence Committee, held a three-hour closed-door briefing with partners in the alliance on Friday morning. Rep. Pramila Jayapal (D., Wash.) took part in a session on “exercising progressive power in Congress.”
Also giving a presentation was former Virginia governor Terry McAuliffe, who argued that embracing education as a political issue could lead to “a super majority in the U.S. Senate and a Democrat in the White House.” A focus on education, the agenda explains, “is the key for progressives to carry 30 states in the next presidential election and get 60 votes in the Senate.”
“This is not a pipe dream,” the agenda declares. McAuliffe last year told the Free Beacon he was the party’s best candidate to oppose President Donald Trump in 2020.
Spotted on site were David Brock, the longtime Clinton ally who founded a constellation of liberal groups including Media Matters and American Bridge, Center for American Progress president Neera Tanden, and former Democratic congressman Tom Perriello, whose failed gubernatorial bid last year was bankrolled by Soros.
The conference’s closing dinner Friday night will be headlined by Planned Parenthood’s new president, Dr. Leana Wen.
The alliance’s fall gathering last year featured representatives Nancy Pelosi (D., Calif.), Maxine Waters (D., Calif.), and Ben Ray Lujan (D., N.M.), who chairs the Democratic Congressional Campaign Committee (DCCC). Sen. Kamala Harris (D., Calif.) introduced Soros via video message while Sen. Amy Klobuchar (D., Minn.) also pretaped a message for the group.
The agenda this year again included a warning to its members saying not to subject others to “unwanted sexual advances, coercion or bullying of a sexual nature, or the explicit or implicit promise of rewards in exchange for sexual favors” and not to engage in any behavior that is “verbally or physically unwelcome, harassing, or bullying on any basis.”
The Democracy Alliance has steered more than $500 million in funding to progressive organizations and infrastructure since its founding in 2005. Each member vows to push at least $200,000 annually to approved groups of the organization that include the likes of Media Matters for America, American Civil Liberties Union, and the Center for Popular Democracy, along with dozens of other left-wing organizations.