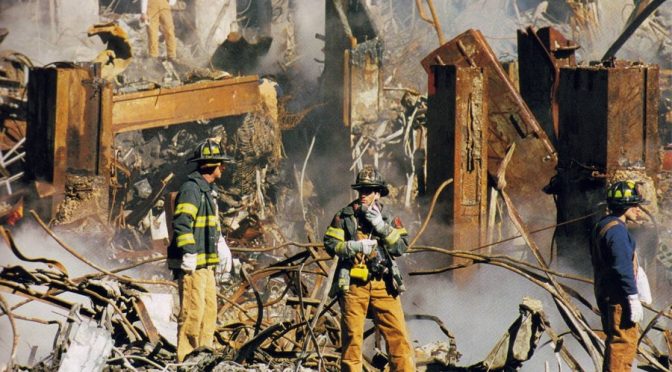 The world of the Criminal Cabal, that is responsible for the thousands of deaths in New York back in September 11, 2001 and millions more in the subsequent War of Terror that the Bush-Cheney administration launched against Iraq, Afghanistan and elsewhere, is shrinking.
Recently, Lawyers’ Committee for 9/11 Inquiry, a nonprofit public interest organization, has announced its receipt of a letter from the U.S. Attorney for the Southern District of New York, which stipulated its commitment to abide by the law.
FOR IMMEDIATE RELEASE      NOVEMBER 26, 2018
UNITED STATES ATTORNEY AGREES TO COMPLY WITH FEDERAL LAW REQUIRING SUBMISSION TO SPECIAL GRAND JURY OF REPORT BY LAWYERS’ COMMITTEE AND 9/11 VICTIM FAMILY MEMBERS OF YET-TO-BE- PROSECUTED 9/11 RELATED FEDERAL CRIMES

The Lawyers’ Committee for 9/11 Inquiry, a nonprofit public interest organization, announces its receipt of a letter from the U.S. Attorney for the Southern District of New York in response to the Lawyers’ Committee’s April 10, 2018 Petition and July 30, 2018 Amended Petition (https://lawyerscommitteefor9-11inquiry.org/lc-doj-first-amended-grand-jury-petition/) demanding that the U.S. Attorney present to a Special Grand Jury extensive evidence of yet-to-be-prosecuted federal crimes relating to the destruction of three World Trade Center Towers on 9/11 (WTC1, WTC2 and WTC7).  The U.S. Attorney, in his November 7, 2018 letter to the Lawyers’ Committee, stated:
“We have received and reviewed The Lawyers’ Committee for 9/11 Inquiry, Inc.’s submissions of April 10 and July 30, 2018. We will comply with the provisions of 18 U.S.C. § 3332 as they relate to your submissions” (emphasis added). (The U.S. Attorney’s letter is attached. It is also available at https://lawyerscommitteefor9-11inquiry.org/7-nov-2018-u-s-attorney-geoffrey-berman-will-comply-with-18-usc-section-3332/)
The U.S. Attorney’s letter does not spell out the steps that will be taken to comply, but 18 U.S.C. § 3332 is clear as to what these steps must be. This law states: “[a]ny such [United States] attorney receiving information concerning such an alleged offense from any other person shall, if requested by such other person, inform the [Special] grand jury of such alleged offense, the identity of such other person, and such attorney’s action or recommendation.” This law also states that “(a) It shall be the duty of each such [special] grand jury impaneled within any judicial district to inquire into offenses against the criminal laws of the United States alleged to have been committed within that district.”
This letter from the U.S. Attorney was signed by Michael Ferrara and Ilan Graff, Chiefs, Terrorism and International Narcotics Unit. On November 24, 2018, the Lawyers’ Committee replied, thanking the U.S. Attorney and expressing support for a thorough inquiry into the crimes reported in the Lawyers’ Committee’s petitions.
The Lawyers’ Committee’s April 10th 52-page original Petition was accompanied by 57 exhibits (https://lawyerscommitteefor9-11inquiry.org/lc-doj-grand-jury-petition/) and presented extensive evidence that explosives were used to destroy three WTC buildings.
That evidence included independent scientific laboratory analysis of WTC dust samples showing the presence of high-tech explosives and/or incendiaries; numerous first-hand reports by First Responders of explosions at the WTC on 9/11; expert analysis of seismic evidence that explosions occurred at the WTC towers on 9/11 prior to the airplane impacts and prior to the building collapses; and expert analysis by architects, engineers, and scientists concluding that the rapid onset symmetrical near-free-fall acceleration collapse of three WTC high rise buildings on 9/11 exhibited the key characteristics of controlled demolition.
The Lawyers’ Committee’s July 30th Amended Petition addresses several additional federal crimes beyond the federal bombing crime addressed in the original Petition. The Lawyers’ Committee concluded in the petitions that explosive and incendiary devices preplaced at the WTC were detonated causing the complete collapse of the WTC Twin Towers on 9/11 and increasing the tragic loss of life.
Attorney Mick Harrison, Litigation Director, stated: “The failure of our government to diligently investigate this disturbing evidence has contributed to the erosion of trust in our institutions. The Lawyers’ Committee felt it was out duty as public citizens to submit this evidence to the U.S. Attorney for submission to the Special Grand Jury.”
Attorney David Meiswinkle, President of the Lawyers’ Committee’s Board of Directors, stated: “We have offered to assist the U.S. Attorney in the presentation of this evidence to a Special Grand Jury. We have also requested that Architects and Engineers for 9/11 Truth provide us expert support in the hope that our organizations will be invited to make a joint presentation of relevant evidence to the Special Grand Jury.”
Attorney William Jacoby, Lawyers’ Committee Board Member, stated: “We call upon the public and legal community to contact us and support our efforts to contribute to this grand jury process and to monitor and ensure compliance by the Justice Department.”
Executive Director Ed Asner stated: “The U.S. Attorney’s decision to comply with the Special Grand Jury Statute regarding our petitions is an important step towards greater transparency and accountability regarding the tragic events of 9/11.”