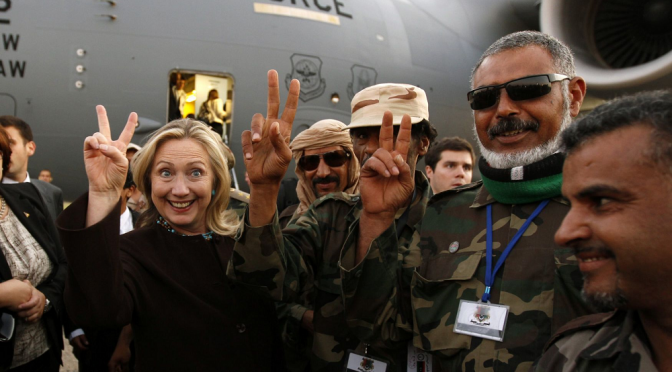 Following allegations of sloppy accounting, potential tax fraud and pay-to-play, the Clinton Foundation will be under a Congressional microscope this week after three whistleblowers have come forward and agreed to testify – one of whom secretly submitted 6,000 pages of documents to the IRS and FBI in August of 2017, and all three of whom have submitted various documents to Congressional investigators.
Rep. Mark Meadows (R-NC), Chairman of the House Freedom Caucus, told Fox News’s Martha MacCallum on Monday night that there are three whistleblowers who have spent the past two years investigating the Clinton Foundation, and have “explosive” allegations which they will share during Thursday testimony on Capitol Hill.

MACCALLUM: OK. With regard to the investigation, which doesn’t get a lot of attention, into the Clinton foundation, the DOJ designated John Huber to look into this. They have 6,000 pages of evidence that they’ve gone through. The foundation raised $2.5 billion, and they’re looking into potential improprieties.
What’s next on this investigation?
MEADOWS: Well, I think for the American people, they want to bring some closure, not just a few sound bites, here or there, so we’re going to be having a hearing this week, not only covering over some of those 6,000 pages that you’re talking about, but hearing directly from three whistleblowers that have actually spent the majority of the last two years investigating this.
Some of the allegations they make are quite explosive, Martha. And as – we just look at the contributions. Now everybody’s focused on the contributions for the Clinton Foundation and what has happened just in the last year. But if you look at it, it had a very strong rise, the minute she was selected as secretary of state. It dipped down when she was no longer there.
And then rose again, when she decided to run for president. So there’s all kinds of allegations of pay-to-play and that kind of thing.

As we noted in late November, the Clinton Foundation has seen donations plummet approximately 90% over a three-year period between 2014 and 2017.
While Hillary Clinton was Obama’s Secretary of State, however, the State Department authorized $151 billion in Pentagon-brokered deals to 16 countries that donated to the Clinton Foundation – a 145% increase in completed sales to those nations over the same time frame during the Bush administration, according to IBTimes.
Meanwhile, John Solomon of The Hill reported on Tuesday that one whistleblower who submitted 6,000 pages of evidence through a firm composed of former federal law enforcement investigators, MDA Analytics LLC., has provided evidence of potential tax crimes as well as a “culture of noncompliance.”

That submission made with the IRS, and eventually provided to the Justice Department in Washington and to the FBI in Little Rock, Arkansas, alleges there is “probable cause” to believe the Clinton Foundation broke federal tax law and possibly owes millions of dollars in tax penalties. That submission and its supporting evidence will be one focus of a GOP-led congressional hearing Thursday in the House.
The foundation strongly denies any wrongdoing. But it acknowledges its own internal legal reviews in 2008 and 2011 cited employee concerns ranging from quid pro quo promises to donors, to improper commingling of personal and charity business. -The Hill

In some instances the Clinton Foundation appears to have misled the IRS, or lied when filling out forms. For example, the Foundation retracted a bid to conduct fundraising in Utah after they refused to correct a filing error which state officials would not allow.
When contacted for comments, the Clinton Foundation admitted their errors, but told Solomon they were akin to “minor traffic violations.”

Clinton Foundation whistleblowers have hundreds of pages of evidence

Allegations of “pay to play” and misappropriation of funds by the Clinton Foundation are documented in hundreds of pages of evidence provided by three witnesses, according to Rep. Mark Meadows, R-N.C.
Meadows, as chairman of the House Oversight Subcommittee on Government Operations, will lead the panel’s investigative hearing next week on the status of the Clinton Foundation case, Fox News reported
“Whenever we look at the possibility of ‘pay to play’ by government officials, current or former, it demands answers,” Meadows said, “and anyone who uses public office to sell access for their own financial benefit must be held accountable.”
John Huber, who has been working with the Justice Department and the FBI on the probe, will testify before the committee.
Already, investigative journalist Peter Schweizer has pieced together evidence the Clintons exchanged political favors for donations and pushed favorable policies to receive donations.
The New York Times reported Trump told his White House counsel earlier this year he wanted the DOJ to prosecute Clinton.
In March, then-Attorney General Jeff Sessions appointed Huber to investigate the Clinton Foundation. Sessions decided, however, to reject a request by House Republicans to appoint a special prosecutor to investigate Hillary Clinton regarding allegations the sale of Uranium One to a Russian state-owned company while she was secretary of state was related to donations made to the Clinton Foundation.
Meadows said in a Twitter message at the time that Sessions’ decision not to appoint a special counsel was “disappointing.”
“So the Obama DOJ can open a legally questionable investigation into the Trump campaign — allegedly based on a campaign volunteer mouthing off at a London bar — but this DOJ can’t appoint a second special counsel after all the troubling documents we’ve seen? Disappointing,” he wrote.
Schweizer, the author of “Clinton Cash: The Untold Story of How and Why Foreign Governments and Businesses Helped Make Bill and Hillary Rich,” was the first to report nine foreign investors in the Uranium One deal gave $145 million to the Clinton Foundation. The New York Times confirmed in an April 2015 story Uranium One’s chairman used his family foundation to make four donations totaling $2.35 million to the Clinton Foundation. The Times found that the Clintons, however, did not publicly disclose the contributions, despite an agreement Hillary Clinton had struck with the Obama White House to publicly identify all donors.
In addition, Bill Clinton received a $500,000 speaking fee from a Russian bank tied to the Kremlin in 2010, when Hillary Clinton opposed sanctions on Moscow. She reversed her position the following year.