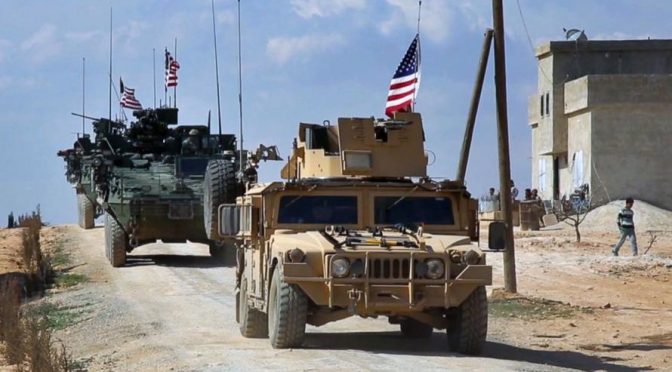 According to various news reports, the validity of which is always questionable, US President Donald Trump has ordered the withdrawal of all US troops from the portion of Syria illegally occupied by US troops.
This report is surprising as only a few days ago the US Department of Defense declared that any Syrian, Russian, or Iranian action against ISIS in the part of Syria occupied by US troops was “unacceptable.”
In other words, the Pentagon declared that the part of Syria still in ISIS’s hands was under US protection and was not to be attacked by Syria and its allies.
The question before us: Is Trump’s reported order of withdrawal going to happen?
It is too soon to say. As I write no support for Trump’s withdrawal order has been reported in the media. Even the official statement by the White House’s own spokesperson, Sarah Sanders, is unclear:

“We have started returning United States troops home as we transition to the next phase of this campaign.”

In other words, the campaign against Syria is not over, but “the next phase” apparently doesn’t need US troops. What is the next phase? Until we know the answer, we do not know whether Washington’s campaign against Assad is over.
Perhaps a decision has been made to bypass Syria for now and to knock out Iran before the Russians can intervene there.
The presstitutes, at home and abroad, who serve Israel and the Military/Security Complex and never the Truth, are opposed to ending the campaign against Syria.
The Guardian, once a legitimate working class newspaper, but now to all appearances a CIA asset, writes that Trump’s “walking away now is a remarkable gift for ISIS.”
Bloomberg, continuing its campaign against Trump, reported that Trump’s withdrawal order “left Washington’s Kurdish allies in the lunch,” subject to Turkey’s disposal. Even worse, according to Bloomberg, Trump’s withdrawal “leaves Syria’s future in the hands of Moscow and Tehran, allies of President Bashar al-Assad whose intervention in the conflict averted his potential defeat.”
Warmonger US Republican Senator Lindsey Graham, a total disgrace to the electorate who put and keeps this fool in office, quickly demurred from Trump’s sensible decision. War forever is Graham’s policy. It proves he is a tough guy who stands up for America.
Mark Dubowitz, chief exercutive officer of the Foundation for Defense of Democracies (an extinct political species in the West), who “has closely advised the Trump administration,” said that “pulling U.S. troops out of Syria would be a gift to Putin and to the mullahs in Tehran. And it would be a disastrous gift for the region.”
Brett McGurk, Trump’s special envoy to the fake “global coalition to defeat ISIS,” an organization created and financed to create deceptive cover for the support of ISIS, disavowed Trump’s reported decision:

“Enduring defeat of a group like this means you can’t just defeat their physical space and then leave.”

Israel, which has reduced the President of the United States to a two-bit Israeli puppet, as it intends to do also to President Putin of Russia, is unlikely to permit Trump to withdraw US troops from Syria.
Why? The answer is that Syria and Iran, which is also on the Trump/Israeli hit list, support the only army in Lebanon worthy of the name—the Hezbollah militia that prevents Israel’s occupation of southern Lebanon.
Israel’s goal of occupying southern Lebanon is part of the Zionist plan for Greater Israel—from the Nile to the Euphrates. There is also the issue of the water resources in southern Lebanan, which Israel covets. If Syria and Iran can be reduced to the chaos, death, and destruction that Israel has caused in the Middle East through their neoconservative agents in Washington, Hezbollah would be left without any financial and military support, enabling Israel to seize southern Lebanon.
Many in the Western world have never heard of Israel’s interest in Lebanon. With the extraordinary control that the elite have established over communications and explanations, people are unaware that the American assault on the Middle East began with the neoconservatives’ published agenda of overthrowing the Middle East including Saudi Arabia, whose leadership saw the writing on the wall and went over to the Israeli side. The neoconservative agenda, as General Wesley Clark made clear, was handed to the Pentagon and became official US policy.
Israel operating through their neoconservative agents successfully used the United States to destroy Iraq, Libya, Somalia, almost Syria until the Russians intervened, and to demonize Iran and set Iran up for attack. The cost to the US taxpayers runs in the trillions of dollars. Americans also paid the costs in the deaths and maiming of relatives and loved ones, and in the sullied reputation of their country, now widely regarded as a war criminal government.
Despite these massive blows Israel has delivered against the United States, blows unmatched by those of any enemy, Israel has gone on to compromise the independence of 26 US state governments, with another 13 up for grabs. See this.
How do we explain the capture of the mighty United States by a tiny numerically insignificant people who are isolated in the world?
This article was originally published on the author’s blog site: Paul Craig Roberts Institute for Political Economy.
Dr. Paul Craig Roberts is a frequent contributor to Global Research.

2 thoughts on “Withdrawal from Syria?”