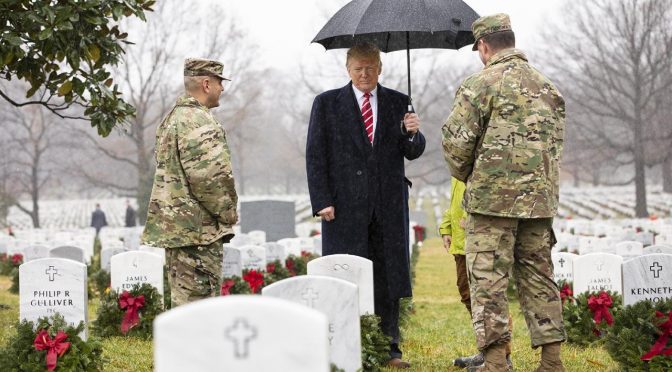 President Trump is beginning to find some room to act upon his actual intentions, having consolidated support in the Senate in the election, making impeachment essentially impossible, while the British Russiagate hoax is crumbling.
In the past 24 hours, Trump struck two blows on the Empire, declaring that all US troops and State Department operatives are being pulled out of Syria, quickly, while also declaring that the US and Mexico will proceed with large-scale joint investment into job-creating programs in the poverty-stricken (and drug-infested) areas of southern Mexico and the Central American nations of Honduras, El Salvador, and Guatemala.
On Syria, the President tweeted: “We have defeated ISIS in Syria, my only reason for being there during the Trump presidency.” His spokesperson confirmed that the pullout will proceed rapidly. According to the New York Times, some Pentagon officials have been fighting tooth and nail to stop him, or at least make it a phased withdrawal, but Trump wouldn’t break. This happened on the same day that the “Astana Group” — Russia, Turkey, and Iran — came to an agreement with the Syrians and the UN to establish a Constitutional Committee to draft a Constitution for a new Syrian political structure. Trump has repeatedly stressed that he is not interested in “regime-change”, in Syria or anywhere else.
On Mexico, Trump has found common ground with the new Mexican president, Andrés Manuel López Obrador on the necessary means to deal with the illegal migration crisis — create jobs. AMLO on Tuesday morning said: “This is a new, different way of dealing with the problem of migration, which addresses the causes. The day is going to come, very soon, in which people are not going to emigrate from Mexico — at least, that is my dream.” The deal agreed to yesterday will approximately double the US planned investment into the region, perhaps exceeding $10 billion.
Now the battle begins to turn this initiative into the start of the giant regional infrastructure program required for defeating the drug cartels and the enormous poverty in the region—such as building the railroad connecting the continents of North and South America proposed since the McKinley administration.
It is precisely this commitment to peace through development, and to cooperation with Russia and China in that vision for the future, which has driven the frantic British Empire effort to bring Trump down. The MI6-fabricated “Russia-collusion” scam has been exposed as an utter fraud, and, even while Mueller and his team continue to manufacture as many potential charges against Trump as possible (none having anything to do with Russia, Mueller’s assigned target), Trump is moving on.
The British Lords let the cat out of the bag on Tuesday, with a report released by the International Relations Committee of the House of Lords, titled “UK Foreign Policy in a Shifting World Order.” As is the way of the Empire, when the current means of wielding world power is destroyed, they do not slink quietly into the night. Their means for the past several decades, since the death of Franklin Roosevelt and John F. Kennedy, has been to use US “brawn” to achieve British imperial policy — fighting colonial wars in Southeast and Southwest Asia, and imposing “IMF conditionalities” to prevent any real development in the former colonies.
The Lord’s report whines that, were Trump to win a second term, “the damage to US/UK relations (the UK’s most important international relationship) will be longer lasting, and the Government will need to place less reliance on reaching a common US/UK approach to the main issues of the day than has been the case in the past.” The danger in this, they add, is that China and Russia also pose a threat to the “rules-based international order” (their euphemism for the British Empire). And India, they add may also get away from their imperial rule.

54 thoughts on “Pullout from Syria, Development in Mexico and Central America”