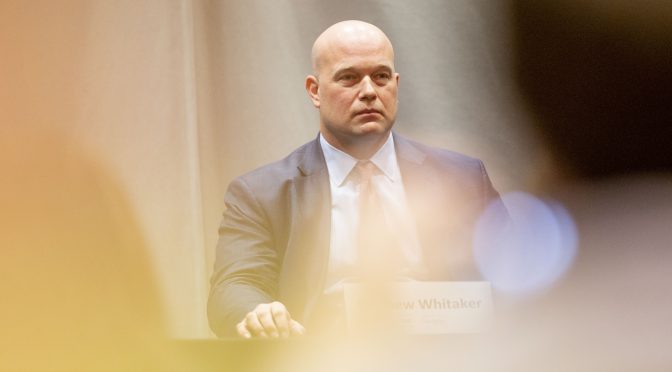 High level extortions are made of this. China is considered far more dangerous than Russia by the Deep State CIA and State Department. It’s no wonder that the Trump administration is giving in to the pressure from sections inside the US government that are far beyond his executive control, to pin down civilian executives with close ties to the Chinese government.
The US Department of Justice is ramping up its pressure against China’s most priced tech giant Huawei for having the edge in 5G and AI technologies that will be the foundation of the next stage of our devolution, i.e. Technocratic Dictatorship.
Unsealed indictments include collusion with Iran to bypass US sanctions against the latter.

The Huawei technology company is also being accused of stealing trade secrets, including a robot’s hand for possible replication, and has committed bank fraud in its business with Iran.
Of course, there was no violation prior to the US sanctions on “terrorist exporter” Iran. So, with the sanctions against Iran, the US created its own pretext for arm twisting the Chinese leadership in the hope that it will give in to more “trade concessions” from them.
In recent years, China has been investing heavily in real estate and tech companies in the US that are otherwise could not stand the competition coming from abroad simply because of its high operational costs. However, these investments are considered as nothing but Chinese acquisitions for the purpose of establishing an imperial foothold in America.
Eerily, the US is afraid having its own method being used against it.  Objectively, China really is just using value in exchange for value with these investments, and not dirty tricks like economic sanctions and black propaganda in pursuit of regime change like what the US is trying to accomplish in oil-rich Venezuela, which is in tangent with British robber barons’ desire to hostage the entire Venezuelan economy.

As far as espionage is concerned, every country is doing it against everyone it deemed a threat to its national and corporate security. The Five Eyes countries have been doing their surveillance on their own citizens 24 hours a day, for decades now, as per Edward Snowden revelations.
Either way, China is now sending high level personalities to settle the issue, and free a Chinese national Huawei CFO Meng Wanzhou.
Otherwise, China could always unload more of its $1.2 trillion worth of US treasury bonds to bring the Deep State down for good. Already, some Deep State companies are already reporting end of year meltdowns.

Caterpillar’s 4Q earnings fell short, making it the first miss in almost two years, with the construction segment’s weakness in part due to an unexpected decline in China a worrisome development.
–Karen Ubelhart and Christina Constantino, Bloomberg Intelligence analysts
Shares of Japanese rivals Komatsu Ltd. and Hitachi Construction Machinery Co. each lost more than 5 percent in Tokyo on Tuesday. In China, Sany Heavy Industry Co. and other heavy equipment makers fell at the open.
Stanley Black & Decker CEO Jim Loree wasn’t shy about raising the alarm bells on China last week, saying it was facing slowing economic growth there, along with most of the rest of the world. The previous week, paint maker PPG talked about “sluggish industrial activity in China” among pressures that the company will hit the first half of 2019.
Technology
Santa Clara, California-based Intel Corp., whose processors are the main component in most of the world’s personal computers and servers, cited softness in China among the reasons for its lower-than-expected full-year forecast last week. Nvidia, the biggest maker of chips for computer graphics cards, echoed those comments on Monday, saying that “deteriorating macroeconomic conditions, particularly in China, impacted consumer demand” for its products.
Nidec Corp., a Japanese maker of precision motors used in computer drives, cut its profit outlook by 26 percent for the year ending March 31, blaming it on the U.S.-China trade war. It reported a 43 percent drop in operating profit for the quarter through December.
Samsung Electronics Co.’s quarterly profit and revenue missed estimates on sputtering demand for memory chips during the last three months of 2018, the same period Apple saw anemic sales in China. The South Korean company has been losing share for its smartphones for years in China, but the slowdown there is now threatening to hurt its important chips business.
In Japan, chip-equipment manufacturer Tokyo Electron Ltd. dropped as much as 4 percent, while Advantest Corp. slid 7.1 percent. Samsung Electronics Co. fell 1.6 percent in Seoul, while Taiwan Semiconductor Manufacturing Co. declined 3.1 percent.
Car sales in China fell last year for the first time in more than 20 years.
“China is under threat, for sure,” Volkswagen AG Chief Executive Officer Herbert Diess said in a Bloomberg TV interview in Davos, Switzerland, last week. “This year will be challenging.”
Ford Motor Co. posted a fourth-quarter loss of $534 million in China last quarter. Wholesales by the carmaker’s China joint ventures — a measure of how many vehicles are shipped to dealers — plunged 57 percent during the period. By the end of last year, only about a third of the company’s dealers were profitable, Jim Farley, Ford’s president of global markets, said on a Jan. 23 earnings call.
U.S. auto-parts supplier Lear Corp. offered more color on China. Lear, whose biggest customer is Ford, said it expected orders for parts like seating systems to fall more than 10 percent this year.” – Bloomberg Asia

The US financial and industrial bankruptcy are reaching  unsustainable levels, and all America needs to do is to rid itself of parasites, and make way for positive development that the rest of the world is more than willing to assist.
The proposal is to write off all individual debts when all corporate vultures, Deep State embedded SES operators, are indicted and put in jails, everyone of them.  Obviously, this effort cannot be accomplished by one man alone. The US President is never in full control of the government.
Therefore, Americans must put in place real patriotic officials in charge of their government rather than just poking around the keyboards and uploading their daily news online about how their country is controlled by the bankers.
Each of them already knows the extent of the problem, now it’s time to act on their possible solutions. American needs to understand that their failure to preserve the Republic entrusted  to them a long time ago is the root cause of its corporate decadence right now.
This is not a hopeless case, but they must learn something from China and the rest of Asia.
If a small country like the Philippines can put in office a decisive and courageous leader by virtue of a grassroots campaign, so too can Americans choose their own leaders that are truly committed to lead the states for the better, and put them all in the office without a costly campaign.

The vernaculars simply said, that Duterte has no other choice but to give in to the pressure and demand of the people for him to run as for president in 2016.
Here’s another look at what happened 3 years ago…
https://youtu.be/Zrq39j5hOKE?t=305
There are 3.5 American for every Pinoy, surely you can find better government officials in your flock. Do something starting today, and make no excuses later.
The Chinese, on the other hand, are not boastful. They just let their actions do the talking for them. Yet, we wonder and protest how much they have achieved is such a short time. Now, they are collectively reaping the fruits of their own “cheap” labor, e.g. more than 700 million lifted from poverty, and still counting.
Can we, therefore, expect the return of high quality American made goods anytime soon?
Here’s a short documentary from a Western independent medium about why we can trust the Chinese more than the Western oligarchy in these issues.