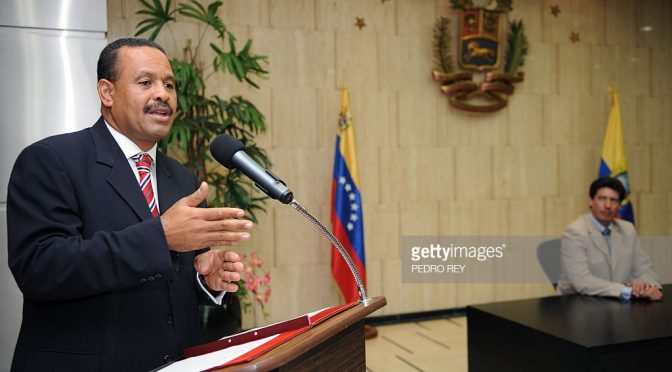 The Venezuelan government has confirmed the existence of “significant” coltan deposits south of the Orinoco River, as well as proven gold reserves valued at $100 billion.
By Latin American Herald Tribune
Basic Industries and Mining Minister Rodolfo Sanz told a press conference that only seven countries in the world have reserves of coltan – a valuable black mineral that combines niobite and tantalite and is used in cell phones and computer chips – in sufficient quantities for export.
Sanz said that “strategic mineral,” also known as “blue gold,” is an irreplaceable material in products such as cellular phones and electromagnetic instruments for aviation and other hi-tech industries.
“Without coltan, there are no cell phones,” the minister said in illustrating the importance of that mineral.
Reserves of coltan and other strategic minerals were located south of the Orinoco River – in eastern Venezuela – as part of an aerial survey carried out with Iranian cooperation.
Sanz did not reveal the quantity of the coltan reserves nor their precise location, but he said that diamond, phosphate, titanium and lead deposits also were found.
He also referred to gold resources and said Venezuela has the world’s largest reserves of that precious metal after South Africa. According to the minister, Venezuela’s potential reserves total some 15,500 tons and its certified reserves are valued at some $100 billion.
Separately, Science and Technology Minister Jesse Chacon, who accompanied Sanz at Friday’s press conference, confirmed that important deposits of kaolinite have been found and are being developed with assistance from Russia.
He also said Russia will offer Venezuela the technological assistance it needs for the treatment of recently discovered uranium deposits.
Chacon, who said uranium will be used for energy production “because oil will run out,” ruled out the possibility of using that mineral for military purposes.
The minister said the idea is to use the country’s natural resources and not sell them in their raw, unprocessed form, to international clients.
“We have all the right to use our uranium for the benefit of Venezuelans and not sell it at bottom-of-the-barrel prices to the French or Americans,” Chacon said.
The minister did not give a timeframe for the development of Venezuela’s nuclear sector nor an estimate of the size of the country’s available uranium reserves.
http://www.laht.com/article.asp?ArticleId=345496&CategoryId=10717