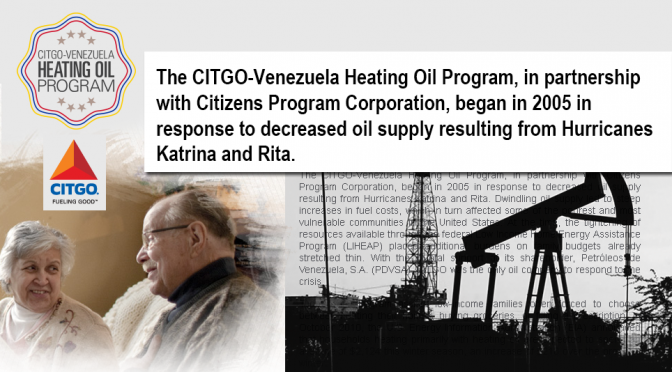 For eight straight years [2005-2013], Venezuela’s state oil company has donated free heating oil to hundreds of thousands of needy Americans. Where are these beneficiaries now that Venezuela is under attack by their own government?
The article below was published in 2013, but is worth reposting to provide a clearer context as to why the latest Deep State interference against the Venezuelans must be resisted by all concerned parties:
The CITGO-Venezuela Heating Oil Program has helped more than 1.7 million Americans in 25 states and the District of Columbia keep warm since it was launched back in 2005. The program is a partnership between the Venezuelan state oil company Petróleos de Venezuela, S.A. (PDVSA), its subsidiary CITGO and Citizens Energy Corporation, a nonprofit organization founded by former US Rep. Joseph P. Kennedy II that provides discounted and free home heating services and supplies to needy households in the United States and abroad. It has been supported from the beginning by Venezuelan President Hugo Chávez.

In 2005, a pair of devastating hurricanes, Katrina and Rita, led to dwindling oil supplies and skyrocketing fuel costs. Some of the poorest and most vulnerable Americans, including many elderly people on fixed incomes, found themselves having to choose between heating their homes or providing food, clothing or medicine for themselves and their families. Since that first winter, CITGO has provided 227 million gallons of free heating oil worth an estimated $465 million to an average of 153,000 US households each year. Some 252 Native American communities and 245 homeless shelters have also benefited from the program. This winter, more than 100,000 American families will receive Venezuelan aid. With the US government estimating that households heating primarily with oil will pay $407 (19 percent) more this year than last, the program remains an invaluable helping hand to many needy Americans.

“The CITGO-Venezuela Heating Oil Program has been one of the most important energy assistance efforts in the United States,” CITGO CEO Alejandro Granado said at the Night of Peace Family Shelter in Baltimore, Maryland, where he and Citizens Energy Corporation Chairman Kennedy launched the 2013 program. “This year, as families across the Eastern Seaboard struggle to recover from the losses caused by Hurricane Sandy, this donation becomes even more significant.”

“The federal fuel assistance program reaches only one-fifth of all the eligible households in the US,” Kennedy said in Baltimore. “Millions of families just go cold at night in their own homes.”

US Rep. Elijah Cummings (D-MD), who was on hand at the Baltimore launch, expressed his gratitude to CITGO.

“The demand is greater and the resources are shorter,” Cummings said to widespread “amens” from the packed house. “We must not turn our heads away from the working poor– remember, we could be in the same position. The help you provide to families is bigger than just the oil. It’s about helping children lead stable lives.”

The people gathered at the shelter prayed for the recovery of Venezuelan President Hugo Chávez, whose condition is reportedly improving following cancer surgery in Havana, Cuba.
Chávez is often demonized as a dictator by many US politicians and by the US corporate mainstream media. But he remains wildly popular in Venezuela, where he has won four straight presidential elections. He was reelected last October with 54.4 percent of the vote. Although his leadership style is increasingly authoritarian, his Bolivarian Revolution– characterized by popular democracy, economic independence, equitable distribution of national wealth and reduced corruption– has improved the lives of millions of Venezuela’s poorest citizens and inspired tens of millions of Latin Americans seeking more just societies to vote in leftist governments throughout the region.
US critics claim that Chávez is anti-American. This oversimplifies matters– while he is an ardent anti-imperialist who raised eyebrows and ire in Washington and on Wall Street by nationalizing the assets of foreign petroleum companies which many Venezuelans asserted were exploiting the country’s natural resources, the US remains Venezuela’s most important trading partner. And while Chávez is highly critical of US policies and actions around the globe, he is far from alone in his opposition. His distaste for Washington has also no doubt been influenced by the fact that senior officials in the George W. Bush administration were deeply involved in an attempted 2002 coup d’état against his popular regime.
All of this matters little to most of the 1.7 million Americans who have received free fuel from the CITGO-Venezuela Heating Oil Program.

“All I know is he was kind to the people of the United States,” program recipient Alice Maniotis, a New York grandmother on a fixed income, said of Chávez. “He rules differently, like Obama rules differently,” Maniotis told RT last year. “Who are we to tell these people how to live? Are they invading our country? They’re not. They’re being generous to give us what comes out of their earth at no charge. So could you really have ill feelings against them?”

Kennedy thanked CITGO, Venezuela and Chávez for “help[ing] more than 400,000 people stay warm and safe this winter,” adding that he has approached numerous major oil-producing nations as well as some of the largest US oil companies and asked them if they were interested in helping the poor heat their homes.

“I don’t see Exxon responding,” he told the crowd in Baltimore. “I don’t see other major oil companies heating the homes of the poor.”
“They all said no,” Kennedy added, “except for CITGO, President Chávez and the people of Venezuela.”