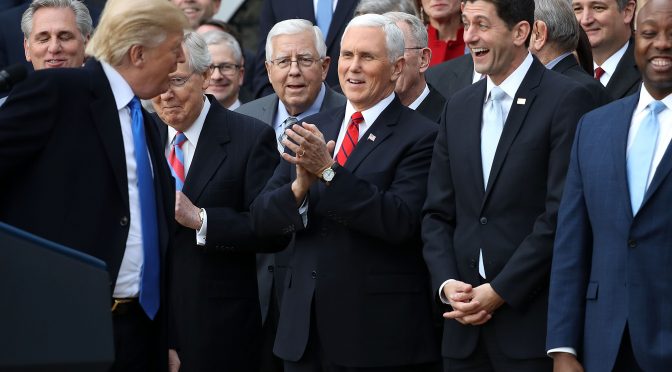 The Trump promoted GOP scam was all about benefiting corporate interests and high-net-worth households.
Wage hikes attributed to tax cuts have been mostly hype. Big business gained hundreds of billions of dollars from the law – used mostly for stock buybacks and generous handouts to executives, workers getting shortchanged.
Thousands got pink slips. The federal deficit is ballooning by over a trillion dollars annually, social benefits slashed to help pay for the tax cuts, a transparent wealth transfer scheme.
Analyzing the tax cut scam a year later, Americans for Tax Fairness (ATF) said the following:

The GOP legislation encourages offshoring of US jobs and production by taxing foreign profits of American companies “at half the rate on domestic earnings.”
The so-called “small-business” tax cut has gone mostly to “wealthy owners of big firms. Most owners of pass-through businesses—sole proprietorships, partnerships and S corporations—are now generally allowed to exclude 20% of their business income from taxation,” ATF explained.
By 2024, 60% of the tax breaks will go to America’s 1%. The weakened estate tax widens the wealth gap. David Stockman estimates the great GOP tax cut heist will increase the federal debt to around $35 trillion by 2028.
Today it’s $22 trillion, rising exponentially. Treasury Secretary Mnuchin lied claiming the tax cuts would pay for themselves through through increased economic growth generating more tax revenues from lower rates.
“(I)nstead the deficit is increasing considerably due to the tax cuts,” said ATF – mostly because corporate tax revenue dropped by about one-third, almost $100 billion year-over-year since the December 2017 law took effect.
The GOP plan for checking the spiraling debt is by cutting social services for ordinary Americans – notably Medicare, Medicaid and Social Security.
Increased corporate profits went mostly to shareholders and corporate executives, not workers.
Trump lied saying corporate America would use the windfall tax breaks by giving the average US household a $4,000 pay raise, “shower(ing) workers with bonuses,” along with generating “massive investments.”
A year later, “corporations are mostly using their actual and anticipated tax cuts and their rising profits to buy back their own stock, which principally further enriches wealthy shareholders and top corporate executives,” ATF explained.
According to its database, “$853 billion in share repurchases” were announced in 2018 – “120 times more” than workers got in pay increases last year, a slim “$7.1 billion” for the entire 128.5 million US workforce – about $55 per worker if my math is right.
Contrary to Trump’s promise, “worker wages are getting no boost from the tax cuts,” said ATF. “(O)nly 4.4%” of them received a monetary benefit ascribed to the measure.
Year-over-year-through December, inflation-adjusted “average real hourly wages for all workers rose just 0.8%, while average weekly wages actually fell, because employees were working fewer hours,” ATF explained, adding:
“Special interests are the GOP tax law’s big winners” – what was predicted before the law was enacted at yearend 2017.
Polls show most Americans know they were scammed. Benefits gotten are too meager to matter, and it gets worse. Millions of US workers expecting tax refunds either aren’t getting them or will receive much less than they anticipated.
Last week, the IRS said around 30 million US taxpayers will owe the agency money, three million more than before the GOP tax cut.
Average refunds going out are down 8.4% year-over-year so far. The American Institute of CPAs vice president Edward Karl said “(t)here are going to be a lot of unhappy people over the next month. Taxpayers want a large refund.” Millions will be sorely disappointed.
Last April, Trump falsely said not only will Americans “save a lot of money,” but the filing process will be simplified on “one page, one card,” adding:
“You’ll have a nice, simple form next year. This will be the last year (under the old system). So take pictures of it and enjoy it. This is the last time you’ll have to file a very complex and big tax form. It will be much easier starting next April.”
Tax code changes made things more complicated, along with ordinary Americans benefitting little from the great GOP tax cut heist.
Award-winning author Stephen Lendman lives in Chicago. He can be reached at [email protected]. He is a Research Associate of the Centre for Research on Globalization (CRG)
While there seems to be a clear cut view between those who like Trump, or not, just for being Trump, but it is our “outsiders’ view” that since America has been bankrupted by the Deep State for at least two centuries, that it is Trump’s job to soften the impact of that long running bankruptcy, that is already reaching beyond its peak, by extracting as much concessions as possible from the new economic powerhouse, China, and other resource-rich countries that it can still bully for the time being.
The GOP tax cut is justified as a way to bring jobs home from China, and reestablish a vibrant slavery system locally.
The next 1000-page spending bill worth $1 trillion will be voted on without anyone reading it first.