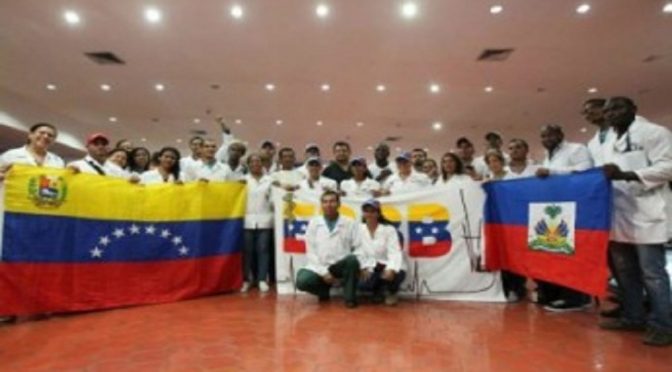 The Black Alliance for Peace (BAP) remains in steadfast solidarity with the people of Haiti, whose revolutionary spirit in 1791 showed the world what is possible when Africans organize and struggle together to remove their shackles and dispose of their oppressors.
The recent revelation that Haitian President Jovenel Moïse embezzled nearly $4 billion Venezuela had loaned the island nation a decade ago caused the popular uprising taking place in the country. And this is where we see where U.S. interventions in Venezuela and Haiti connect.
Moïse is nothing more than a puppet controlled by the U.S. government to disallow Haitian self-determination.
The Haitian people are no strangers to the tentacles of U.S. interventionism, which has been in place since the 19-year occupation commenced by President Woodrow Wilson in 1915. The occupation included the seizure and relocation of Haiti’s financial reserves to the United States, as well as a re-write of the nation’s constitution, which allowed foreign entities to enjoy land-owning rights.
Over time, the actors associated with the U.S. stranglehold on Haiti and its right to self-determination may have changed—from Wilson, to Clinton, to Obama—but the strategy and modus operandi have remained consistent. The method involves financial manipulation, election rigging and racketeering. We are witnessing a parallel between 1929—when U.S. military forces suppressed a nationwide strike in Haiti and peaceful demonstrations by firing live ammunition on 1,500 people—and recently as Haitians have protested, demanding the ouster of U.S.-backed Moïse.
Moïse’s grip on power is being pried from his fingers as police officers continue to defy his orders, stand down and refuse to fire on protesters.
Continued U.S. oppression of Haiti was most recently demonstrated when U.S. sanctions against Venezuela made it impossible for Haiti to repay their loan as part of the PetroCaribe deal, thereby ending the arrangement in 2017. Moïse further demonstrated his loyalty to the United States when he directed his ministers to support a U.S.-engineered vote at the Organization of American States (OAS) that declared the illegitimacy of Venezuelan President Nicolás Maduro.
As internationalists who understand the interconnectedness of oppressed peoples’ struggles, BAP declares its solidarity with the people of Haiti in the struggle to end U.S. imperialism in Haiti, Venezuela and all republics of the Caribbean and Latin America. The people of Haiti are once again attempting to win back their nation. All who believe in principle of self-determination should stand with them.
Copyright © Black Alliance for Peace, Black Alliance for Peace, 2019

Rage at rule of the rich and the corrupt hits Haiti 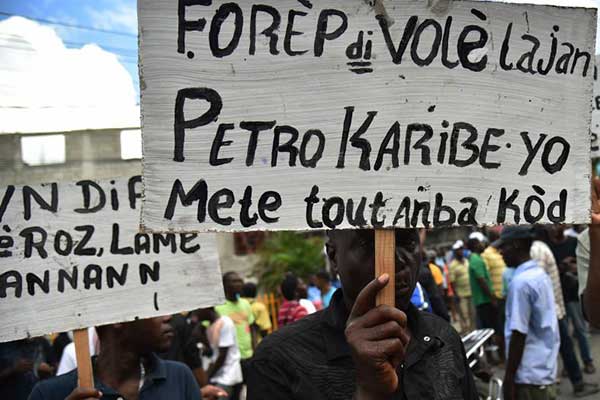 by Alistair Farrow
Huge protests and a general strike in outrage at corruption have gripped Haiti.
President Jovenel Moise’s regime has been heavily implicated in the PetroCaribe scandal. This channelled government revenues into the pockets of bosses and politicians.
The government has also come under fire for passing the costs of an economic crisis on to ordinary people in a country already devastated by imperialism and neoliberalism.
The beginning of the protests coincided with the anniversary of the country’s notorious former ruler Jean-Claude “Baby Doc” Duvalier fleeing after the fall of his regime.
Banks have been attacked, petrol stations set on fire and businesses across the country have reported they can’t function.
The protests, which began on 7 February, are demanding the resignation of Moise. But they also express a much deeper dissatisfaction with the government and the political system.
Protesters have already scored victories.
On Sunday prime minister Jean-Henry Ceant announced that “unnecessary privileges for high-level government officials, like allowances for gas and ­telephones, needless trips abroad, and the amount of consultants” were to be stripped away.
Such measures may not be enough to stem the tide of protest, although mainstream media sources are keen to claim they will.
Protester Valckensy Dessin expressed the deep anger millions of Haitian people feel when he told the Miami Herald newspaper, “We have a little minority, rich people in this country, running this country, earning everything.

“And we have the mass of the ­population dying, hungry, and misery like this.”
The PetroCaribe agreement at the heart of the scandal is between the Haitian state and ­oil-producing countries in the region such as Venezuela.
It allows the Haitian state to receive oil and pay for it within 25 years, meaning it can sell it to organisations inside the country. This is designed to enable the state to use the money to fund development projects.
But this has not happened. Emergency measures introduced after successive devastating hurricanes lifted restrictions on bidding processes for the oil.
This opened the door for bosses to stick their hand in the till.
Over £3 billion is missing. Banners on the protests include, “Give us the PetroCaribe money” and, “Where is the Petrocaribe money?”
The links between the Haitian state and those who have enriched themselves are complex but undeniable.
For instance, the firm Societe Generale d’Energie owes £134 ­million to the state.
Its chief executive founded the Haitian stock exchange. Its second in command described Haiti to French bosses as “27,750 square ­kilometres of opportunities to invest and make money”.
Haiti has been impoverished by outside powers and the local rich. This revolt gives a glimpse of the force that can bring change.
https://socialistworker.co.uk/art/47914/Rage+at+rule+of+the+rich+and+the+corrupt+hits+Haiti

2 thoughts on “Struggle in Haiti and Venezuela Connected”