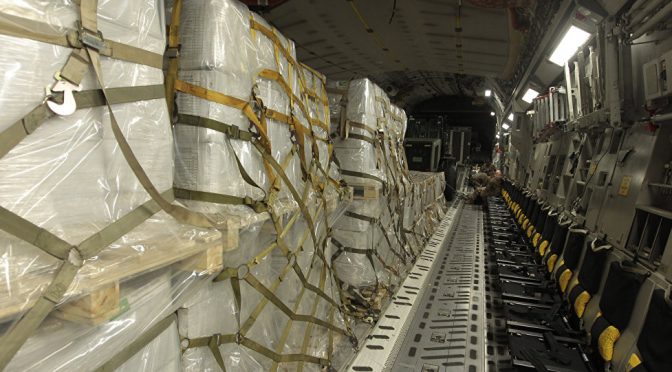 The latest attempt at initiating widespread indignation against a legitimate government in Venezuela is the false defection of “armed guards,” who rammed the barricades with armored vehicles at the border bridge separating the country from Colombia, without due regard to civilian safety.

VIDEO: Watch as three Venezuelan troops use their jeep to smash through a security barrier, on the Simon Bolivar bridge, as they desert to neighbouring Colombia pic.twitter.com/xNpbIv0yYo

#Breaking: The attackers got out of an armored vehicle and crossed the #border with weapons in their hands. Colombian authorities seemed to endorse this irregular behavior. A Venezuelan border police and a Chilean photographer were injured. #Venezuela #Colombia #HandsOffVenezuela pic.twitter.com/ZagAgTwXo7

This video (warning: violence and blood) shows the aftermath after 3 Colombia-backed Venezuelan guards hijacked 2 armored vehicles and slammed into the security barrier on the bridge.

You can see these coup-mongers injured a young girl, who is bleedingpic.twitter.com/66YYof3QAI

There were also Red Cross wearing White Helmets-type operatives that have embedded themselves with activists who are trying to smuggle undisclosed cargoes to aid the opposition, and for which the Red Cross Federation has protested.

We’ve learned that there are some people not affiliated w/ @cruzrojacol & @CruzRojaVe wearing Red Cross emblems at Colombia-#Venezuela & Brazil-Ven border.
We urge them to stop doing this. They might mean well but they risk jeopardizing our neutrality, impartiality & independence

So far, the Venezuelan military is not buying all of these acrobatics, having seen the experience of Middle Eastern countries that are now mired in violence and economic turmoil.
While the above false flag accomplished nothing but hurt civilians “on their side”, the so called “humanitarian aid” coming from the US were also damaged by the opposition’s own stupidity.

This video found by @graffitiborrao appears to show the moment when an opposition guarimbero throws a Molotov cocktail on a truck loaded with US aid: pic.twitter.com/Z4Bg6dL4BR

This video from today shows the guarimberos making Molotov cocktails. Did they use them to set the aid truck on fire? pic.twitter.com/aNFqGVQ0uA 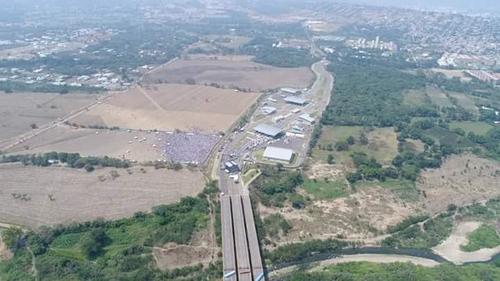 The stage was built at the top right across both roadways with its front towards the southwest. There was room for a few hundred VIP and reporters right in front of it. The field where the plebs were kept away lies between the north to south treeline at the right and the north to south ditch with the two single trees. According to the Google map scale the field’s northern edge is some 125 meters wide. The crowd was standing at the northern end of the field at a depth of about 50 meters. The density of the static crowd was low to medium with on average 2 to 3 people per square meter.
125m * 50m = 6,250 m2 * 2.5 people/m2 = 15,625 people
One may generously add a count of one or two thousand for the people mingling around in the back of the public area. In total there may have been up to 18,000, but certainly no more than 20,000 people at the concert. -Moon of Alabama

The motivation behind the latest CIA regime change efforts in Venezuela is to control the unextracted mineral resources of the country that would allow them to ride the rising tide of multipolarity around the globe, which includes the global reset to asset-backed currencies in trade and currency swap agreements.

What’s Not Being Said About the Venezuela Oil War

By F. William Engdahl
So far much of the discussion over what is driving the bizarre Trump Administration intervention into Venezuela centers around the comments of National Security Adviser John Bolton to claim it’s about oil. In a previous analysis we looked at the prospects of the huge Chavez Basin, formerly the Orinoco Basin, said to hold the world’s largest reserves of oil by some definitions. Now it’s becoming clearer that this de facto war is about far more than control of the heavy oil of the Chavez Basin in Venezuela.
First it’s important to look at which oil companies were already staking various claims on the region’s oil prospects. Within Venezuela, Chinese oil companies led by China National Petroleum Corporation, and the Chinese government have been playing a major role since the Chavez era. In fact the role has become so great Venezuela’s government owes China some $61 billion. Because of the financial problems of the Maduro government, China has been taking debt repayment in form of oil. Since 2010 the Russian state oil company, Rosneft has been involved in joint projects with the Venezuela state PDVSA, mainly in the Orinoco/Chavez Belt. Some years ago Rosneft extended some $6 billion in loans to Venezuela to be also repaid in oil. A recent statement from Rosneft says that $2.3 billion is due by end of this year. Rosneft has participation in five oil projects and 100 percent in a gas project. In addition to CNPC and Rosneft, France’s Total SA, Norway’s Equinor, and US Chevron all hold minority stakes in Venezuela projects, with most vowing to stay despite the political crisis. That raises the question what they know beyond the well-documented heavy oil of Venezuela.
The real prize?
The real prize that these powerful international oil giants are eyeing likely lies well to the east of the Orinoco heavy oil fields where they now operate. The real prize is the ultimate control over one of the best-kept secrets in the oil industry, the huge oil reserves of a disputed area straddling Venezuela, Guyana and Brazil. The region is called Guayana Esequiba. Some geologists believe the Esequiba region and its offshore could contain the world’s largest reserves of oil, oil of far better quality that the heavy Orinoco crude of Venezuela. The problem is that owing to the decades-long dispute between Venezuela and Guyana the true extent of that oil is not yet known.


Historically, both Venezuela and Guyana, a former British colony, laid claim to Esequiba. In 1983 a so-called Port of Spain Protocol, between the governments of Venezuela and Guyana, declared a 12-year moratorium on the Venezuelan reclamation of Esequiba to allow time for peaceful resolution. Since then a special UN Representative has kept the situation frozen. Neither party has developed exploration of the reported huge oil deposits in the territory. In January 2018 the UN Secretary General referred the status of Esequiba to the International Court of Justice in The Hague, where it sits today.
Now it gets messy. In September 2011 the government of Guyana filed for an extension of its offshore Exclusive Economic Zone to the UN Commission on the Limits of the Continental Shelf in order to extend its continental shelf by a further 150 nautical miles. To get UN permission, they declared the area was subject to no territorial disputes, ignoring the very active Venezuela dispute over Guayana Esequiba. Venezuela filed a strong protest. To further complicate the situation, Guyana awarded international oil exploration rights in the disputed maritime area.
Exxon in Guyana
In 2015 Guyana awarded an oil exploration contract to ExxonMobil, former company of former US Secretary of State Rex Tillerson. Exxon soon discovered an oil field estimated at 5 billion barrels, significant enough to change the economy of tiny Guyana once production begins next year. Unlike the heavy and expensive oil of Orinoco/Chavez, the oil found offshore Guyana is high quality, light. Oil analysts cite an astonishing 82% success rate for Exxon drilling in frontier areas compared with industry averages of 35%. Wood Mackenzies analysts say the offshore region “will easily become the fourth largest oil producing nation in Latin America by the next decade, with chances to outperform the countries preceding it. If Venezuela and Mexico fail to address production declines, Guyana could quickly surpass them to number two.”
Keep in mind until now this entire Esequiba region, offshore and on, had been off limits to oil exploration by mutual agreement of the countries. The Exxon Guyana discoveries confirmed the belief that the Esequiba region holds enormous oil resources.
Here enters the complication of Venezuela’s Maduro government and the bizarre declaration of opposition National Assembly President Juan Guaido to be deemed legitimate president. The entire tragic drama now unfolding can be better understood if we look beyond Orinoco Belt oil to the huge untapped potential reserves of Esequiba.
Since the 2015 Exxon finds, Venezuela has launched complaints with Guyana and on occasion interdicted Exxon oil exploration vessels. Complicating the situation for the Maduro regime is the fact that a partner of Exxon offshore Guyana in the disputed waters is the state oil company of Maduro’s largest creditor, China’s CNOOC.
Imagine a scenario where Maduro’s regime is replaced by a free-market Guaido who reopens Venezuela to foreign oil interests and reprivatizes the state PDVSA. Then Guaido, with help from his various international friends, aggressively asserts Venezuela’s claims to Esequiba. Britain, France and Spain, all with major oil companies in the region, have joined the US in recognizing Guaido as interim president. So long as Venezuela was controlled by Maduro, it suited Exxon and their backers in Washington to recognize Guyana’s legitimacy to the offshore Esequiba fields. Were Guaido to come in, that could easily change and a fragile Guyana could be arm-twisted to resolve the Esequiba issue to the benefit of Venezuela.
Right now we find Maduro with the open support of China and Russia, opposed by Guaido with the open backing of Washington, London, France, Brazil (also bordering on the Esequiba region) and others. Further adding to the explosive geopolitical cocktail of the region is the fact that China has formally incorporated Guyana into its Belt, Road Initiative and is building a highway link from Manaus in Northern Brazil through Guyana giving Brazil far more efficient access to the Panama Canal, cutting thousands of miles off the shipping route. Notable also are Chinese efforts in Panama, the central shipping crossing between Atlantic and Pacific Oceans. In 2016 China’s Landbridge Group bought Panama’s Margarita Island Port, the largest port, on the canal’s Atlantic side, giving the Chinese company intimate access to one of the most important goods distribution centers in the world.
It doesn’t take much imagination to realize that the geopolitical stakes in the Venezuela crisis go far beyond issues of legitimacy or democratic elections and far beyond the borders of Venezuela. And this is only the oil.
William Engdahl is strategic risk consultant and lecturer, he holds a degree in politics from Princeton University and is a best-selling author on oil and geopolitics, exclusively for the online magazine “New Eastern Outlook.”
https://journal-neo.org/2019/02/17/what-s-not-being-said-about-the-venezuela-oil-war/