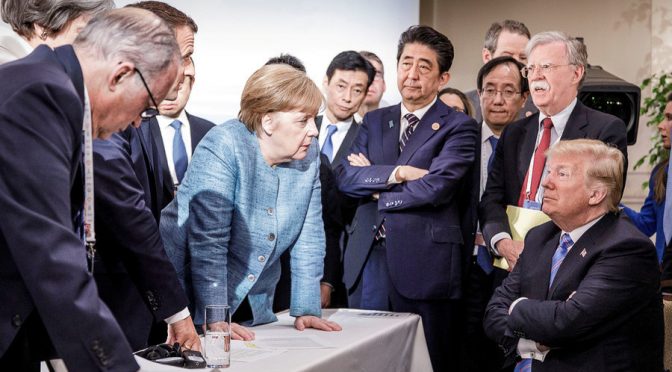 We discussed in the previous article how China and Russia are using diplomatic, economic and military means in areas like Asia and the Middle East to contain the belligerence and chaos unleashed by the United States. In this analysis, we will examine the extent to which this strategy is working in Europe. In the next and final article, we will look at the consequences of the “America First” doctrine in relation to South America and the Monroe Doctrine.
The United States has in the last three decades brought chaos and destruction to large parts of Europe, in spite of the common myth that the old continent has basked in the post-WWII peace of the American-led world order. This falsehood is fueled by European politicians devoted to the European Union and eager to justify and praise the European project. But history shows that the United States fueled or directed devastating wars on the European continent in Yugoslavia in the 1990s, with the conflict between Georgia and Ossetia at the beginning of the 1990s, with the war in Georgia in 2008, and in the coup in Ukraine in 2014, with the ensuing aggression against the Donbass.
The major problem for Washington’s European allies has always been summoning the will to contain US imperialism. For many years, especially since the end of the Cold War, European countries have preferred to defer to Washington’s positions, confirming their status as colonies rather than allies. It is fundamental to recognize that European politicians have always been at the service of Washington, eager to prostrate themselves to American exceptionalism, favoring US interests over European ones.
The wars on the European continent are a clear demonstration of how Washington used Europe to advance her own interests. The abiding goal of the neocons and the Washington establishment has been to deny any possibility of a rapprochement between Germany and Russia, something that could potentially result in a dangerous axis threatening Washington’s interests. The war of aggression against Yugoslavia represented the deathblow to the Soviet republics, an effort to banish the influence of Moscow on the continent. The subsequent war in Ossetia, Georgia and Ukraine had the double objective of attacking and weakening the Russian Federation as well as creating a hostile climate for Moscow in Europe, limiting economic and diplomatic contacts between East and West.
In recent years, especially following the coup in Ukraine, the return of Crimea to the Russian Federation, and Kiev’s terrorist action against the Donbass, relations between Russia and the West have deteriorated to historically low levels.
The election of Trump has sent confusing signals to the Europeans vis-a-vis Russia. Initially Trump seemed intent on establishing good relations with Putin in the face of strong opposition from European allies like France, Germany and the UK. But the possibility of a US-Russia rapprochement has been severely undermined by a combination of Trump’s inexperience, the unhelpful advisors he has appointed, and the US deep state. This geopolitical upheaval has had two primary consequences. For the Germans, first and foremost, it has deepened energy and economic cooperation with Moscow, especially in relation to the Nord Stream 2. But on the other hand, Trump has found friends in European countries hostile to Russia like Poland.

8 thoughts on “Final Steps of the Multipolar Revolution”