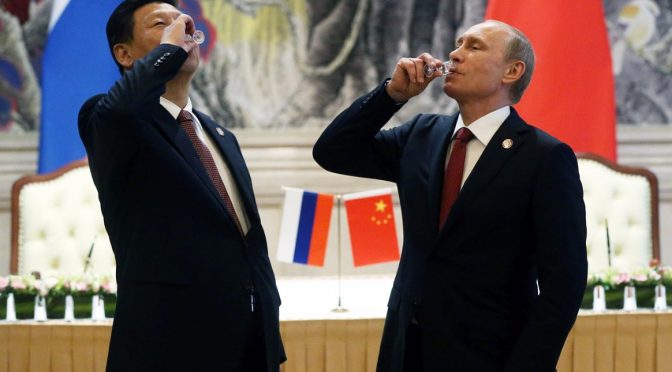 Fortunately the world today is very different from that of 2003, Washington’s decrees are less effective in determining the world order. But in spite of this new, more balanced division of power amongst several powers, Washington appears ever more aggressive towards allies and enemies alike, regardless of which US president is in office.
China and Russia are leading this historic transition while being careful to avoid direct war with the United States. To succeed in this endeavor, they use a hybrid strategy involving diplomacy, military support to allies, and economic guarantees to countries under Washington’s attack.
The United States considers the whole planet its playground. Its military and political doctrine is based on the concept of liberal hegemony, as explained by political scientist John Mearsheimer. This imperialistic attitude has, over time, created a coordinated and semi-official front of countries resisting this liberal hegemony. The recent events in Venezuela indicate why cooperation between these counter-hegemonic countries is essential to accelerating the transition from a unipolar to a multipolar reality, where the damage US imperialism is able to bring about is diminished.

Moscow and Beijing lead the world by hindering Washington

From the Middle East to Asia

Beijing has focussed in Asia on the diplomatic field, facilitating talks between North and South Korea, accelerating the internal dialogue on the peninsula, thereby excluding external actors like the United States (who only have the intention of sabotaging the talks). Beijing’s military component has also played an important role, although never used directly as the Russian Federation did in Syria. Washington’s options vis-a-vis the Korean peninsular were strongly limited by the fact that bordering the DPRK were huge nuclear and conventional forces, that is to say, the deterrence offered by Russia and China. The combined military power of the DPRK, Russia and China made any hypothetical invasion and bombing of Pyongyang an impractical option for the United States.
As in the past, the economic lifeline extended to Pyongyang by Moscow and Beijing proved to be decisive in limiting the effects of the embargo and the complete financial war that Washington had declared on North Korea. Beijing and Moscow’s skilled diplomatic work with Seoul produced an effect similar to that of Turkey in the Middle East, with South Korea slowly seeming to drift towards the multipolar world offered by Russia and China, with important economic implications and prospects for unification of the peninsula.
Russia and China – through a combination of playing a clever game of diplomacy, military deterrence, and offering to the Korean peninsula the prospect of economic investment through the BRI – have managed to frustrate Washington’s efforts to unleash chaos on their borders via the Korean peninsula.
The United States seems to be losing its imperialistic mojo most significantly in Asia and the Middle East, not only militarily but also diplomatically and economically.
The situation is different in Europe and Venezuela, two geographical areas where Washington still enjoys greater geopolitical weight than in Asia and the Middle East. In both cases, the effectiveness of the two Sino-Russian resistance – in military, economic and diplomatic terms – is more limited, for different reasons. This situation, in line with the principle of America First and the return to the Monroe doctrine, will be the subject of the next article.
The original source of this article is Strategic Culture Foundation. Copyright © Federico Pieraccini, Strategic Culture Foundation, 2019