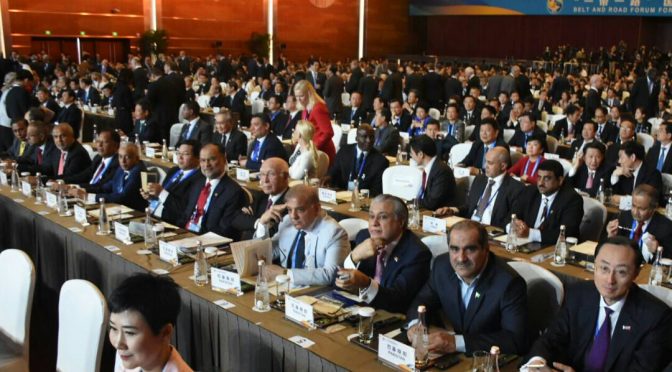 We’ve been told that there must only be a singular force that will guide and set humanity’s path towards the future, or we all perish. The concept of exceptionalism, in parallel with unregulated monopoly, has run its natural course and look how backward we still are.
In contrast, the rapid expansion of railway transport systems across Eurasia has significantly changed the tribal mindset of the population there, so much so that they are now looking up to how and what products they could sell the global market with, rather than be forever stuck in the limited potential of their own domestic patrons.
The free access to information, and the free flowing conversation in social networks, have brought down the exceptionalist narrative that “white is good and colored is bad.”
Now, the Western population is beginning to appreciate the different cultures in Asia and realize how much they all share the same aspirations and dreams for a better world.
Those same aspirations that run counter to their own governments’ foreign and domestic policies.

No One Trusts the US Government, Not Even the American People

By Dr. Paul Craig Roberts | Global Research, February 24, 2019
Atlantic Bridge, a German front organization set up by Washington to propagandize Germans to serve Washington, has failed in the job.  The latest survey conducted by the front group shows that 85% of Germans are alienated from the US.  The front group’s chairman acknowledged “the great lost of trust in the United States.”  By a margin of two to one, Germans see China as a more reliable partner for Germany than the US. (See this)
Americans have come to the same conclusion about the US government as have Germans.  The latest Gallup Poll reveals that Americans regard America’s top problem to be the US government.  Twice as many respondents regard the US government to be the top problem than regard immigration, and Americans see Washington to be six times the problem that health care is.
As many have concluded, the United States is not a democracy. It is an oligarchy ruled by monied private interest groups. (See this)
There has clearly been a revolution in America.  An aristocracy has overthrown the people. Democracy is dead.  We live in the Oligarchy United Against the People.
This article was originally published on the author’s blog site: Paul Craig Roberts Institute for Political Economy.

The deteriorating influence of Western diplomacy is not being observed only in countries like Iraq, Afghanistan, Libya, and other countries in the Middle East that were all recipients of the “War of Terror,” but also in India and Pakistan, two neighbors that are being pushed to war once again by the merchants of death solely for profit in arms sales and subsequent exploitation of their natural resources, because 50 tons of Syrian gold is simply not enough.

All told, it’s nothing short of a game-changing geopolitical development that Russia would offer to host peace talks between India and Pakistan because it proves just how wildly successful President Putin’s “balancing” strategy has been thus far, considering how confident Moscow is that it can constructively apply this model to the two nuclear-armed Great Powers in South Asia. Russia has truly returned to the region and is poised to play an even larger role in it over the coming years, which will enable Moscow to more assertively counter the US’ plans to destabilize South Asia and therefore ensure the success of the emerging Multipolar World Order.
This article was originally published on Eurasia Future.
Andrew Korybko is an American Moscow-based political analyst specializing in the relationship between the US strategy in Afro-Eurasia, China’s One Belt One Road global vision of New Silk Road connectivity, and Hybrid Warfare.

It’s no wonder that the Foreign Minister of Venezuela, Jorge Arreaza has been using the UN platform to voice the truth on the ground and destroy the black propaganda coming from the Western media. The UN General Assembly itself is now headed by a reformist.
Hailed as the “best Prime Minister for 30 years” by his own people, Portuguese UN Sec. Gen. Antonio Guterres made it a point early on to “Let us resolve to put peace first,” in 2017.
Guterres was elected to the position at “the first time candidates for Secretary-General had to present their platform in public hearings in the UN General Assembly, a process during which Guterres emerged as a much stronger candidate than had been initially expected, given that he fit the bill on neither the gender nor the geographic scores.”
The prevailing pragmatic mindset in the US leadership is working positively for Venezuela…

By Carla Stea Global Research, March 01, 2019
In a herculean effort to prevent war, and protect the integrity of his country, Venezuelan Foreign Minister Jorge Arreaza held a breathtaking schedule of events at the United Nations, including a meeting with the Secretary-General, consultations with the envoys of 60 member states supporting Venezuela’s sovereignty,  a press conference the evening of February 22, speaking at a Security Council meeting February 26,  and presenting an address at the UN Human Rights Council in Geneva on February 27.
Arreaza’s encyclopedic knowledge of history is one of his powerful assets, as he patiently clarified to reporters, at last Friday’s press conference, the reality of US instigated economic warfare underlying Venezuela’s current crisis.  At one bizarre moment, a European reporter, asked, Mussolini-style, about a report that Venezuelan armed forces shot an unarmed indigenous person, and compared the incident to “what happened in China.” Arreaza asked whether the reporter had seen the incident, and, evading Arreaza’s question the reporter continued:  “Is your government giving specific orders to shoot unarmed people, and what will happen to those who refuse to comply with these orders?”  The stupefying question, less a query, and more unsubstantiated innuendo, was asked with such arrogance and grandiosity that Arreaza, fully aware of the insinuation intended, replied:
“Your question is full of venom and very poisonous. The army of Bolivar has never had orders to fire on the civilian population, and you should be the first to assess the reliability of false ‘reports,’ and false flag operations. It is your responsibility as a reporter to be smart, astute, and delve into the truth, and recognize propaganda.”
What was unmistakable, throughout last week, and at yesterday’s Security Council meeting, is Arreaza’s passionate effort to prevent the bloodbath of military confrontation, reiterating the historic context of the Venezuelan crisis to reporters and diplomats who may have a stunted recognition of  the barbarous – but often ingenious – methods used by Washington to impose domination and de facto slavery on nations in Latin America.  Theirs is virtually a scientific formula – economic destabilization, a relentless media disinformation campaign, and if the current target – in this case Venezuela – does not submit to domination, ultimately military force will be decisive in inflicting regime change, installing a docile, subservient puppet.  The horrific example of the overthrow of Allende in Chile is merely one example.
… The Wall Street Journal on February 25, 2019 headlined: “Maduro’s Opposition Urges Military Force in Venezuela,” making inescapable that the Venezuelan opposition is either lobotomized, or heedless of the bloodbath military action will culminate in.  The New York Times on February 25, page 4, has a large photograph of “innocent, unarmed” protesters preparing Molotov cocktails on Sunday along the Venezuela-Colombia border.
The Security Council meeting Monday, February 25, was preceded by an asinine lineup of eight members of the European Union, demanding that Venezuela immediately call elections. Evidently ignorant of the fact that former U.S. President Jimmy Carter characterized the Venezuelan electoral process as “one of the best in the world,” and the US electoral process as “one of the worst,”  these European proxies were better suited to comic parody in a Mozart opera than to intervention in matters of war and peace.  And, of course, who is to determine that, even if new elections are called, they will be either free or fair.  Obviously, the result will be as Washington directs its European colonies to approve.
It would not be possible to avoid reference to Marco Rubio’s gruesome tweet, threatening Maduro, and not incidentally Kim Jong Un, with hideous death by torture, including sodomization with bayonets before his murder.  These horrific actions were committed by those “vulnerable, peaceful Libyans” for whom the UN Security Council, enacting Resolution 1973 and “Responsibity to Protect,” in the unforgettable words of Indian Ambassador Puri, were authorized to “bomb the hell out of Libya.”  It is very likely that the Venezuelan opposition, especially those thugs,  photographed by The New York Times on February 23 preparing Molotov cocktails, are the same breed as those Libyan monsters who, among other tortures, sodomized President Khadaffi with a bayonet before murdering him.  No doubt Kim Jong Un will duly note this threat, and perhaps Maduro will ponder Khadafi’s mistake in surrendering his nuclear program.
Today’s Security Council meeting, with the failure of both the US and Russian drafts, included Elliot Abrams regurgitating the same dangerous and deadly platitudes as always. The double veto of the US draft, by both China and Russia, saved the Security Council from endorsing another catastrophic military intervention.
Carla Stea is Global Research’s correspondent at United Nations Headquarters, New York, N.Y.
https://www.globalresearch.ca/venezuela-arreaza-un-guaido-military-intervention-war/5670110

All of the above are reasons to be hopeful about our shared future.
This planet is not losing all its Good Men yet. But we have to do our part to appreciate what they’ve done so far, and to continue exposing the Deep State high crimes everywhere, so we can proactively prevent new ones from occurring.