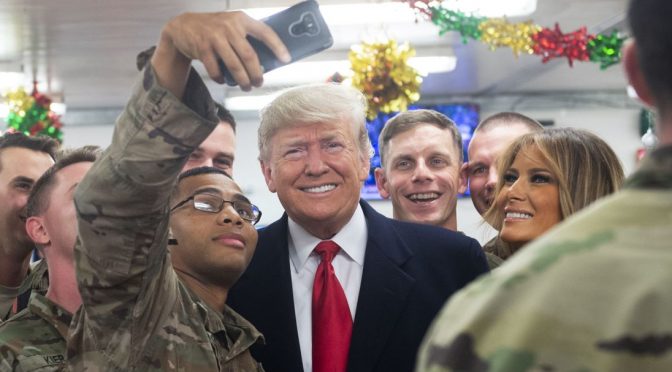 In the last 24 hours, the Trump administration has intensified its attacks on Turkey which has significantly strained relations and increased the prospect of a military confrontation. The present situation is extremely tense and could explode without warning and without the American people having any idea of the dramatic events that preceded the clash.

As often happens, the western media has peppered over Washington’s provocations and failed to provide adequate coverage of the latest developments. With that in mind, here’s a quick recap.

Washington’s first incitement took place on Monday in the form of an attack on the Turkish economy. This is from the Daily Sabah:

(Turkish) Trade Minister Ruhsar Pekcan criticized the move on her official Twitter account and highlighted that removal of Turkey from the GSP program is contradictory to the target of $75 billion in bilateral trade, a mutually agreed goal. “We still would like to pursue our target of increasing our bilateral trade with the U.S. who we see as our strategic partner, without losing any momentum,” she said and added, “This decision will also create repercussions for small and medium-sized enterprises in the U.S.”…(The Daily Sabah)

“I am taking this step because I think that Turkey should not be on the list of developing countries benefiting from GSP based on its level of economic development.”

But this is clearly not the case. Washington routinely violates WTO regulations to punish nations that fail to comply with its diktats. In this case, Turkey has made a number of decisions that have clearly angered Washington triggering the punitive response. In truth, the removal of preferential status has more to do with Turkey’s purchase of Russian anti aircraft batteries (S-400) than it does with economic development. In other words, the decision is purely political.

As for Turkey’s decision to buy Russia’s S-400 surface-to-air missile defense systems, that has been a bone of contention for some time now. On Tuesday, the friction between the two countries escalated dramatically when “The top U.S. general in Europe said that he would recommend that the United States not sell Lockheed Martin Corp F-35 jets to its NATO ally Turkey if Ankara does not drop its plans to buy S-400 defense systems from Russia.” His statement was followed by a similar threat from the US State Department which said that trading with Moscow would have dire consequences in the future.

“We’ve clearly warned Turkey that its potential acquisition of the (Russian) S-400 (air defense system) will result in a reassessment of Turkey’s participation in the F-35 program and risk other potential future arm transfers to Turkey,” State Department spokesman Robert Palladino told a briefing.

Later in the day, a report surfaced that “First Lady Melania Trump visited a charter school operated by the Gülenist Terror Group (FETÖ) in Tulsa, Oklahoma.” According to the Turkish daily: “(Melania) Trump paid a visit to the Dove School of Discovery during her anti-bullying “Be Best” initiative.

When was the last time that Melania Trump was featured on headline news?

Never, which is what made the report so surprising. Of course, it’s not surprising at all if one realizes that Melania was being used for political purposes. Then it all makes sense. The First Lady was providing a bludgeon for pummeling Turkey, that’s what her visit was really all about. Keep in mind, the vast majority of Turks believe that the founder of the charter schools Melania visited is the coup leader who tried to topple Turkish president Recep Tayyip Erdogan in 2016. Here’s a bit of background from the Daily Sabah:

“Residing in Pennsylvania since 1999, FETÖ’s ringleader Fetullah Gülen is known as the man who controls around 140 charter schools and $500 million annually from the U.S. government, according to some U.S. media reports…..

FETÖ’s infiltrators in the military, from generals to low-ranking officers, were behind the coup attempt on July 15, 2016, that killed 250 people, and Turkey has already sent a large cache of evidence to U.S. officials implicating FETÖ in the attempt.

The United States’ apparent reluctance to extradite Gülen, one of the most wanted people in Turkey, remains a deep rift in relations between the two countries. Ankara formally requested Gülen be extradited on July 19, 2016.” (“Melania Trump visits FETÖ charter school in US”, Daily Sabah)

Gülen will never be extradited even though Turkey has extradited a number of alleged terrorists the US wanted. Why? Because Gülen’s connections to the intelligence community remain highly suggestive. Many think he is a CIA asset, which means that Turkey will never get their hands on him no matter what.

In any event, Melania’s appearance was clearly orchestrated to slap Turkey in the face and show them who’s boss. She is merely an unwitting pawn in the operation.

Also on Tuesday, Turkish Defense Minister Hulusi Akar met with U.S. special envoy for Syria, James Jeffrey, in Ankara. “During the meeting, the two officials discussed the latest developments in Syria, focusing on the Manbij roadmap and the situation in the east of the Euphrates.

The coordination on the U.S. pullout from Syria, strategies for a post-U.S. period in the northern parts of the country controlled by the PKK terrorist group’s Syrian offshoot the People’s Protection Units (YPG), (and) the fight against PKK and Daesh, implementation of the Manbij road map.”

The Turkish leadership is still operating on the assumption that Donald Trump was sincere in his promise to remove all US troops from Syria and to fulfill his commitments under the terms of the Manbij roadmap. Those commitments–according to Reuters– require “the clearing of Manbij of all terror organizations and the permanent instatement of safety and stability…In the first step, the determination of parameters for common plans for the removal of YPG-PYD from Manbij – you can also call it PKK – will be determined.”

In short, Turkey expects Trump to keep his word, help remove the militant-proxies from the area, assist in the transition of US Special Forces and Kurdish militants to members of the Turkish Army, and help to create a safe zone that will be overseen by Turkey. And while Turkey has no more legal right to occupy Syrian sovereign territory than the US, this is the deal that Trump agreed to in his conversations with Erdogan in December. In fact, this is the deal that Turkey has insisted upon dating back to 2012. They haven’t changed their position at all, it’s only the United States that keeps vacillating.

Tuesday, provided a prime example of how fickle US policy can really be. Readers might recall how Trump announced the complete withdrawal of U.S. forces from Syria in a video in December. He said:

“We have won against ISIS….Our boys, our young women, our men — they’re all coming back, and they’re coming back now.”

Yesterday, Trump did a complete about-face saying he now agrees “100%” with the plan to maintain a permanent military presence in Syria. He added,

“We seek to ensure that all of the gains made in Syria are not lost, that ISIS never returns, that Iran is not emboldened, and that we consolidate our gains” ahead of potential political negotiations.”

Naturally, Erdogan was never consulted on the matter nor were Turkey’s national security concerns taken into consideration. Is Turkey supposed to meekly accept (what they see as) a “terrorist corridor” on their southern flank or the emergence of an independent Kurdish state at the center of the Arab world? And yet this is exactly what Trump’s announcement suggests, which is why it’s so shocking and provocative.

So how is Erdogan going to respond to this humiliation? Will he simply suck it up and submit to Washington’s redrawing of Syria to suit its own geopolitical objectives or will he order his army (that has been massed on the southern border for months) to invade Syria, remove the YPG from Manbij, and implement his own ambitious refugee resettlement plan? What’s he going to do?

It’s hard to say but, as you can see, we are at a dangerous crossroads for US-Turkish relations which is further complicated by the fact that Erdogan has no good choices. If he sends his troops into battle, he will be locking horns with the US military. And if he doesn’t, he will have to accept the new status quo, which is, a hostile Kurdish state–that is armed and supported by Washington– on his southern border. Is Erdogan prepared to accept that new reality?

Let’s not forget that on December 12, 2018, (just days before Trump told Erdogan he would remove all US troops from Syria) Erdogan announced his plan to invade Syria regardless of the risks it posed to US military personnel. Here’s a recap from an article at the Guardian:

“The Turkish president, Recep Tayyip Erdoğan, has said that Turkey will launch a military operation against the Kurds in northern Syria within days, in a decision that could signal a shift in Turkish-US relations and have far-reaching consequences for Syria’s future.

Long frustrated by US support for Kurdish militias that Turkey views as terrorists, Erdoğan has threatened to push deeper into north-eastern Syria since sending Turkish forces into the Kurdish enclave of Afrin in February.

The president said during a televised speech in Ankara on Wednesday that the operation was imminent. “We will begin our operation to free the east of the Euphrates [river] from the separatist organization within a few days,” he told MPs. “Our target is not the American soldiers – it is the terror organizations that are active in the region.”

Erdoğan also expressed disappointment that US-backed Kurdish fighters in Syria had not left the town of Manbij, as agreed in a US-Turkish deal brokered this year. “The Americans are not being honest; they are still not removing terrorists [from Manbij],” he said. “Therefore, we will do it.”(“Turkey primed to start offensive against US-backed Kurds in Syria”, The Guardian).

The Trump administration has created the one situation on the ground that Turkey will not tolerate. Perhaps, that’s why the Pentagon has beefed up its deployment to 3,000 troops. (The DOD has added 1,000 troops since Trump made his “withdrawal” announcement). Maybe Trump’s neocon advisors secretly want Turkey to invade Syria thinking that the scenario will be similar to Saddam’s ill-fated invasion of Kuwait. Is that what’s going on or is Washington just so used to giving orders, they expect Erdogan to simply click his heels and obey?

Whatever the thinking may be, the glaring shortcomings of the strategy should be obvious. The Trump administration is forcing a confrontation that could quickly escalate into a major regional war. It’s a recipe for disaster.

Mike Whitney is a frequent contributor to Global Research. This article was originally published on The Unz Review.