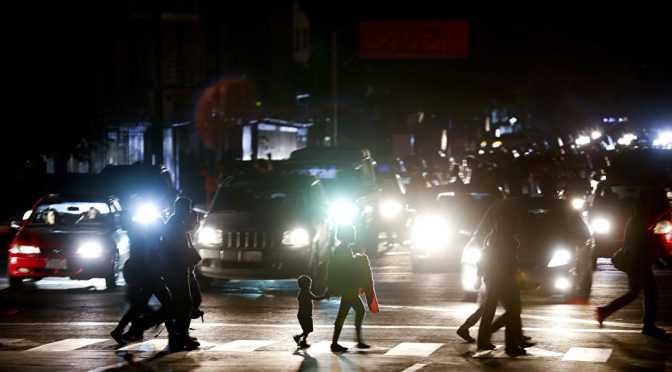 The Deep State’s desperate attack on Venezuela’s power grid was far more extensive than previously thought. This is a textbook regime change strategy to plunge Venezuela into darkness and chaos, on top of the multiple economic and political sanctions that the country has been subjected to for years, to push the people to topple their own legitimately elected authorities in favor of a puppet government.

Some key US politicians already knew about the attacks as they happened.

ALERT: Reports of a complete power outage all across #Venezuela at this moment.

18 of 23 states & the capital district are currently facing complete blackouts.

The lights are going off on the Maduro mafia in Venezuela… https://t.co/SU9QONDY8E

Shame on those who are taking no action while there government is rampaging once again for plunder and corporate profit, in broad daylight.

On Thursday, Venezuela’s Guri dam hydroelectric power plant was cyberattacked at 5:00 PM during the late afternoon rush hour to cause maximum disruption.

Up to 80% of the country was affected, damage done more severe than initially thought. Weeks or months of planning likely preceded what happened – US behind it? Considerable expertise needed to pull it off.

On Friday, another cyberattack occurred, followed by a third one on Saturday, affecting parts of the country where power was restored, further complicating resolution of the problem, Maduro saying:

After power was restored to about 70% of the country, “we received another attack, of a cybernetic nature, at midday…that disturbed the reconnection process and knocked out everything that had been achieved until noon,” adding:

“(O)ne of the sources of generation that was working perfectly” was sabotaged again… infiltrators… attacking the electric company from the inside.”

What’s happening in Venezuela is similar to infecting Iran’s Bushehr and Natanz nuclear power facilities with a Stuxnet malware computer virus in 2010, a likely joint US/Israeli intelligence operation. Edward Snowden blamed them for what happened.

At the time, operations were halted indefinitely. Iran called the incident a hostile act. General Gholam-Reza Jalali said if the affected facilities went online infected, Iran’s entire electrical power grid could have been shut down.

It took months to fully resolve the problem. Following the summer 2010 attack, the malware continued to infect the facilities’ centrifuges, requiring their replacement.

An Institute for Science and International Security analysis said

“Iran likely cleaned the malware from its control systems. To prevent re-infection, Iran will have to exercise special caution since so many computers in Iran contain Stuxnet,” adding:

“Although Stuxnet appears to be designed to destroy centrifuges at (Iranian nuclear facilities), destruction was by no means total.”

“Stuxnet did not lower the production of low-enriched uranium (LEU) during 2010. LEU quantities could have certainly been greater, and Stuxnet could be an important part of the reason why they did not increase significantly.”

“(T)here remain important questions about why Stuxnet destroyed only 1,000 centrifuges. One observation is that it may be harder to destroy centrifuges by use of cyber attacks than often believed.”

“(a)n electronic war has been launched against Iran… This computer worm is designed to transfer data about production lines from our industrial plants to locations outside Iran.”

“(t)he attack is still ongoing and new versions of this virus are spreading,” adding:

“We had anticipated that we could root out the virus within one to two months, but the virus is not stable, and since we started the cleanup process three new versions of it have been spreading.”

If malware similar to Stuxnet was used against Venezuela’s power grid, the problem could linger for months, parts of the country continued to be affected by outages for some time.

It can also identify the attack’s source and lay blame where it belongs – the US most likely responsible. It clearly has motive, opportunity and expertise – waging war on Venezuela by other means to topple its government and gain another imperial trophy.

If the malware infection is widespread, continued outages may happen until the problem is fully resolved.

Resolution may take months, disruption in the country persisting, clearly the motive behind the attack.

Award-winning author Stephen Lendman lives in Chicago. He is a Research Associate of the Centre for Research on Globalization (CRG). Visit his blog site at sjlendman.blogspot.com.

The Venezuelan government has now issued an ultimatum for all Deep State operatives posing as US diplomats, who might have actually injected the virus into the power grid, to leave the country within 72 hours.

US diplomats are undermining Venezuelan peace and stability, the nation’s Foreign Minister Jorge Arreaza said, setting a deadline for them to vacate the embassy in Caracas. Washington vowed to hurry the evacuation of its mission.

American diplomats must “abandon Venezuelan territory in the next 72 hours,” with the countdown starting at the “zero hour” on Tuesday, Arreaza wrote on Twitter.

Official Communiqué on the decision by the Bolivarian Government of Venezuela terminating the conversations with the US for the establishment of interest sections. The US diplomatic personnel must abandon Venezuelan territory in the next 72 hours: pic.twitter.com/FTPnXiFqU1