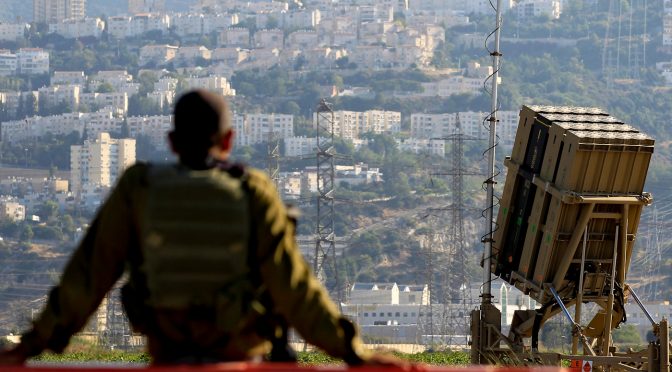 While the US population are fully entertained and distracted by the all too predictable conclusion of the Mueller Investigations regarding the supposed Trump-Putin collusion during the 2016 presidential election, a new bill was filed behind the scenes for an operation to transfer one of the more exotic destructive technologies of our time, i.e. directed high energy weaponry that includes laser and particle beam systems.

We’ve already seen how these Tesla technologies work during the California Wildfire, late last year. Now, they want to give it to Israel with US taxpayers’ subsidy.

The U.S.-Israel Directed Energy Cooperation Act would deepen Israel’s access to grotesque weapons of war that have been developed by the U.S. military but have also been banned for use by American troops.

WASHINGTON — Last Thursday, Reps. Ted Lieu (D-CA) and Elise Stefanik (R-NY) introduced the “U.S.-Israel Directed Energy Cooperation Act,” which would authorize “the Department of Defense to carry out bilateral cooperation with Israel to develop directed energy capabilities,” according to a press release.

Directed energy weapons include laser weapons and particle beams; they are highly destructive but embraced by militaries for their “infinite magazines” and “incredible speed and range.”

More specifically, the bill — which is identical to a bill of the same name that Lieu and Stefanik introduced last year but failed to pass — would allow the Pentagon “to carry out research, development, test, and evaluation activities, on a joint basis with Israel, to establish directed energy capabilities that address threats to the United States, deployed forces of the United States, or Israel, and for other purposes.”

Arguably more troubling is the fact that this bill would deepen Israel’s access to grotesque weapons of war that have been developed by the U.S. military but have also been banned for use by American troops. For instance, in the late 1990s, the U.S. and Israel collaborated on the “Nautilus” program that created lasers that cause permanent blindness in those targeted by literally “melting the eyeball.”

Though the “Nautilus” lasers were banned for use by the U.S. under the Clinton administration because they could cause permanent blindness, they were nevertheless shared with Israel’s government. A spokesman for U.S. Army Space and Strategic Defense Command, John Cunningham, at the time told the Washington Report on Middle Eastern Affairs that the decision to share the technology with Israel had not been made by the command — which was the lead agency overseeing the program — and instead stated that “We are taking our orders from the Secretary of Defense [William Perry] and President Clinton.”

The “Nautilus” lasers were later shelved for use as missile defense by Israel in 2006, despite the U.S. and Israel having spent $300 million, owing to the “prohibitive cost” of their operation. However, Israel has continued to use the highly experimental technology to develop a new system it claimed was on the “verge of completion” this past December.

In light of this current bill, it is important to revisit the “Nautilus” example, as it clearly shows that the U.S. government, in past “collaborative” efforts, has provided experimental, hi-tech weapons to Israel even when they are so controversial, potent and deadly that the U.S.’ own military is banned from using them. This point is even more troubling when one considers that Israel regularly tests its experimental and newly developed weapons on Palestinians, including civilians, who live in the blockaded Gaza Strip and the occupied West Bank.

For instance, the bill states: “The Secretary of Defense is authorized to provide maintenance and sustainment support to Israel for the directed energy capabilities research, development, test, and evaluation activities authorized.” It then states that Israel’s financial contribution to said research would not necessarily need to be equal to the U.S.’ contribution, but merely “an amount that otherwise meets the best efforts of Israel, as mutually agreed to by the United States and Israel.”

Furthermore, the “memorandum of agreement” between the two countries states that the bill would require “the United States Government to receive semiannual reports on expenditure of funds, if any, by the Government of Israel, including a description of what the funds have been used for, when funds were expended, and an identification of entities that expended the funds.” This passage strongly suggests that the research will take place in Israel under Israeli government supervision.

The bill is part of a recent congressional effort to mandate close cooperation between the Israeli and U.S. governments in sensitive technology, despite Israel’s history of using such collaboration to steal state secrets. For instance, a widely overlooked provision of the United States-Israel Security Assistance Authorization Act of 2018 — which was nearly passed but ultimately blocked last year in the Senate by Rand Paul (R-KY) — would have mandated that the National Aeronautics and Space Administration (NASA) work closely with the Israel Space Agency (ISA) “to identify and cooperatively pursue peaceful space exploration and science initiatives in areas of mutual interest.”

The provision was included despite the fact that an Israeli postdoctoral student, Amir Gat, at Caltech had illegally transmitted to Israel classified information on NASA technology. Gat is now employed by an Israeli state-run research institution.

This current bill appears not to provide any direct benefit to the United States and, instead, promises to be a way of subsidizing hi-tech weapons research of an allied government that regularly commits war crimes. Though Rep. Lieu has claimed that the legislation is an “opportunity” for the U.S. and would “save lives,” it seems that the $31,850 Lieu received from the pro-Israel lobby just last year may have swayed his opinion.

Yet, in contrast, the bill’s other sponsor, Rep. Stefanik, has not received such largesse from the Israel lobby. Instead, Stefanik is connected with and used to work for the country’s most notorious and zealously pro-Israel neoconservatives, when she served as communications director for the Foreign Policy Initiative (FPI). FPI was founded in 2009 by neoconservatives Robert Kagan and Bill Kristol as the successor to the Project for a New American Century (PNAC), which had fallen into disrepute for its role in promoting — and some argue helping to plan — the Iraq War. Yet, Stefanik’s association with neoconservatives goes beyond her association with FPI, as neocon National Security Adviser John Bolton endorsed her re-election campaign bid in 2017.

Given the lack of benefit for the U.S. — and Israel’s history of war crimes and testing its newly developed weapons on disenfranchised Palestinians in blockaded Gaza or the occupied West Bank — this bill is a perfect example of yet another “Israel first” bill now making its way through the U.S. Congress.