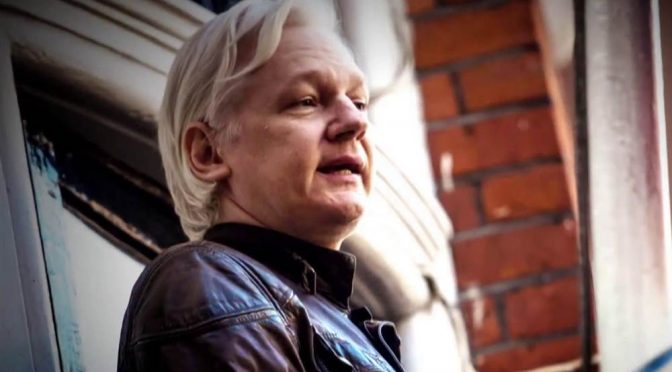 Threatening Wikileaks founder Julian Assange with UK US extradition is not just to silence the journalist but also to remind us that the Criminal Cabal is still in power and that we need to thread very carefully.

BREAKING: A high level source within the Ecuadorian state has told @WikiLeaks that Julian Assange will be expelled within "hours to days" using the #INAPapers offshore scandal as a pretext–and that it already has an agreement with the UK for his arrest.https://t.co/adnJph79wq

Reports surfaced months ago, suggesting Moreno might collude with the US and UK on Assange – ignoring his citizenship rights, along with revoking his asylum granted him in Ecuador’s London embassy by President Rafael  Correa in August 2012.

On Tuesday, Moreno falsely accused Assange of “repeatedly violat(ing) the conditions of his asylum,” suggesting he’ll revoke his asylum, hand him over to UK authorities, followed by extradition to the US.

Moreno lied claiming Assange “hack(ed) private accounts (and) phones.” The phony accusation relates to a WikiLeaks tweet about what’s referred to in Ecuador as the INA Papers.

In March, information from Moreno’s cell phone and gmail account sent to an opposition lawmaker was published online, the material called the INA Papers, allegedly implicating Moreno, his brother, and close associates in an offshore corruption scandal, involving perjury and money laundering.

“(i)n WikiLeaks we have seen evidence of spying, intervention in private conversations on phones, including photos of my bedroom, of what I eat, of how my wife and daughters and friends dance.”

He accused Correa of spying on him by planting a hidden camera in the wall of his presidential office. Correa called the charge absurd.

WikiLeaks didn’t publish the INA Papers. Pressured by Washington and Britain, Moreno has been seeking an easy way to justify revocation of Assange’s asylum. He provided no evidence supporting his charges because none exists.

Assange is a political refugee – granted Ecuadorian citizenship and given asylum in the country’s London embassy by former President Correa.

Under international law, refugees and asylum seekers are protected.

Article I of the 1951 UN Convention Relating to the Status of Refugees calls them:

“(P)ersons who owing to a well-founded fear of being persecuted for reasons of race, religion, nationality, membership of a particular social group or political opinion, (are) outside the country of their nationality, and (are) unable to or, owing to such fear, (are) unwilling to avail (themselves) of the protection of that country.”

Post-WW II, the UN High Commissioner for Refugees (UNHCR) was established to help them. To gain legal protection, they must:

Assange clearly qualifies on all of the above, entitled to political asylum by Ecuador as a citizen of the country.

Expulsion from its London embassy would be a flagrant violation of international law, unjustifiably justified by baseless charges.

Assange is an investigative journalist/whistleblower, publishing material supplied by sources believed to be credible, unidentified for their protection.

WikiLeaks is not an intelligence operation. Nor it it connected to Russia or any other country. Claims otherwise are fabricated.

Assange earlier explained that WikiLeaks has the right “to publish newsworthy content. Consistent with the US Constitution, we publish material that we can confirm to be true…”

US regimes are at war on individuals who reveal dirty secrets about the imperial state – notably its high crimes of war, against humanity, and other serious wrongdoing.

It’s information everyone has a right to know, providing it a vital public service, heroism above and beyond the call of duty, warranting high praise – nearly always with no monetary compensation. Doing the right thing is its own reward.

The Obama regime prosecuted more whistleblowers doing their job honorably than all his predecessors combined.

Trump hardliners consider leaking vital information everyone has a right to know a threat to national security which it’s not.

Since the 1970s, Congress repeatedly affirmed the right of civil servants to report what they believe are abuses of power, government corruption, rule of law violations, dangers to public health and safety, as well as other wrongdoing.

Journalism the way it should be is protected by the First Amendment. It’s the most important freedom. Without it all others are threatened.

In 2012, the Obama regime turned truth on its head, falsely declaring Assange an enemy of the state, forcing him to take refuge in Ecuador’s London embassy to avoid unjust arrest, extradition to America, prosecution, and imprisonment to silence him – for doing the right thing, for the crime of vital truth-telling.

At the time, a secret grand jury issued a sealed indictment, reportedly accusing him of spying under the long ago outdated 1917 Espionage Act, enacted shortly after America’s entry into WW I.

It should have been declared null and void decades ago. During WW I, it prohibited anyone from interfering with US military operations, supporting the nation’s enemies, promoting insubordination in the ranks, or obstructing military recruitment.

It remains the law of the land, used to charge, prosecute, convict and imprison Chelsea Manning unjustly, along with other unjust charges against her.

Assange faces the same fate if extradited to America. Anyone exposing US high crimes and/or other dirty secrets Washington wants suppressed is vulnerable.

Trump earlier called him “disgraceful,” saying the “death penalty” would be OK against him and others associated with WikiLeaks.

John Bolton once said Edward “Snowden should swing from a tall oak tree.” He called for “a cyberwar attack on WikiLeaks.”

Attorney Carlos Poveda believes a deal was struck between Ecuadorian President Moreno and the Trump and Theresa May regimes to extradite Assange to the US, saying:

“There has been a rapprochement between the United Kingdom, the United States and Ecuador,” adding:

“I believe that (the US and UK) have reached some agreement, and that is exactly why the special protocol (on home rules) was introduced, which is to justify Julian’s withdrawal (from the Ecuadorian embassy) to accelerate the process of ending his asylum and hand him over to the UK authorities” – for extradition to America.

Major unjust charges await him, Poveda saying “(i)t will not be a death penalty, but he may get a life sentence” – maybe without the possibility of parole.

Horrific US mistreatment of Chelsea Manning, other whistleblowers, and countless others falsely charged in the US show the imperial state wants everyone in its crosshairs denied their fundamental rights if dare reveal government wrongdoing.

Constitutionally guaranteed due process and equal protection under law no longer apply in the US. Police state injustice replaced them.

Chelsea Manning languishes in solitary confinement detention since rearrested on March 8 for invoking her constitutional rights, refusing to give grand jury testimony, believing she was wrongfully subpoenaed for three reasons.

Trump regime hardliners opposed the commutation of her sentence by Obama, wanting her imprisoned again for revealing US high crimes of war.

They’re aiming for her to unwittingly self-incriminate herself during grand jury testimony, along with providing information to be used against Assange.

If expelled from Ecuador’s London embassy, he awaits a harsh fate similar to years of torture abuse Manning continues to face.

His supporters pitched tents outside the embassy, backing his right of asylum. “NO EXPULSION” is spelled out in LED lights on the sidewalk in front of the embassy, cameras positioned near its entrance.

Award-winning author Stephen Lendman lives in Chicago. He can be reached at [email protected]. He is a Research Associate of the Centre for Research on Globalization (CRG). His new book as editor and contributor is titled “Flashpoint in Ukraine: US Drive for Hegemony Risks WW III.”

US Extradition of Assange Would be Violation of International Law: UN Special Rapporteur

Nils Melzer, the UN Special Rapporteur on torture, issued a statement calling upon the Ecuadorian government of President Lenín Moreno to “abstain from expelling Mr. Assange … or from otherwise ceasing or suspending his political asylum.”

Melzer warned that if Assange was removed from the embassy, he was “likely to be arrested by British authorities and extradited to the United States,” adding, “Such a response could expose him to a real risk of serious violations of his human rights, including his freedom of expression, his right to a fair trial and the prohibition of cruel, inhuman or degrading treatment or punishment.”

Senior Ecuadorian officials have sought to deflect any questions about WikiLeaks’ claims that a high-level source within the country’s state apparatus indicated that Assange’s expulsion from the embassy building would take place “within hours or days.”

Outside the Ecuadorian embassy Friday, the country’s ambassador to Britain, Jaime Marchan, told the press that there was “no change in the Señor Julian Assange situation” and that he was “offended” by reports to the contrary.

Marchan, who has played a central role in creating a hostile environment for Assange within the embassy, was then asked, “Is he going to be released in the next couple of hours?” He responded, “We are definitely not going to comment on that.”

The country’s foreign minister, Jose Valencia, declared on Twitter that WikiLeaks’ statements were “unfounded” and that his government would not be “giving a running commentary” on “rumours” that it found “insulting.”

Valencia then effectively confirmed WikiLeaks’ warning, stating, “Diplomatic asylum is a sovereign power of a state which has the right to grant or withdraw it unilaterally when it considers it justified.”

The suggestion that political asylum can be granted and withdrawn, based on political expediency and the immediate interests of national governments, makes a mockery of international law. Political asylum is either inviolable, or it does not exist at all. Assange’s status as a political refugee has been repeatedly confirmed by the United Nations Working Group on Arbitrary Detention and other international rights organisations.

Valencia pathetically added that any decisions taken by his government would be carried out in a “sovereign manner independent of other countries.”

The foreign minister’s claims notwithstanding, world public opinion already recognises that the Moreno regime is operating as a vassal of the US government. Within Ecuador, the government enjoys an approval rating of less than 20 percent and is seen by the bulk of the population as a corrupt lackey of American imperialism.

US Extradition of Assange Would be Violation of International Law: UN Special Rapporteur