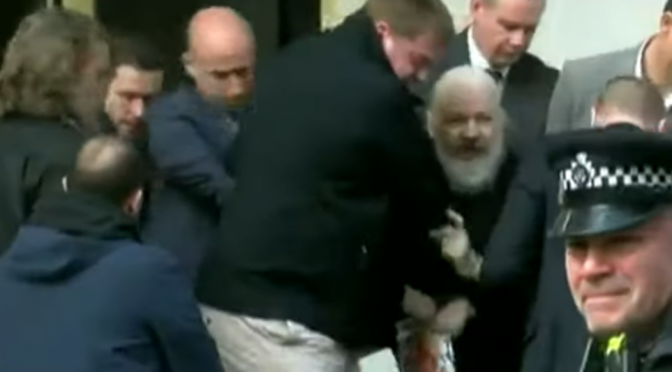 Ecuadorian Moreno just handed Julian Assange over to the UK police for a possible extradition to the United States, where Collateral Murder whistleblower Bradly “Chelsea” Manning is incarcerated again for refusing to snitch on Wikileaks.

Are we worthy of their sacrifices?

BREAKING: A high level source within the Ecuadorian state has told @WikiLeaks that Julian Assange will be expelled within "hours to days" using the #INAPapers offshore scandal as a pretext–and that it already has an agreement with the UK for his arrest.https://t.co/adnJph79wq

Reports surfaced months ago, suggesting Moreno might collude with the US and UK on Assange – ignoring his citizenship rights, along with revoking his asylum granted him in Ecuador’s London embassy by President Rafael  Correa in August 2012.

On Tuesday, Moreno falsely accused Assange of “repeatedly violat(ing) the conditions of his asylum,” suggesting he’ll revoke his asylum, hand him over to UK authorities, followed by extradition to the US.

Moreno lied claiming Assange “hack(ed) private accounts (and) phones.” The phony accusation relates to a WikiLeaks tweet about what’s referred to in Ecuador as the INA Papers.

In March, information from Moreno’s cell phone and gmail account sent to an opposition lawmaker was published online, the material called the INA Papers, allegedly implicating Moreno, his brother, and close associates in an offshore corruption scandal, involving perjury and money laundering.

“(i)n WikiLeaks we have seen evidence of spying, intervention in private conversations on phones, including photos of my bedroom, of what I eat, of how my wife and daughters and friends dance.”

He accused Correa of spying on him by planting a hidden camera in the wall of his presidential office. Correa called the charge absurd.

WikiLeaks didn’t publish the INA Papers. Pressured by Washington and Britain, Moreno has been seeking an easy way to justify revocation of Assange’s asylum. He provided no evidence supporting his charges because none exists.

Assange is a political refugee – granted Ecuadorian citizenship and given asylum in the country’s London embassy by former President Correa.

Under international law, refugees and asylum seekers are protected.

Article I of the 1951 UN Convention Relating to the Status of Refugees calls them:

“(P)ersons who owing to a well-founded fear of being persecuted for reasons of race, religion, nationality, membership of a particular social group or political opinion, (are) outside the country of their nationality, and (are) unable to or, owing to such fear, (are) unwilling to avail (themselves) of the protection of that country.”

Incidentally during the arrest, the RT camera crew caught a SERCO van nearby…

It turned out that Assange was indeed transported from the Ecuadorian  embassy to his interrogation cell in this van.

Serco goes by many names so always look under the hood in their corporate documents to find its trail back to Queen Lizzie. In America, it operates as Serco Inc. and claims on its website that it “is a leading provider of professional, technology, and management services for the federal government”. Headquartered in Reston, Virginia, Serco Inc. has approximately 10,000 employees, annual revenue of $2.5 billion, and is ranked in the top 35 of the largest federal prime contractors.

Piercing the corporate veil, we find that Serco Inc. is a wholly-owned subsidiary of Serco Group plc, a $7 billion international business that works with government and public services around the world.

Many researchers say that Serco runs the United Kingdom (UK), Canada, and Australia. Serco has over 60,000 people in 35 countries across the world. To our international readers, it is highly doubtful that they are not operating in your country.