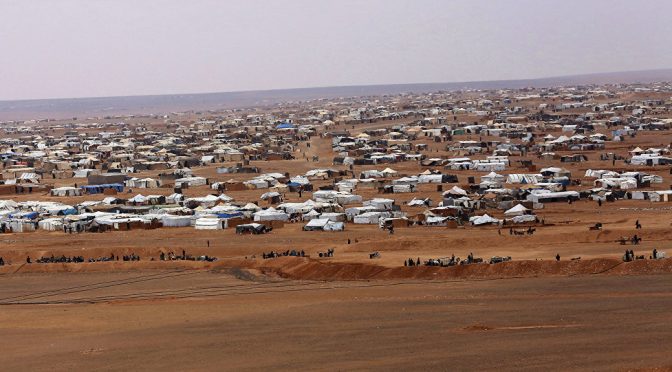 Just a few weeks after we’ve posted a MintPress article on the plight of 40,000 Rukban refugees inside a US controlled concentration camp in Syria, more than 1,300 of them are being released through the humanitarian corridor facilitated by Russia.

Indeed, it is a very complicated process of sorting out which of the Rukban refugees who are not part of the CIA ISIS operation, and are merely seeking refuge as the US conduct its three-faced intervention inside the country, i.e. by injecting ISIS terrorists, inserting US Special Forces to assist those who want to topple Assad, and by establishing refugee camps that behave much like the Nazi concentration camps in WW2.

MOSCOW (Sputnik) – More than 1,300 refugees have left the Rukban camp in Syria through the humanitarian corridor in the past 24 hours, according to Major General Viktor Kupchishin, the head of the Russian Centre for Syrian Reconciliation.

“1,358 refugees have left the Rukban camp through the provided humanitarian corridor in the past 24 hours,” Kupchishin said late on Sunday at a daily news briefing.

Last week, Russian Ambassador to the UN Vassily Nebenzia said at a meeting of the UN Security Council that Moscow intends to continue negotiations with the United Nations, the United States and Jordan on the issue.

Nebenzia pointed out that tens of thousands of internally displaced persons in the camp are being kept on “humanitarian drip” in unacceptable conditions and the vast majority of them wishes to leave the settlement and return to their places of origins.

Nebenzia also noted that Russia had already opened up two humanitarian corridors to allow the passage of refugees from Rukban to chosen places of residence, including Latakia, Homs, Palmyra, suburban Damascus and Aleppo, among others.

Russia and Syria have repeatedly tried to draw the attention of the international community to the deplorable conditions at the camp, which houses more than 40,000 internally displaced people, mostly women and children. Both Moscow and Damascus have criticized the United States over its reluctance to allow people to leave the camp.

The Rukban refugee camp is part of the US-controlled zone around its base in At-Tanf.

All so-called “humanitarian” refugee camps run by the West are moneymaking ventures, including that of the Red Cross. The amount of actual relief goods and medical assistance will always be just a token of what these organizations received from kindhearted individuals and governments.

This is not to mention the sordid medical practice that are being implemented inside the camps to exploit the dire conditions that the refugees are forced to accept. This includes trafficking of women and children, and worse, organ harvesting.

If the Donald Trump administration is indeed fighting alongside the Eastern-led Alliance, he should have closed down this concentration camp a long time ago. Wait, he also said last year that American boots on the ground will be coming home.

Yet, his inability to do so and his government’s latest incarceration of Bradly “Chelsea” Manning, and the impending extradition of WikiLeaks’ founder Julian Assange, only suggest that he is indeed working for himself and the Deep State war chickenhawks.

Too many were being duped in the last two years.