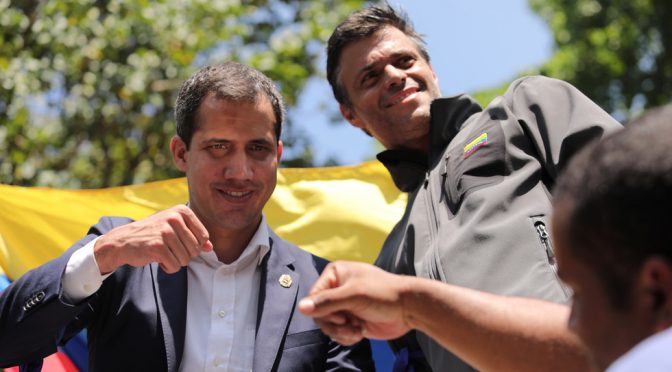 In what could be the final nail in the coffin of Western Deep State’s attempt to overthrow the legitimate Maduro government, the latest attempted coup sparked by a video of Obama doppelganger Juan Guaido loitering around an airport in Caracas was neutralized within a day, with mentor Leopoldo Lopez seeking refuge at the Chilean embassy.

The rest of the actors are now seeking asylum in the Brazilian embassy.

Everyone knows that a regime change cannot be accomplished with a mere video of the instigation, a few smoke grenades, and a box of bullets.

The Venezuelan foreign minister has accused the US-backed opposition of planning Tuesday’s coup attempt in Washington, and said the government would work to keep the peace.

Foreign Minister Jorge Arreaza told Reuters by telephone that only around 30 soldiers had supported the coup instigated by opposition leader Juan Guaido. He described the plot as “another chapter” of an American effort to topple the government of President Nicolas Maduro.

While downplaying the scale of the uprising, Arreaza said it did not originate within the military, but that opposition leaders planned the event in Washington.

“It is not a coup attempt from the military. This is directly planned in Washington, in the Pentagon and Department of State, and by [National Security Adviser John] Bolton,” Arreaza told Reuters.

“They are leading this coup and giving orders to this man Guaido,” he said.

What this latest mindless action has exposed, however, is the gross incapacity of the Deep State to launch a more aggressive action that is directly proportionate to the value of resources than could be gained once a friendly administration is established in Venezuela.

Even the latest offer from Prince’s Blackwater private army was turned down for lack of budget.

Both the US and UK governments have imposed economic and political sanctions against the Maduro government, and have also refused to release the gold deposits of the Venezuelan people to force a regime change by choking the Venezuelan economy.

In short, the Western establishment has reached the end of its lifeline, and it is desperately seeking resource-rich countries to be under its control because big economies like Russia, China and India are spearheading the move to return to the gold-based banking system in a bid to render the highly weaponized fiat dollar irrelevant.

All it can do now is to distract the Western population with mandated vaccinations via false flag measles outbreak, to delay the inevitable Yellow Vest type that could quickly turn into an armed insurrection in the US.

2 thoughts on “Low Budget Coup Fizzles Out Quickly in Venezuela”