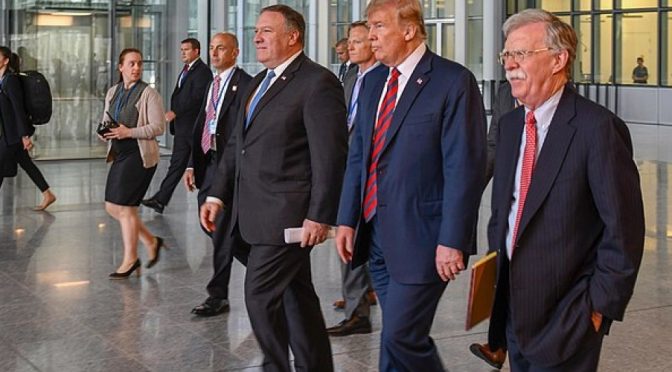 While the crazed and corrupt people who comprise the Democratic Party and US print and TV media continue to insist that Russiagate is real, a very real threat is emerging in Russia, China, North Korea, and Iran. The threat arises from the fact that Washington has taught each country to have no trust in America’s veracity. The governments of the four countries have learned that everything Washington says is a lie.

Moreover, the countries have learned that Washington does not accept their sovereignty and objects to their existence. Each of the four countries has experienced sanctions designed to overthrow their governments or cause them to submit to Washington’s will.

Russia long ago saw through Washington’s disingenuous claim that the missile ring that Washington has arrayed around Russia is defensive and directed against (non-existent) Iranian missiles. Putin has said many times that the “defensive” missiles can easily and quickly be converted into nuclear armed offensive missiles that leave Russia no response time.

I have always been amazed at the utter stupidity of the Polish and Romanian governments for accepting these American missiles. No doubt the Polish and Romanian officials were paid handsome bribes, but money is no good to a dead person. You can bet your life that the Russians are not going to permit such operable weapons to be on Russian borders during a time of high tensions that exists today between the West and Russia.

Not content with this reckless provocation of Russia, the dumbshits that comprise the US government have announced a program to put weapons in space that can neutralize Russia and China’s nuclear deterrent. This reckless and irresponsible plan did not go unnoticed in Russia.

You can bet your life that Russia and China are not going to sit there and wait for Washington’s attack, especially as Russia has coming into deployment hypersonic missiles incapable of interception by any known or deployed means.

What Washington and its corrupt European vassals are doing is preparing the grave for the Western world.

In the US self-interested political propaganda has succeeded in crowding out all attention to real issues, such as mass displacement of jobs by robotics, global warming whatever the cause, and the rising risk of nuclear war. When the rest of the world looks at the West, it sees an insane asylum in which the two greatest threats to American national security are said to be Venezuela and a Russian agent in the Oval Office.

It is impossible for anyone to take a country this silly seriously. Consequently, American power is collapsing, to everyone else’s relief. Even Washington’s well paid puppets in Germany, Britain, and France are showing signs of independence that have not been seen since the days of Charles DeGaulle.

The Russians, Chinese, Iranians, and North Koreans know that they are dealing with fools, and they are not going to take any chances. They know that no agreement with America means anything and that Washington speaks only with a forked tongue.

Washington is going to be increasingly frustrated abroad as willingness to cooperate with the insane asylum vanishes. The consequence will be increasing tyranny at home.

Paul Craig Roberts is an American economist and author. He formerly held a sub-cabinet office in the United States federal government as well as teaching positions at several U.S. universities. He is a promoter of supply-side economics and an opponent of current U.S. foreign policy.

7 thoughts on “Reckless US Foreign Policy; Preemptive Nuclear War against Russia and China”