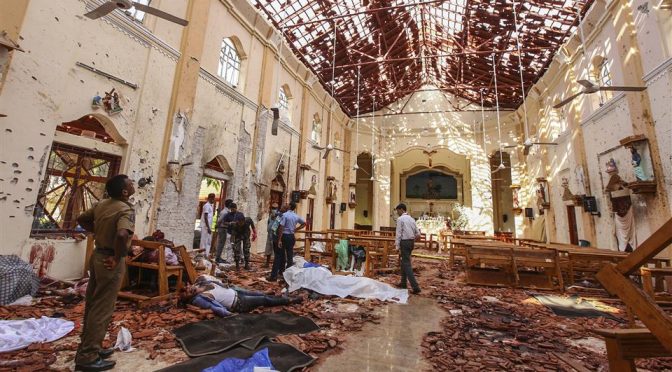 Sri Lanka, Easter Sunday, 21 April 2019: More than half a dozen bomb blasts shook the country killing from 250 to more than 350 people. Depending on who counts, the death toll varies. The devastation took place in in several catholic churches and luxury hotels.

Other explosions, including from – what they say – are suicide bombers, have since killed another several dozens of people. Many are children, women – christen worshipers. Why the luxury hotels? Western (Christian) tourists?

Yesterday, another explosion ripped through a suspicious building, killing 18, including children and women. Again, they, the ‘authorities’, say suicide bombers, who didn’t want their ‘cache’ to be discovered. Conveniently they are all dead – the “suicide bombers”. Nobody can ask them any questions.

There was a lot of confusion, and still is, all through Sri Lanka. Nobody claimed credit for the massacres. There were rumors that Sri Lanka’s President received warnings ahead of the attacks from foreign intelligence, but ignored them. The President denies these allegations. And the explosions continue.

Finally, the verdict is in. The culprits are an Islamic terrorist group, associated with ISIS. What else is new.

Sri Lanka’s population is composed of about 70% Buddhists, 13% Hindus, almost 10% Muslims, mainly Sunni, the Salafi version, and about 7% Christians. The New York times reports that the accused mastermind of the terror attacks was strongly influenced by Wahhabism, the same extreme hardliners that control most of Saudi Arabia.

Hatred between religions seems on the rise. In New Zealand a few weeks ago a white supremacist assaulted a mosque, killing 50. This past weekend, a shooting in a Synagogue near San Diego, California, killed a woman. The murderer said he was inspired by the New Zealand massacre. Are these spontaneous, interreligious mini-wars part of a foreign directed ‘divide to conquer’ effort, a strategy that has been used by empires for centuries, but seems to be alive and well with the current Washington based empire?

“Sri Lanka Easter attacks are the handiwork of terrorists returning from fighting in Syria, practicing the Saudi-backed Wahhabi Salafist ideology,”adding, “though not confirmed yet, they, [the attacks], are in keeping with the modus operandi of Saudi-sponsored Wahhabi terrorism worldwide. [The] Saudi sponsorship of Salafi Wahhabi dogma [is found] across the globe. From Boko Haram to ISIS, and from the Taliban to Al Qaeda, a common ideological thread runs through these terror groups. This is the Saudi-sponsored Wahhabi Salafi ideology whose South Asian counterpart is Deobandi.  For abbreviation purposes, it is becoming increasingly common to term this interconnected ideology as WSD (Wahhabi Salafi Deobandi).”

May we expect a wave of Saudi-sponsored WSD terrorism in the east too? – Is the horror Saudi government protected by the US, because it does its bidding? And this bidding leads to making gradually Islam extremism the justification for NATO bases around the globe? – Perhaps in Sri Lanka, tomorrow? So far Sri Lanka is clean from NATO. Sri Lanka has not even an association agreement with NATO.

Just look at the world-geostrategic location of Sri Lanka, linking the Arabian Sea with the Indian Ocean. Sri Lanka may also have a direct, open-sea connection with the small British island of Diego Garcia, in the Chagos Archipelago, north-east of Madagascar. Diego Garcia hosts the US’s largest Navy base outside the American Continent. Many of the drone killings in Yemen, Syria and other places in the Middle East originate from Diego Garcia. The “civil war” in Syria was (and still is) largely directed from Diego Garcia, as well as from Djibouti.

Wouldn’t it be logical for NATO to set up base in Sri Lanka to control South East Asia? Saudi guided WSD attacks would create the necessary chaos justifying Western secret services – plus NATO – to descend on Colombo, to create further protests and anarchy – a never-ending internal strife, giving the war industry a new never-ending flow of profit, hence, further justifying the never-ending war on terror – and, thereby, moving yet an inch closer to Full Spectrum Dominance over Mother Earth and her hapless spectators, what western humanity has become – a bunch of complacent consumers, drenched in turbo-capitalist market ideology, too comfortable to go on the barricades.

The key and engine to all of this is NATO, whose modus operandi is killing for a living, for dominance and for profit. If there is ever to be Peace – and that’s what the vast majority of the inhabitants of this globe wants – I’m not exaggerating pretending that 99.99% of world population wants to live in peace – then NATO must go, NATO must be dismantled.

So, Europe which has the largest membership in NATO (27 out of 29 nations) has to put the money where her mouth is: Europe calls for Peace, Europe claims to be Peace-loving – really? Then put your money into creating Peace – pulling out of NATO, refusing at once to fund this killing machine under the pretext of “protecting Europe”. Protecting Europe from what? From whom? – Not from Russia – despite all the highly propagandized and highly corporate-funded Russiagate / Russiaphobia, exacerbated by a new artificially implanted fear – China. These countries have no history of expansion, like the west.

They only seek friendly relations of trade, of transport, cultural and research interconnectivity within the supercontinent, Eurasia, and ultimately, they promote a multi-polar world. The best example is the Chinese President Xi’s ingenuity – the Belt and Road Initiative (BRI) that just finished its highly successful forum in Beijing – where more than 120 nations signed memoranda of understanding (MOU) and cooperation agreements with China for tens of billions of dollars equivalent. – What a way of cooperating, instead of sowing western-style belligerence.

Europe and the rest of the world is not in danger, except in danger of itself for being a vassal of the US and for hosting 30-plus NATO bases which would be first in the line of fire, if the east is forced to defend itself from that permanent Pentagon-NATO driven aggression.

Europe withhold your funding for NATO, get out of NATO, dismantle NATO, – NOW, before NATO sets up yet another base in Asia, before NATO spreads more death around the globe.

This article was originally published on New Eastern Outlook.

Peter Koenig is an economist and geopolitical analyst. He is also a water resources and environmental specialist. He worked for over 30 years with the World Bank and the World Health Organization around the world in the fields of environment and water. He lectures at universities in the US, Europe and South America.

3 thoughts on “Sri Lanka: Candidate for a New NATO Base?”