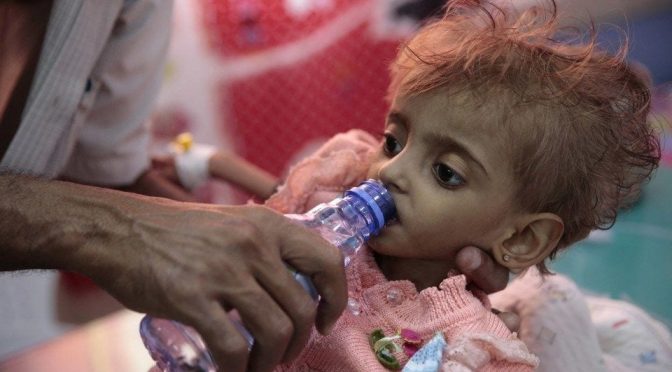 The maps included in the classified military report were presented to President Emmanuel Macron on October 3, 2018 during a “restricted” Defence Council meeting in the French Presidential office.

The leaked document, released on March 15, 2019 by the investigative media outlet Disclose, complements the revelations already published on June 16, 2018 by the newspaper Le Figaro, which confirmed the presence of French special forces fighting alongside the Saudi Arabian army during the battle in the Yemeni city of Hodeida [also known as al-Hudayda].

Despite the disclosures, the French government continues to deny that French armaments and French special forces are involved in offensive operations against Yemen, insisting that they are only deployed in defensive positions on the Yemeni border.

In the United States, a bill sponsored by Democratic Senator Bernie Sanders prohibiting any form of US participation in the war against Yemen was passed by both the Senate, in March, and the House of Representatives, in April. Earlier this week, on April 17th, President Donald Trump vetoed the bill.

The strategy of the Israeli-Saudi Joint Chiefs of Staff, supported by the United States, France and the United Arab Emirates, now envisages seeking victory in Yemen by starving the population.

At least one third of the targets attacked by the warring coalition in Yemen are not military but civilian targets. At least 50,000 Yemeni children have already died as a result of the famine caused by the Saudi Arabian-led coalition attacks.

The Ministerial Conference in Poland on Peace and Security in the Middle East addressed but one important issue and this issue was not on the agenda. At the conference, Israël publicly demonstrated that it had relations with Arab States – the representatives of these countries engaging in conversations inter se. This is remarkable because officially, there are no diplomatic relations between these states.

Israeli Prime Minister Benjamin Netanyahu exploited the US House of Representatives’ vote against the war in Yemen to reveal its military hand in this conflict.

If the truth be known, right at the beginning of this war in Yemen, troops from Saudi Arabia, the Emirates and Israel took part. These three states set up a joint general staff in Somaliland. The latter is not recognized as a state and is controlled by Israel. This war had been the subject of several years of negotiation between Israel and Saudi Arabia. Its objective was to exploit the oil reserves in the “desert of Rub-Al Khali”, the area straddling Saudi Arabia and Yemen. Further exploitation will take place through a joint project in the Horn of Africa.

For Israel, showing its hand in Yemen follows on from its public recognition of its incessant interventions in Syria. This amounts to a rewriting of History, for prior to the Israeli interventions, there were no Iranians – either in Syria or Yemen.

For the United States, this revelation is another step towards the establishment of a Judeo-Sunnite alliance against the Shiites, as announced by US Secretary of State, Mike Pompeo.

About sixty foreign delegates participated in this show and reacted as if comatosed. The Western Press has not deemed this conference to be newsworthy.