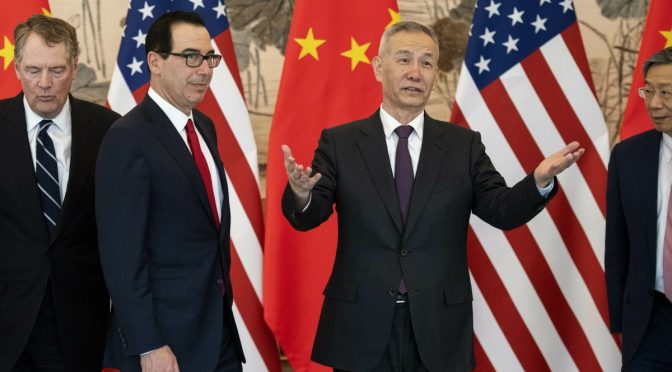 I hate to break the news to China bashers, but the trade war with the US is over. I’ve maintained for months that Trump has no leverage in trade talks with China. If he did China would have done a deal by now.

They haven’t and they likely won’t unless you are talking some form of deal which allows Trump to save face here. But to be honest I’m beginning to doubt whether anyone in the White House cares. This is about the Great Powers Game and the simpleton idea that for one country to win in trade another has to lose.

This is, of course, nonsense.

Trade is not a zero-sum game. Ideally, all voluntary trade is a win-win scenario for both the buyer and the seller. If it wasn’t the trade would not be made. Lost in the numbers is the comparative perceived value of the exchange.

China is still running a massive trade surplus and that is true. But from the perspective of US trade, that is as much a function of Trump’s own profligate spending habits as any structural inequalities.

Trump is running a $1 trillion budget deficit. This is money that is conjured up out of thin air by the miracle of selling bonds. $1 trillion in bonds. Where do you think those $1 trillion in government expenditures goes to?

No. It goes to China. It also finds its way into the US equity market Trump is so in love with and other places that produce goods that we Americans buy with that money. If Trump wants to win the trade war with China he should consider spending a little less money allow consumer prices here in the States to fall and let his tax cuts continue to attract capital for the right reasons – the value the American work force is capable of generating.

Instead Trump slapped 10% tariffs on Chinese goods last year. This has done nothing except exacerbate the trade deficit with China. The overall trade deficit is now at record levels.

Moreover, China responded exactly as one would expect, by allowing the Yuan to depreciate by roughly 10%. It did so for a number of reasons.

First, to protect domestic exporters as one would expect. But more importantly, to assist vulnerable Chinese banks exposed to any slow down and keep them liquid, which it did through Central bank operations.

Over at my blog recently I noted:

China’s not going to implode over these tariffs. It will give Xi and his central bank the opportunity to devalue the yuan in response to the slower flow of dollars. It has to protect the lion’s share of its trade with Southeast Asia and Europe whose currencies are already in trouble.

And it will bail out the most strategically-sensitive banks and businesses over-exposed to them. It’s what they did last year in response to the 10% tariff and it is what will happen this time.

Lastly, however, is the part no one actually wants to discuss which is that China has to protect its trade with Southeast Asia and Europe. The Yuan didn’t devalue in a vacuum. The euro is down 13% from its high as are currencies like the Indonesian Rupiah, the Malaysian Ringgit and Thai Baht.

What Trump and his team are arguing for in trade negotiation is no different than what they’ve offered Iran and Lebanon, surrender your sovereignty or face punishment.

So, China reciprocates and cuts off US soybeans and other food exports. Now, a year later, Midwest banks are facing surging bankruptcies from farmers hit with the double whammy of no exports to China (who now buys them from Brazil) and massive flooding from an abnormally vicious winter and spring.

They have Trump to thank for this. He didn’t help them by not thinking through how we could be hurt by China’s reaction to his belligerence.

The same way Wisconsin dairy farmers are also going bankrupt thanks to the continued flood of cheap European dairy keeping wholesale milk prices low. Why is this happening? Russia countered European and American sanctions over Crimea with a ban on imports of European dairy.

These were both core groups that defected from Hillary Clinton in 2016.

Trump’s team would be fine with a trade deficit if China was still recycling that trade surplus into US Treasury bonds. They aren’t. The Chinese have held their stock of US debt between $1.1 and $1.25 trillion for two years now.

They are sending a lot of those dollars back out into the world to fund their massive Belt and Road Initiative (BRI). They are also using them to power swap arrangements with countries feeling the bite of Trump’s sanctions. Countries like Turkey, Pakistan and Iran, for examples.

To the paranoid schizophrenics who run his White House can only see China rising as a threat not a complement to the US.

Again, these are people with a zero-sum view on trade.

They, like Trump, only see things in terms of power. And if China is running a surplus they are gaining it and we are losing it.

The push to sanction the world and stop the unapproved use of the dollar is beginning to have catastrophic effects on the world economy. People like John Bolton and Secretary of State Mike Pompeo don’t care about those things. In fact, the more our ‘enemies,’ as they see them, suffer, the better it is for us. Such is their reductionist view of the world.

In no way do I believe China is somehow blameless or anything. They have taken egregious advantage of the US’s terrible policies for decades. But they are also shifting away from their mercantilist policies as Xi shifts the economy away from exports and towards a domestic consumption model.

It’s already happening as China’s trade surplus falls as a percentage of GDP and domestic consumption and investment take over.

The next steps will be interesting. I expect Trump isn’t bluffing now about raising tariffs to 25%. I also expect that China will again stop all purchases of US oil like it did between November and March under the threat of sanctions due to buying Iranian oil while letting the Yuan fall sharply.

After that the real energy war starts as Russia completes Power of Siberia and begins pumping natural gas to China. And China directs its state oil companies to buy more oil from Iran while lowering its purchases from Saudi Arabia unless the Saudis accept Yuan for it.

That’s where the real leverage in this whole fiasco lies. Trump is trying to blackmail the world with expensive dollars and cheap oil. But as he sabotages global trade and unleashes chaos worldwide the dollar will rise, not fall, as a mad scramble for dollars to pay debts will accelerate. It’s already starting.

Interest rates, now low as investors look for safe-haven assets, will spike much higher as central banks disgorge their US debt to defend their currencies. And the frackers who have issued all new junk bonds will be trapped as oil prices collapse and debt servicing costs rise.

And there will be another constituency ready to lynch Trump come election time.

Tom Luongo is an independent political and economic analyst based in North Florida, USA

17 thoughts on “Trump’s Trade War is Already Over”