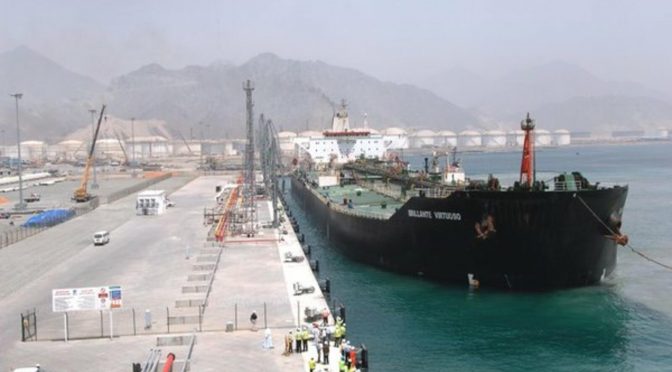 The United Arab Emirates has been the subject of another Zionist false flag operation, wherein its oil tankers and depot exploded in flames with a strong possibility that it could have been blamed on Iran, because the Deep State has to offset its loses in Venezuela and its trade war with China.

The United Arab Emirates (UAE) has confirmed, after initial denial, that a number of commercial ships have been targeted by “sabotage” attack near its territorial waters.

The Foreign Ministry of the United Arab Emirates issued a statement, saying that four commercial vessels have been targeted by “sabotage operations” near its territorial waters.

ABU DHABI, 12th May, 2019 (WAM) — Four commercial ships were subjected to sabotage operations today, 12th May, near UAE territorial waters in the Gulf of Oman, east of Fujairah, the Ministry of Foreign Affairs and International Cooperation, MOFAIC, has announced.

The Ministry said that the concerned authorities have taken all necessary measures, and are investigating the incident in cooperation with local and international bodies.

The MOFAIC statement said that the carrying out acts of sabotage on commercial and civilian vessels and threatening the safety and lives of those on board is a serious development. It called on the international community to assume its responsibilities to prevent such actions by parties attempting to undermine maritime traffic safety and security.

The Ministry also described as ‘baseless and unfounded’ rumours earlier today, 12th May, of incidents taking place within the Port of Fujairah, saying that operations within the port were under way as normal, without any interruption.
WAM/Nour Salman

This event happened just days after the United States Maritime Administration warned that “Iran and/or its regional proxies could take action against US and partner interests, including oil production infrastructure” in the region. Saudi Arabia and the UAE are both high paying US client states.

How did the latest Zionist false flag failed?

The UAE government knows precisely as to who actually did it. That’s why they only say the word “sabotage” but by whom, it wasn’t mentioned.

There have been reports that American and French warplanes had been flying over the port when the incident happened. A US aircraft carrier strike group happens to be in the vicinity, as part of Trump’s anti-Iran armed rhetoric.

The UAE Foreign Ministry, however, denied this initially as “baseless and unfounded” because it is not to their interest to admit that they, too, are being threatened by their Zionist masters, who are also struggling to survive economically. The competing clans must never know that the one in power is under threat from the West.

So, despite the initial UAE government’s denial, witnesses have emphasized that the blasts have taken place and some media sources have even went further, identifying a number of oil tankers hit by the explosions by their hull numbers as follows:

Moreover, the UAE government knows that Iran could not have done it because everybody in the region believes that it’s all about psychological warfare, i.e.

Even the Deep State knows that once they start dropping bombs on Iran, just like they did against Iraq more than a decade ago, the Iranians will only bring the war inside the US, because the only thing that keeps the Sheeples from lifting a finger against their own warmongering government is that all the wars it has waged for the last 100 years did not occur inside the US.

If the US military attacks Iran, there will be no place to hide for these Deep State stooges.

What Drives them Mad?

For the Deep State, this latest false flag operation is a two-edged sword:

By this time, whoever is on deck at the US carrier strike group near the area could not use this operation for blaming Iran because of the many witnesses to the actual bombing using US and French warplanes.

However, this attack could also be used instead as a strong message to the UAE warlords to pay their dues on time. Bear in mind that before the Kashoogi incident, Saudi Arabia wasn’t really planning of purchasing military arms from the US, or if it did, at a much lower amount.

In fact, a similar incident did occur inside Saudi Arabia, earlier this week, when a number of powerful explosions rocked Saudi Arabia’s port city of Yanbu’, an important petroleum shipping terminal for the kingdom. Reports, however, fell short of giving any reason for the blasts or possible casualties.

No further details have been made available and no group or individual has assumed responsibility for the blasts.

Yanbu’ is an important petroleum shipping terminal for Saudi Arabia and home to three oil refineries, a plastics facility and several other petrochemical plants.

Also, you must remember that after the murder of Jamal Kashoggi right inside the Saudi Embassy in Turkey, suddenly Trump told reporters that “he was disinterested in stopping a Saudi Arabian “investment of $110 billion into the United States,” despite tensions over the disappearance of Washington Post contributor Jamal Khashoggi.”

According to the Stockholm International Peace Research Institute (SIPRI), 70 percent of Saudi’s arsenal now comes from the United States. SIPRI tracks transfers of major weapons and is one of the few organizations to do this.

‘The USA has further solidified its position as the world’s leading arms supplier,’ says Dr Aude Fleurant, Director of the SIPRI Arms and Military Expenditure Programme. ‘The USA exported arms to at least 98 countries in the past five years; these deliveries often included advanced weapons such as combat aircraft, short-range cruise and ballistic missiles, and large numbers of guided bombs.’

So, Iran will continue to be the enemy of the Arabs for the US to protect themselves from. Simple formula, works all the time.

This one is not a psychological warfare, however, but an actual thievery of the 4000 year old Palestinian land.

All in all, the most urgent motivation for starting WW3 is still the ongoing bankruptcy of the Deep State, coupled with Trump’s inability to win the trade war with Xi. It was already doomed when it started as the US doesn’t have enough leverage against China.

On the other hand, China’s $1.2 trillion worth of US treasury bonds is being systematically unloaded by the day. Imposing more tariffs on Chinese goods only means that US importers will have to pay more to keep their US corporate government afloat.

China’s door to talks with the US about their trade dispute is always open, but China will not yield on important issues of principle and will never brush aside its priorities. – Xinhua News Agency.

The Western economy has been financed with Asian historical assets for the last 3 centuries, with the understanding that the former will also develop the East industrially. However, the Deep State opted for hegemony instead.

Now, we are seeing that mere military superiority is not enough to keep the rest of the world under its feet. The united front against the Deep State has gained the upperhand, and it will just be a matter of time when the Americans will finally wake up to the fallacy of their own two-party Corporatocracy.

Meanwhile, while nobody is looking, Zionist Israel is rampaging again in Palestinian lands. Based on a United Nations (UN) report, the Israeli forces destroyed at least 41 Palestinian-owned structures in the occupied East Jerusalem al-Quds and West Bank over the past two weeks alone.