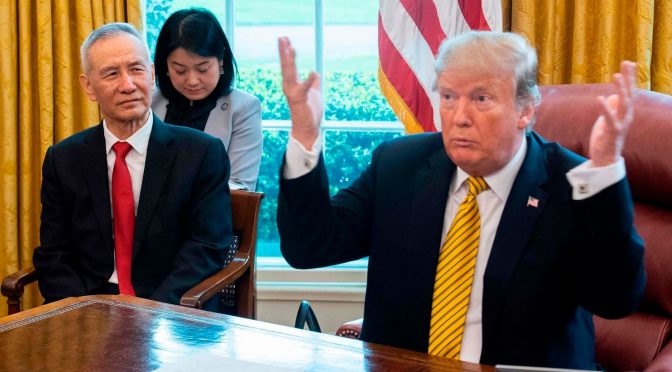 In any form of conflict, one cannot expect China to use aggressive language to hammer a point, but as far as the US is concerned, that’s the norm. This doesn’t mean, however, that China is incapable of doing the same. She just doesn’t do it out of arrogance, but to rally the people into a coherent position against an external aggressor.

So, when Frustrated Trump didn’t get what he wanted from Xi’s trade negotiators, the former decided to slap the $200 billion worth of Chinese products with a 25% tariff, up from their 10% previous tariff rates, expecting of course that the Chinese side would eventually give up some of its trade positions. But this is not happening yet.

In fact, it may never happen at all if we consider the two similar articles, one in English and the other in Chinese, that recently came out from Chinese mouthpieces, i.e. Xinhuanet and Global Times, wherein the Chinese version of the same article ended with a call for a “people’s war.”

Here’s the international version of the Chinese position regarding its trade negotiations with the US:

White House Chief Economic Adviser Larry Kudlow said Sunday that both the US and China will suffer when questioned about who would pay the tariffs imposed by the US on Chinese imports in an interview on Fox News. Although he also argued that the effect on the US economy would be modest, his remarks were singled out by the US media for contradicting US President Donald Trump’s claim that duties are a good option that would help the US economy.

The China-US trade war is unprecedented. With everything on the table, Washington is becoming increasingly anxious at seeing no sign of China concessions. The US had hoped China would quickly surrender and didn’t psychologically prepare itself for a protracted war. The way the US has opted to mobilize public support is telling untenable stories. For instance, Washington stressed that it could collect $100 billion in tariff revenue and China would pay the tariffs. For the new tariffs, it claimed “only 4 points were paid by the US” and “21 points by China.” This is nonsense.

The US also claimed that its tariff hikes would force companies to leave China. China itself today is a huge market, the size of which is comparable to, and on the trend to surpass, that of the US. China’s development in essence is intended to meet the demands for a better life of more than 1 billion people in the country. The consumption capabilities and market consumption potential driven by demand are what foreign companies value most when they come to China.

The White House might as well try to call on American companies such as General Motors, Ford, Apple, McDonald’s and Coca-Cola to leave China. Will any of them follow?

China on Monday announced tariff hikes ranging from 5 percent to 25 percent on $60 billion worth of US goods. This demonstrates China’s determination to resolutely strike back against the US tariff moves. We believe China surely will take further countermeasures.

China has plenty of countermeasures. The US tariff moves are very much like spraying bullets. They will cause a lot of self-inflicted harm and are hard to sustain in the long term. China, on the other hand, is going to aim with precision, trying to avoid hurting itself.

The Chinese side is obviously more realistic while the US is falsifying. This will, to a large extent, influence how the two countries digest the trade war impacts.

That’s the most that the Chinese media can do when it comes to diplomacy at this wee hours of the trade war between the two countries.

However, the domestic version of that same article is far more combative starting from its title and onwards:

The US is constantly arrogant…

White House economic adviser Kudlow said on the 12th when a TV reporter asked who would pay for the huge tariffs imposed by the United States, saying that “both sides will be affected.” Although Kudlow said that the US economy can cope with this impact, his statement was still stunned by the media to emphasize his different descriptions of President Trump’s effect on the tariff war. The latter has always emphasized that tariff collection is a good option to help the US economy.

The trade war of this scale is unprecedented in China and the United States. Washington has become more and more anxious when it puts all the bets on it and looks at any signs that China has not been compromised. Washington originally expected quick fixes and no collective Chinese psychological preparations for a lasting trade war. Its current mode of mobilization is to talk about some unspeakable monks without common sense.

For example, the White House repeatedly said that increasing tariffs is a good thing for the US economy and national welfare. It emphasizes that the United States can levy 100 billion U.S. dollars in tariffs a year, and the money is paid to the United States by China. The latest statement also compiled a data saying that China paid 21% of the 25% new tariff, and the United States only paid 4%. This is completely a crap of the brain.

As is known to all, tariffs are paid by US importers, and those importers can negotiate with Chinese manufacturers to share some of the tariffs, while others pass the price increase to the consumers. Since the profits of Chinese products exported to the United States are not high, the ability of US importers to let Chinese manufacturers share tariffs is bound to be limited. This will increase the share of US consumers’ tariffs.

The US also used companies from various countries to withdraw from China due to increased tariffs from the United States to intimidate us and cheer the US public opinion. The US seems to arrogantly despise China as a professional supply market for US consumption, and regard China’s prosperity as a decision depending on how many markets the US gives to China.

China is not a small country that it can only rely on the United States to eat and eat. Especially today, China is already a huge market close to the size of the United States, and the trend will exceed the United States. In essence, China’s development is to continuously meet the needs of more than one billion people in the country for a better life. The foreign companies that come to China first value the real consumption power driven by such demand and their continuously activated market consumption potential.

The White House may try to summon GM, Ford, Apple and other big American companies to leave China. China is one of the best product sales markets for them. Which one of them can the White House sway?

Even with processing trade, China’s infrastructure, workers’ quality, and tolling capabilities are not easily accessible to an Asian country. We believe that there may be a small number of companies considering relocation to evade tariffs, but that part of migration is not a strong impetus for China to make strategic concessions. The US side should not be illusory.

China announced on Monday that it would impose a tariff rate on about $60 billion worth of goods originating in the United States, with about half of the tariffs imposed on taxable items be raised to 25%. This is China’s determination to resolutely respond to the United States’ tariff increase measures. We believe that China will have further countermeasures.

There are still many counter-products in China, and we now emphasize the precision of counter-measures. The United States is engaged in large-scale tax increases, and the rate of self-injury is extremely high. This practice is very embarrassing, but it has been difficult for a long time. The next thing China wants to do is aim at shooting and try to avoid self-injury. Unlike the US that is trying to make quick decisions, the Chinese side is prepared to fight for a protracted war.

The Chinese government has been blunt about the difficulties and losses that the Chinese retaliation will cause to the Chinese economy. This is in stark contrast to the long-term embellished rhetorics of the US government about the effects of the trade war on its US economy. Based on this article, the Chinese side is obviously more realistic, and the US side is suspected of falsifying. This will greatly affect the quality in the respective understanding of the trade positions and disagreements between China and the United States.

The most important thing is that in the Sino-US trade war, the US side fights because of greed and arrogance, and it keeps bragging because if it does not brag, does not make stories, the morale [of the American people] will break at any time.

China is fighting back to protect its legitimate rights and interests. We know why it is necessary to negotiate and why the negotiations should not be inflexible. The trade war in the United States is strongly advocated by one person and one team, and they represent the public of the country. China is coerced by the entire country and all the people at the same time.

What this means is that the Chinese elite are imploring the people to stop patronizing US products from hereon, e.g. smartphones to luxury cars, because it’s a war against greed and arrogance of the few that controls the US economy.

President Xi’s government, for its part, continue to rally the rest of the world away from the “clash of civilizations” and into a process of “dialogue and cooperation leading towards a better world for all,” or a “shared future for mankind.”

Beijing’s message is loud and clear. It has chosen conversation over confrontation with a deep belief that boosting inter-civilization dialogue can help nations around the world shrink trust deficits, promote mutual understanding and friendship, and thus bolster their cooperation.

In this age of growing interdependence when the international community is grappling with a string of non-traditional security threats such as terrorism, refugee crises and climate change, no single nation or civilization can stand alone.

To meet common challenges and create a better future for all, China looks to culture and civilization to play their role, which is as important as the role played by economy, science and technology, said Xi while addressing the opening of the CDAC.

The conference, he added, is convened just for this purpose, as it creates a new platform for civilizations in Asia and beyond to engage in dialogue and exchanges on an equal footing to facilitate mutual learning.

And in that process, dialogue and cooperation are the only sure path leading towards a better world for all, or in Xi’s words, a community with a shared future for mankind.

“It is foolish to believe that one’s race and civilization are superior to others… It is disastrous to willfully reshape or even replace other civilizations.” – Chinese President Xi Jinping, Speech at the Conference on Asian Civilizations Dialogue, Beijing

Which now brings us to the ultimate question, why are the Americans still tolerating the continued stupidity emanating from Washington DC?