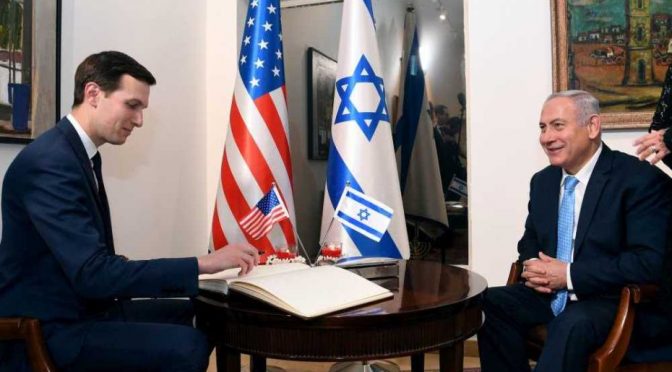 The ‘Deal’, presumably a road map for peacefully settling the Palestinian problem, was drawn up, ironically, by a small group of American Zionists responsible for the formulation of American foreign policy. The group is led by Jared Kushner, Trump’s son in law and senior presidential adviser, with help from John Bolton, national security advisor, Mike Pompeo, Secretary of State and David Friedman, American ambassador in Israel.

Anecdotally, it should be noted that Netanyahu is a close friend of the Kushner family and used to visit the family while in the US and stay overnight, at times in Jared’s bedroom; perhaps making Jared an unregistered foreign agent serving Israeli interests. With such strong pro-Israeli input in drawing up the ‘Deal’, what does one expect the ‘Deal’ to be except a right-wing, Likudist plan to establish a Great Israel from the River to the Sea.

A central question to this ‘Deal’ is, what does Trump have left in his pocket to offer the Palestinians? Historically, Palestinian maximum demand was the liberation of mandated Palestine. With the passage of time the Palestinians have lowered their demands to the minimum of three elements.

Trump has already given away or eliminated these three quintessential elements necessary for resolving the Palestinian problem peacefully. Trump has recognized united Jerusalem to be the eternal capital of Israel and moved the American embassy there. He has also acquiesced to Netanyahu’s declaration that he will annex the Israeli settlements in the West Bank and probably an eventual annexation of the entire West Bank.

Saeb Erekat, chief Palestinian negotiator, elaborated further, noting that “Trump and Netanyahu are planning to terminate the Palestinian cause by removing Jerusalem from any solution, annexing major settlements and finding a capital for us on the outskirts of Jerusalem.”

In view of the foregoing, Mahmoud Abbas has no choice but to reject the ‘Deal’, with the consequence of being condemned for sabotaging the peace process and for Netanyahu reverting to his mantra that there are no Palestinians to negotiate with.

Although the ‘Deal of the Century’, by all indications, deals exclusively with resolving the Palestinian-Israeli conflict peacefully, it nevertheless has a Syrian dimension which has escaped notice and has not been dealt with in the published speculations and analysis so far.

During the 1990’s, after the Madrid peace conference, there were Syrian-Israeli peace negotiations. The negotiations, both official and Track Two negotiations, in which I participated, dealt with the four central issues: Israeli withdrawal, security arrangements, timeframe for withdrawal and normalization of relations. These four issues were theoretically surmountable.

A fifth issue, peace agreement between Syria and Israel had to be within the framework of a comprehensive and just peace, was insurmountable. It was very unlikely for Syria to sign a separate, unilateral peace with Israel without progress on the Palestinian-Israeli track; as Sadat did in 1979.

In conclusion, Miko Peled, an author and human rights activist born in Jerusalem, writes: “Though the ‘Deal’ of the century will try to eliminate the Palestinian issue for good, what the architects of the “Deal” in their arrogance fail to see is that this so-called “Deal” is nothing more than an irresponsible, impractical and precarious plan that will fail just as soon as it is raised”.

The ‘Deal of the Century’: Two Con Men’s Job

At the time of writing the article, not enough credible material was published about the “Deal”, so the article’s introduction was “Yes, ‘You can judge a book by its cover’, especially if the ‘book’ is the ‘Deal of the Century’ and the ‘cover’ lauds two con men, Trump and Netanyahu.”

Now, apparently enough credible material about the content of the ‘Deal’ has been published, particularly the article in ‘Hayom’, the Israeli Jewish paper. The deal merits a second look, without resorting to reading a ‘book’ by its cover.

The deal doesn’t offer the Palestinians many concessions. Their basic and minimum demands for a peaceful resolution of the Palestinian problem are not met. It is an ultimatum to surrender and accept whatever Netanyahu dictates:

From all indications, the deal was formulated by the Zionists as a setup, a trap for the single purpose of it being rejected by the Palestinians, effectively serving Israeli designs. Upon certain Palestinian rejection of the deal, Israeli mantra that there is no Palestinian peace partner to negotiate with will be heard, loud and clear.

Additionally, Israeli expropriation of Palestinian land and expansion of settlements will continue, as will the continuation of ethnic cleansing and more apartheid policies. These developments will also be coupled with severe punishments of the Palestinians for rejecting the deal; in which case the US will likely cancel all its financial support to the Palestinians and pressure other countries to do the same.

Worse yet, if Palestinian Authority President Mahmoud Abbas, in the extremely unlikely case, signs the deal, which would be signing his death warrant, but Hamas and Islamic Jihad do not sign, a war would be waged on the Gaza Strip with the full backing of the US.

There is hardly any incentive for the Palestinians to accept the deal and it has already been rejected by Palestinian leaders before its official publication. President Mahmoud Abbas said, “We rejected this deal from the beginning because it did not include Jerusalem and we do not want a state without Jerusalem or without Gaza.”

Palestinian Authority Prime Minister Mahmoud Shtayyeh asserted that the “Deal of the Century” will be born dead and there would be no partners for the Deal. Saeb Erekat, Secretary-General of the PLO, said the Palestinian leadership rejects the US peace plan to resolve the Palestinian-Israeli conflict, adding that the Palestinians will not accept anything less than an independent Palestinian state on the 1967 borders.

Hosni Mubarak, the former President of Egypt, asserted in a press interview that Hafez Assad, the late Syrian President, could have recovered the Golan had he been willing to normalize relations with Israel and open embassies in the two countries.

A final point regarding omitting Syria in the Trump deal, it is worth recalling Henry Kissinger’s old dictum that the Arabs cannot go to war with Israel without Egypt and cannot make peace without Syria.

Elias Samo PhD is a Professor of International Relations at American and Syrian universities.

So, if Trump is imposing Zionist policies against the Palestinians and Syrians, does he not qualify to be labeled as Zionist, too?

He is in fact paying his respect to the “Q” of Zion. 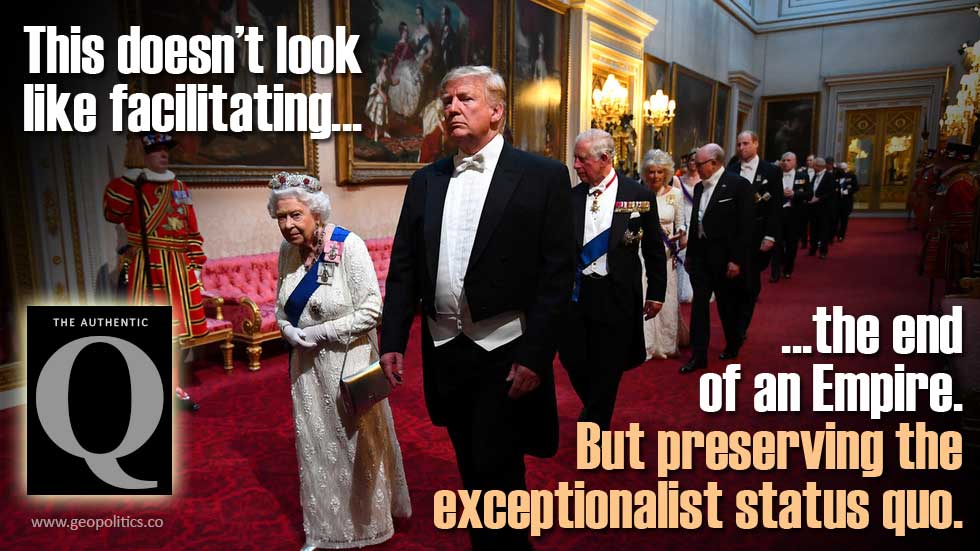