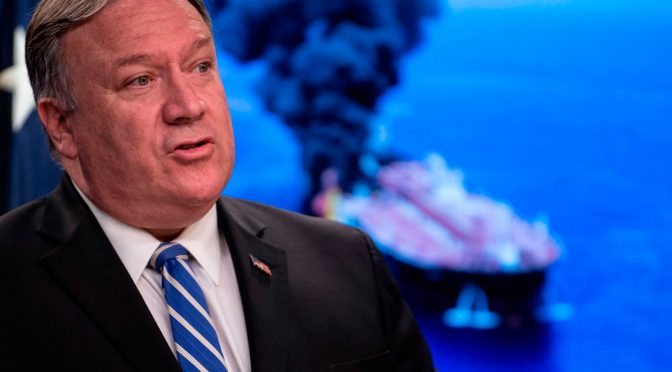 “It has Iran written all over it,” so says the tough-talking US President Donald J. Trump, who’s still fresh from his whirlwind tour across the Khazarian-controlled United Kingdom, and France.

A few days ago, a Japanese oil tanker was fired upon with rockets, while the Japanese Prime Minister Shinzo Abe was visiting Iran to defuse the tensions in the region.

Is it in the best interest of the Iranians to bomb a Japanese oil tanker at the same time that the highest Japanese official is in town?

Even the Japanese crew of the tanker are disputing the US claims.

And again, to be clear, there's currently no evidence to verify what was removed from the side of the vessel was a mine, and there's no evidence at the moment about who placed it there, so claiming it was a mine placed by the Iranians is pure conjecture at this point in time.

I have just written to the CENTCOM media desk to ask why the video the command has released does not show what happened before the moment something is removed from the side of the boat. I urge all journalists covering the incidents to do the same. It's vital for full context.

Nevertheless, Trump has been very persistent in his tirade against the Iranians, and recently in his administration’s attack against critics of the UK monarchy itself, which is of course a political interference in another country. But is he in another country at all?

This could only mean one thing, i.e. that he is a certified British asslicker operating with full permission from the highest authority of the Bauer Monarchy, and he’ll do anything to please his masters in Buckingham.

So, when it comes to Iran and China, he’s just being consistent as:

Which brings us to Ben Fulford, who is also very consistent in his stand against Assange for being a “CIA operative”, and in his latest article that says,

The visit by U.S. President Donald Trump to the UK last week has healed rifts in the Anglo alliance and will make sure the post-9/11 fascist coup in the West will be reversed, according to Pentagon and British royal family sources.

“The visit to Great Britain was very much about the entente cordiale in the Anglo-America axis and all of the ongoing issues of which you are already aware.  Brexit is a very big deal.  I would say that the trip was a success and the bonds between both countries are now stronger,” was how a British royal summed it up.

How the “Trump UK visit will lead to reversal of post-9/11 fascist trend” when it was Israel, UK, and Saudi Arabia, which executed the WTC 911 controlled demolition false flag in the first place?

How can there be “a split between the Anglo-Americans and the European fascist Nazi aristocrats behind the Bilderberg Group” when the Queen herself and her father saluted Hitler when she was still young?

There are tons of photographs and videos that can prove that the current British royalties are certified Nazis, too. Even the Queen’s subjects are Nazis.

Are both Trump and the likes of Ben Fulford, all shills of the British Empire, and therefore, are only working for the glory of the Jesuits, and the real forces behind them?

Whatever the case maybe, these people continue to play the same game, with the same ruthless patterns that always work in an uncomplicated mind.

Be always discerning in whatever you read even from this website, because there’s a great chance that we’ve all been played with, still.